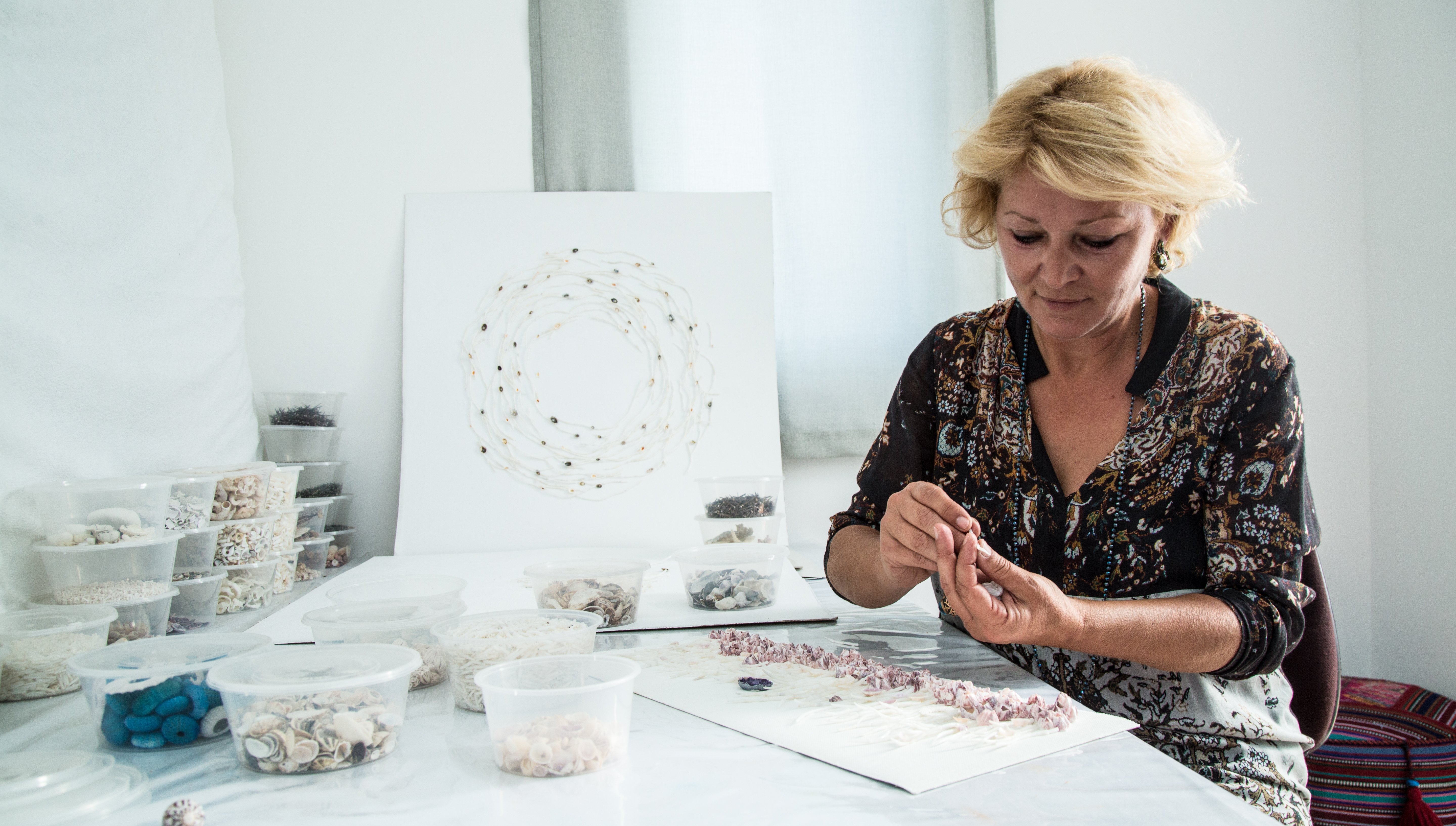 Alma De Ville loves to trudge the beaches during weekends. At the end of the long walk, she heads home with bags full of lifeless shells, fish teeth, used baits and wooden pieces with beautiful patterns that are washed ashore.

She will be busy for the next couple of days, as she cleans, dries, segregates and packs the exotic collection in huge boxes.

When creative surge pushes her, Alma quietly moves to her studio and spends hours, creating unique pieces of art that adorn the living room of her apartment in Azaiba.

“My love affair with sea shells began quite accidentally,” recounts Alma. It was in August 2010 that she first visited a beach in Muscat. When she found two nearly circle-shaped disks, it sparked her imagination. “I thought something could be made out of it. So I continued collecting more discs for the next six months.”

Slowly she learnt about the creatures in the sea bed, and where to find maximum number of sea shells through research and observation. “I collect shells that are washed ashore, or remnants that I can assemble into something,” she says.

Alma makes beautiful floral patterns from sea urchins, its teeth, broken parts and other shells collected from the beaches. One may think that she decides on the patterns well in advance, but she doesn’t work according to a plan. “I work without any plans. I just put the shells on a white canvas. A pattern evolves in due course and I just follow it. It is a spiritual process.”

“Look at those circles,” Alma points to a canvas on the wall. “They are made of tusk shells. When I began to work, two shells got stuck into each other and it naturally formed a circle. Then I decided to follow the pattern.”

Sometimes, she spends days and weeks working on a single piece. “I always play my favourite music during the creative process. It gives me the inspiration. Once I finish, I stand up and try to realise the pattern I just created,” she reveals.

Born in Bosnia and lived in London for many years, Alma had worked as an interior designer before moving to Muscat five years ago, along with her husband. “I never tried shell art before. I found it interesting after coming here, and I am enjoying it.”

Alma’s quest to collect shells has driven her to beaches in Muscat, Barka, Masirah Island, Bar Al Hikman, Dibab, Al Ashkara, Sifah, and Quriyat. She even brought about 400 big sea urchins while returning from a holiday in Zanzibar. “I took great pains to bring them to Muscat without minimal damage,” she says.

Keeping the fragile shells intact is a tedious task. “I spend hours collecting, cleaning and drying the shells. So I don’t want to waste even a single piece. If a shell breaks, I use it to create beautiful petals.”

She believes that cleaning too is a tedious process. “Different shells have to be treated differently. I use water, and peroxide to remove the organic materials from the shell.” Now, she wishes to exhibit her works at an art gallery in Muscat. “Like any artist, I love to showcase my works,” she says and adds: “these are ideal décor pieces for seafood restaurants”.