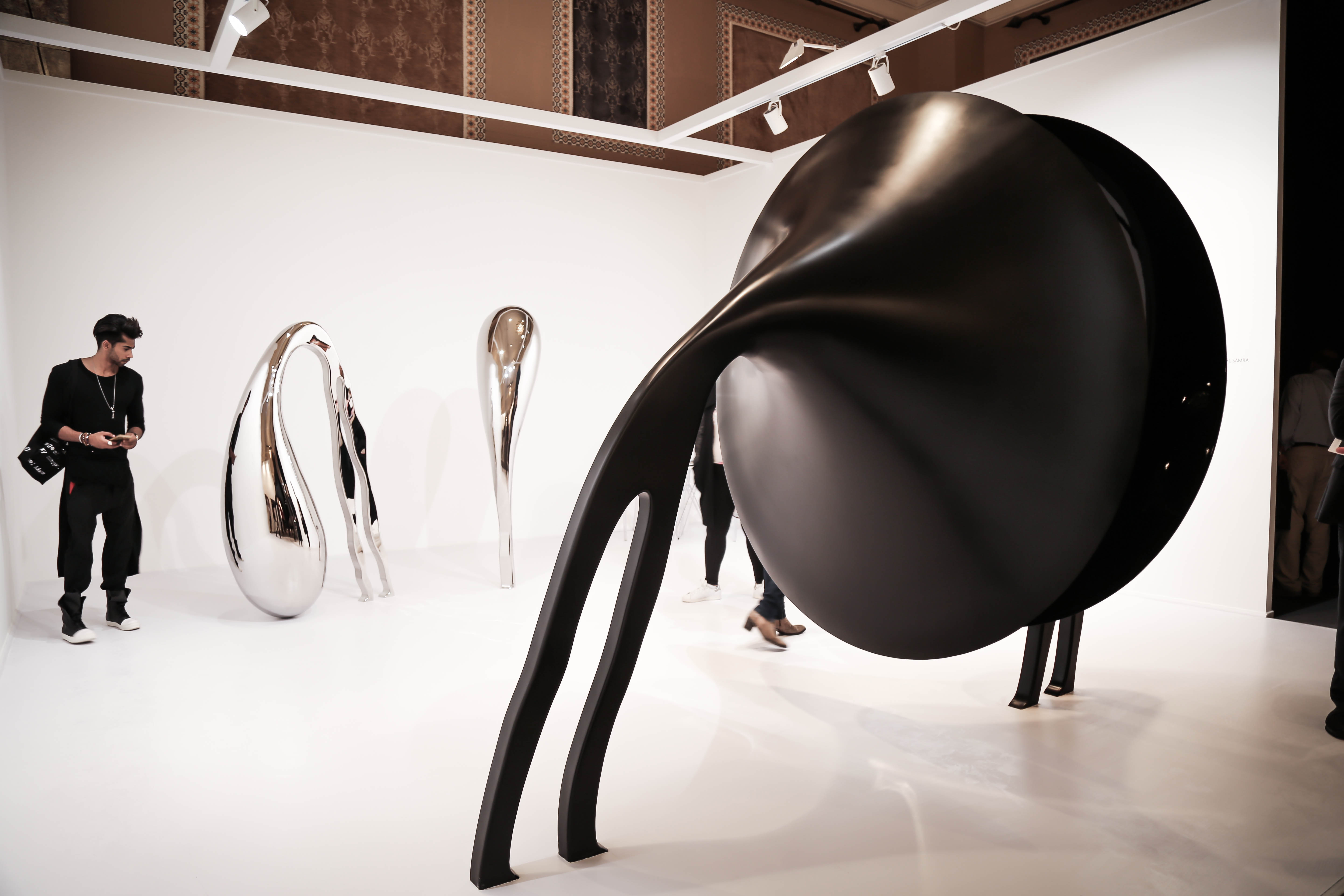 This year Art Dubai — the art fair with the greatest global reach across the Middle East, North Africa, and Asia — featured four vast galleries, three displaying Contemporary Art and one for Modern Art, whose cleverely named theme, The Future Was, examined how artists of the twentieth century shaped the future of art, which, now in the twenty-first century, we know as ‘Contemporary Art’.

In the great cities of the global world, Contemporary Art has taken a leap forward in imaginative creativity — a fact never more evident to me than it was last week at Art Dubai where ninety-four galleries with 500 artists from more than forty countries presented works that all compelled the viewer to think. Almost all the art was fascinating, or at least intriguing, and some was downright dazzlingly brilliant.

this year at Art Dubai 2016, one could not really speak of trends in the usual way, as the diversity was too great. While many of the artists came from the UAE and the GCC region, the Americas, the Far East, and a range of countries in between, were also represented. It is interesting that you could not tell where the art in a given stall was from simply by looking at it. You had to ask. And the answers, more often than not, were surprising. It could be Palestine, the Philippines, Azerbaijan, Canada, Turkey, Lebanon, China, India, the USA, or any of the thirty other countries involved. Each one represented the essence of this art fair—an unpredictable explosion of imagination. It was all about originality of concept and surprise in mode of expression.

Dubai goes all out in everything, and Dubai’s now globally popular art fair was no exception this year, providing an exhilarating experience that was as much a feast for the mind as for the eyes.
If Art Dubai 2016 says anything about the future, it would be that art is going to be more cerebral than in the past, more ingenious in concept, and more advanced in technique and artistic craftsmanship.

Architectural Mirroring, Coloured Shadows, and Loud Silence
Internationally famous Filipino artist, Roberto Chabet, invited viewers to peer inside his giant box of mirrors, titled “Trap”. When I looked over the edge into the depths of Chabet’s great box, I saw angled slices of architecturally arranged mirror surfaces that echoed endlessly in a vast universe of reflection, taking the eye inexorably into far distances that glimmered under invisible lights. There, a city of glass became the outer universe in repeating waves of creation.

“The Colour of a Shadow,” an installation by Russian couple, George & Ilya Pusenkov, is set in an utterly dark room where vivid patterns projected on screen mysteriously migrate to engulf your body, transforming you into a being of moving light and colour.

A monumental sculptured piece called “Loud and Silence” in which two enormous, blatantly black loudspeakers on human-like forms face each other with little space in between, makes one feel like the loudspeakers are blasting your ear drums, although there is no sound. For me, this installation is about people shouting at each other as they converse, even though they are close together, a fairly common, albeit unconscious, practice in this part of the world.

By contrast, in Silence, the other half of his installation, two rather beautiful gleaming chrome shapes stand a fair distance apart. They are fulsome, bulb-like humanoid forms in bloom, suggesting that silence allows thoughts to grow and fulfil inner potential. The Lebanese artist, Nadim Karam, explained that “Silence is Shout and Shout is Silence” — meaning that silence is eloquent and shouting nullifies the message, ultimately saying nothing.

Muslim Spacemen, Invasion of Toy Soldiers, and a Galactic Teddy Bear
Humour and whimsy also made an appearance at Art Dubai. A charming, cartoonish piece by Azerbaijani artist, Orkhun Hueynov, featured inlaid white figures on stretches of black enamel as Muslims venture out into space. A mosque with tapered domes becomes a rocket ship, a Muslim Spaceman meets an alien, while two others plant a flag with a crescent moon on an unknown planet. Titled “Muslim Astronauts,” this amusing work seems to bear a message about the untapped potential of the Muslim world.

‘One Gallery’ from Ramallah made a political splash by presenting a ball spiked with masses of metal-coated plastic toy soldiers fighting in a tightly packed jumble of chaos in a piece titled “Universal Soldier,” by Bashar Alroub. The piece, which was featured on the front page of the Financial Times culture section, was said to represent the overwhelming domination and frequent invasion of Israeli soldiers in Palestine.

In wandering through one of the Contemporary Galleries, we came upon an installation with a corridor of strangely beautiful vaulted arches made of millions of bottle caps. As we journey on, I looked up and saw something which at first seemed like a cross between a dark cloud and a giant amoeba. When I stood directly under the floating mass, I could see that it was an enormous, ink-blue teddy bear sprinkled with stars like the Milky Way. To cuddle that teddy bear would be to metaphorically embrace the galaxies.

The Crescendo: Muscati Artist, Radhika Khimji
The works so far mentioned were only a small sampling of the seemingly limitless array of amazing works of Contemporary Art on display at the fair, and I have saved the absolute best for last.

The solo exhibition of Muscat artist, Radhika Khimji at the Gallery Sarah stall was comprised of photography-based pieces presented on large sections of unpainted plywood that somehow endowed the images with an odd feeling of peacefulness. The photographic element, or fragments thereof, were made dimensional with materials such as wooden sticks and structures, shaped cloth, handmade paper, thickened acrylic paint, and Radhika’s signature: sewing with red thread.

The layered effect made it seem that there were many places to go within these works, hidden discoveries to be made, and elusive visual realities to be constructed and deconstructed. The colours were from a subdued spectrum: grey, sepia, brown, black, white, and a scattering of unidentifiable hues.

Because of the fusion of varied elements and modalities through an unexpected juxtapositions of photography, painting, embroidery, woodworking, and collage, Farah Asqul, the Director of Gallery Sarah, described Radhika’s pieces as hybrid works. “We don’t know where the photographs were taken or when, and Radhika doesn’t let us know,” Farah said. This perhaps adds to the sense of timelessness and the universal. In absorbing and understanding these original works, you can’t follow the thought process of the artist — you are forced to follow your own.

To me, Radhika’s Art Dubai pieces represented a fresh interpretation of what ‘art’ and ‘beauty’ might mean. They contain a unique quality that can perhaps be described as a subtle form of contemporary surrealism. They are strange, yet hauntingly familiar, like a sudden déjà vu or a dream that is almost remembered but remains elusive.

Interestingly, now, at the time of writing about Radhika’s exhibition, I do not think of individual pieces — not the sunken section of wall seeming to move or the slanting shed that reminds me of the hideouts we constructed in childhood or the moon of red thread that should be in the sky. No, I am thinking of the whole collection in one home — a family of works that someone has used to fill the walls of a room. If I were a collector with the means, I would do just that.

STAY INSPIRED
For more information on the galleries
who exhibited at Art Dubai 2016,
you can visit artdubai.ae

For more information on Radhika Khimji
and her upcoming exhibitions,
visit her website radhikakhimji.com