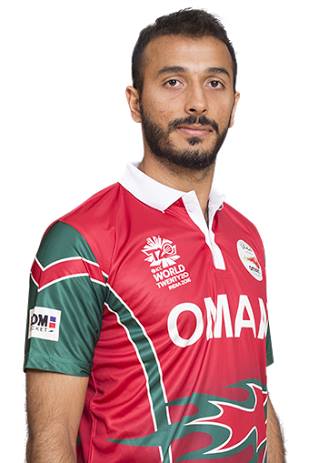 Muscat: Forcing Ireland skipper William Porterfield to play out a stingy first over (maiden) during Oman's World T20 debut, left-arm spinner Ajay Lalcheta shot into instant fame. Receiving praise from his bowling coach Sunil Joshi and also a tweet from India's ace spinner Ravichandran Ashwin, who termed the maiden over as 'golden', Ajay has come a long way.
Having knocked the doors of Saurashtra Ranji team, this Porbandar (Gujarat) lad moved to Oman for greener pastures and his cricket stint with Al Turki opened doors for him in Oman and he was vital cog of the national team during the World T20 qualifiers and preliminary round.
Now that Oman has another mission in the World Cricket League (WCL), the news that he has been named the captain of the national squad in place of seasoned campaigner Sultan Ahmed came as a surprise.
"In the morning when I heard about the news, I was initially nervous and gradually it sunk in and I was excited," said Ajay in his chat to Times Sport. "Frankly, I was not expecting it, but I am thankful to the selectors for showing faith in me," he added.
According to Oman Cricket (OC) announcement, Ajay will lead Oman in the WCL Division 5 with another experienced campaigner Jatinder Singh named his deputy.
"I am excited to lead the team, and confident to take up the responsibility," remarked Ajay, who appears to have already set sights on helping Oman rise from Division 5 and target a berth in the next World Cup, the 50-over version. Ajay, who still plays for Al Turki in the Premier Division, is confident of extending Oman's successful run. "Our training schedule begins tomorrow," said Ajay.
Wedding bells for Jatinder
For Ajay's deputy Jatinder Singh, the OC announcement came as a surprise gift. When Jatinder, who is in India preparing for his April 10 wedding, came to know about the Oman Cricket announcement, he was full of excitement while talking to Times Sport. "When I came to know that I was named vice-captain, it indeed was a good feeling," said Jatinder from India.
"I am looking forward for the tournament (WCL Div 5) and also the challenge ahead," said Jatinder, who is expected to join the training camp on April 16.
It has to be said, Jatinder has always been the back bone of Oman's batting and is certainly ideal for the 50-over format than the bang-bang shorter version.
Earlier, Oman Cricket in an official statement announced an 18-member probables list for the internal camp.
"The 18-member team will be pruned to 14 before leaving for Jersey to play in the WCL Division 5," said coach Duleep Mendis.
The tournament will be played from May 21 to 28 and Oman will be vying for honours with teams like hosts Jersey, Tanzania, Nigeria, Guernsay and Vanuatu.
The two finalists of the ICC WCL Division 5 will earn a promotion to Division 4, which is scheduled to be played later in the year.
Meanwhile, Oman Cricket expressed gratitude to Sultan Ahmed, who captained the team for some time now and guided the team to new heights in the T20 format.
"We are forever indebted to him for his commitment and services to Oman Cricket," the Oman Cricket statement said.
Omani talents
Sufyan Mahmood, who impressed one and all with his performance against the United Arab Emirates in the Asia Cup, holds on to his place as the national player of the team.
However, the inclusion of highly talented Shuaib Ismail as the second national player among the probables is a welcome move.
Shuaib, who has been impressive in the Oman Cricket League this season, was bound to get the nod and it is hoped that he will get the chance to travel with the team, which will give him a good exposure. Meanwhile, there is only one wicketkeeper in the squad in Swapnil Khadye, and a general thought is to have an additional keeper considering the longer format of the game. However, the selection committee would have thought Jatinder Singh can take the responsibility of donning the gloves if necessary.
Probables list: Ajay Lalcheta (Captain), Jatinder Singh (vice-captain), Munis Ansari, Rajesh Ranpura, Sufyan Mahmood, Bilal Khan, Khawar Ali, Zeeshan Maqsood, Syed Amir Ali, Aamir Kaleem, Adnan Ilyas, Shuaib Ismail Mohammed Al Balushi, Arun Poulose, Noorul Riaz, Mohammed Nadeem, Mehran Khan, Swapnil Khadye (wicketkeeper) and Vaibhav Wategaonkar.