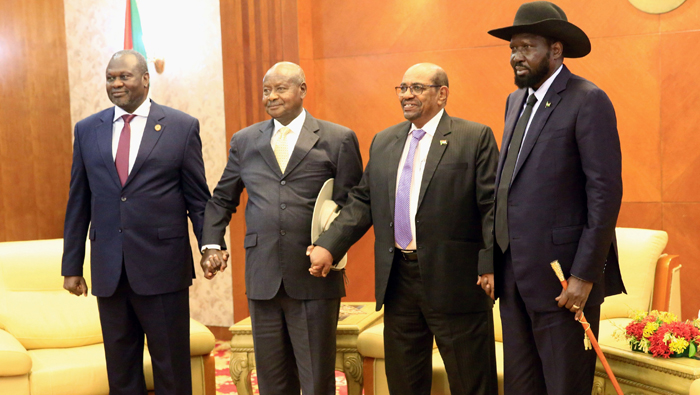 Khartoum: South Sudan's President Salva Kiir and rebel leader Riek Machar said on Monday they hoped for a breakthrough in peace talks as they met in Khartoum, but there was no immediate indication that either side would make real concessions.
"I came to this meeting with an open mind and hope my brother Riek did the same ... I see the need to stop this unnecessary war and hope Dr Riek does as well," Kiir said as talks began.
He said disagreements persisted over "division of power and security arrangements" - an apparent reference to possible rebel representation in the South Sudanese government and the "integration" of rebel and government forces.
Machar told reporters: "We came to Khartoum to look for peace", although he said his own invitation had come "late", without elaborating. South Sudan offered to allow a rebel representative to join its government on Friday, but ruled out Machar himself.
The war that broke out in 2013, less than two years after oil-rich South Sudan gained independence from Sudan, has killed tens of thousands and forced millions from their homes. Sudan's President Omar al-Bashir is convening the talks in Khartoum. Sudan has struggled economically since the oil-rich south seceded, and is now in its worst fiscal crisis for years. (Reporting by Khalid Abdelaziz, writing by John Davison in Cairo; Editing by Richard Balmforth)