One person dies after blast at Zimbabwe president's rally-state radio 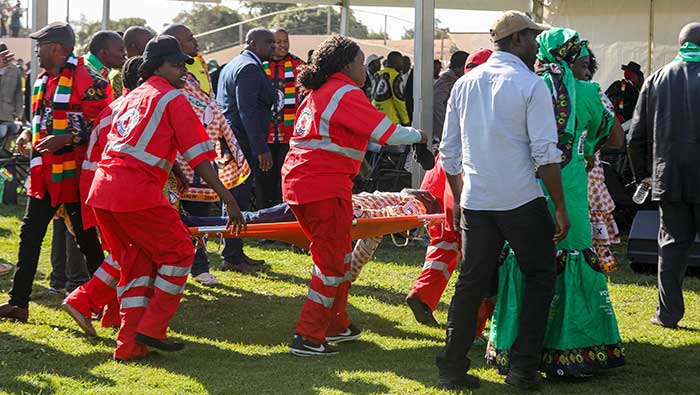 Harare: One person died on Monday from injuries after an explosion rocked Zimbabwe President Emmerson Mnangagwa's Saturday campaign rally in the city of Bulawayo, state-owned radio said.
Mnangagwa escaped unhurt and police have said they were searching for a motive for the blast that injured 49 people.
This was Mnangagwa's first rally in the opposition stronghold of Bulawayo, as the 75-year-old leader seeks votes ahead of the July 30 presidential and parliamentary vote, the first since Robert Mugabe was forced to resign after a de facto coup in November.
A ruling ZANU-PF party official said the victim was a member of the Presidential Guard, an army unit that provides close security to Mnangagwa and his two deputies.
Mnangagwa has said the blast would not stop the election, which is being monitored by foreign observers for the first time since 2002. The European Union deployed its long term observers around Zimbabwe on Saturday.
Police spokeswoman Charity Charamba and Health Minister David Parirenyatwa, who has been monitoring victims in Bulawayo hospitals, did not respond to calls for further comment.