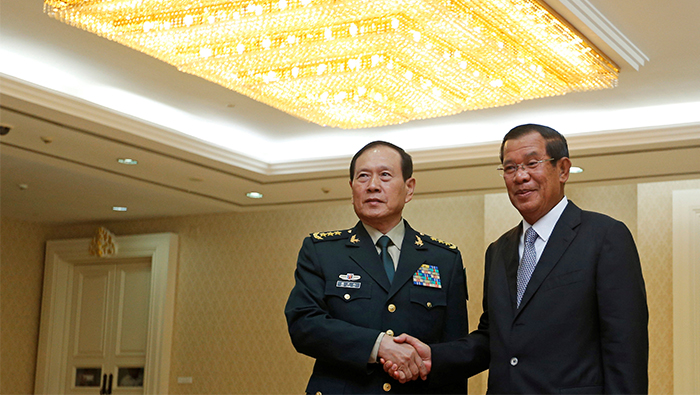 Phnom Penh: China has granted over $100 million in military aid to Cambodia, Cambodia's Defense Ministry said on Tuesday, highlighting the strong ties between Beijing and a government that critics accuse of destroying democracy ahead of an election next month.
Prime Minister Hun Sen's ruling party is expected to easily win the general election on July 29 as the Supreme Court dissolved the main opposition Cambodia National Rescue Party (CNRP) last November at the government's request.
The military aid was offered by China's defense minister Wei Fenghe, who is currently in Phnom Penh to attend a China-Cambodia military exhibition, during a visit that began on June 16 and will end on Wednesday.
Defense Ministry spokesman Chhum Sucheat said Wei "pledged more than $100 million grant" to be used for whatever Cambodia required, and that the Chinese and Cambodian armies would conduct joint exercises, dubbed "Dragon Gold", again next year .
"He didn't specify what we can buy, just for use for any necessary need," the spokesman told Reuters.
China is Cambodia's biggest aid donor and its backing has bolstered Hun Sen, who has ruled the country for 33 years.
The ban on Cambodia's opposition was condemned by the United States, the European Union and other countries. Hun Sen has accused the United States of supporting the CNRP of staging a "colour revolution" to overthrow his government.
Cambodia suspended joint military exercises with the United States indefinitely, but has held joint military drills with China twice since 2016.