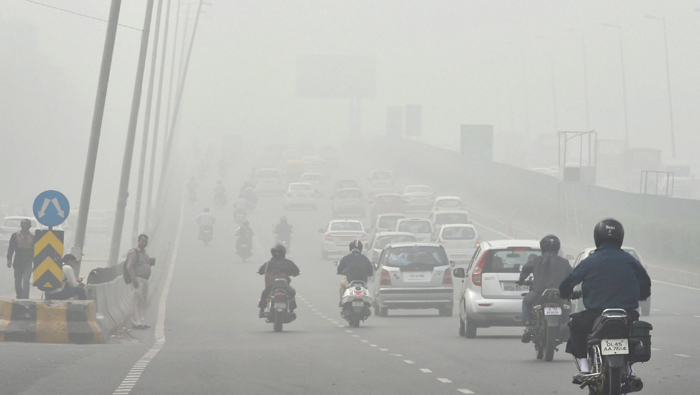 New Delhi: Air quality in New Delhi plummeted to a dangerous level on Wednesday, putting residents at risk, mainly due to dust storms from western India, a senior official at the pollution control board said.
The air quality index, which measures the concentration of poisonous particulate matter in the air, hit the "severe" level of 445, on a scale where the maximum reading is 500 and where anything above 100 is considered unhealthy by the Central Pollution Control Board, its website showed.
"Due to the high wind speeds, dust particles are being transported from Rajasthan," said V.K. Shukla, the scientist in charge of the Air Lab at the Central Pollution Control Board.
At the severe level, even healthy people will be affected while those who have existing diseases will be severely impacted, the board's website showed. "The situation is likely to remain the same for the next 2 days," Shukla said, citing the weather office's forecast.
Air quality has worsened in New Delhi in recent years, prompting Prime Minister Narendra Modi's office to directly monitor measures to clean up the capital's air.
Vehicle exhaust emissions in a city with limited public transport, emissions from thermal power stations and swirling construction dust are the main pollutants of air in New Delhi, which worsens in winter months due to illegal crop burning in the farm states surrounding the landlocked capital city.
A damning report by the World Health Organisation last month said India was home to the world's 14 most polluted cities, with Delhi ranked sixth most polluted.
According to the US Embassy's real-time air quality index, the air quality was so poor in some parts of Delhi on Wednesday that it was beyond the maximum level. It stood at 999, beyond which no readings are available, for R.K. Puram, Wazirpur and Okhla area among others.
Delhi's chief minister, who belongs to an opposition party, called the city a "gas chamber" last year as levels of airborne PM 2.5, tiny particulate matter that can reach deep into the lungs, far exceeded levels classified as "hazardous".