'US aims for major N.Korea disarmament in 2-1/2 years' 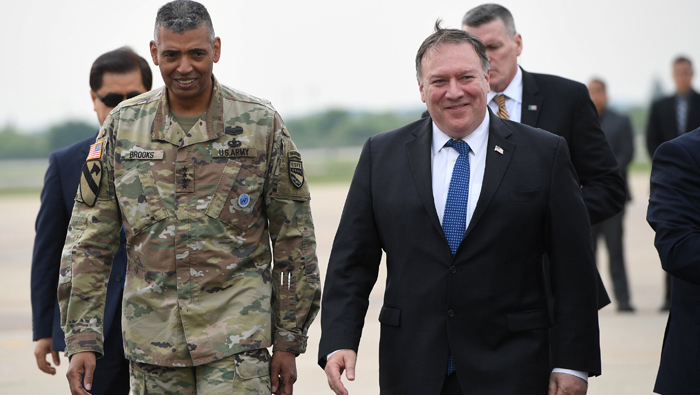 Seoul: The United States hopes to achieve "major disarmament" by North Korea within the next 2-1/2 years, US Secretary of State Mike Pompeo said on Wednesday, speaking the day after President Donald Trump met North Korean leader Kim Jong Un for a historic summit.
Trump and Kim met in Singapore on Tuesday and reached a short agreement that reaffirmed the North's commitment to "work toward complete denuclearization of the Korean Peninsula," but provided no details on when Pyongyang would give up nuclear arms or how that might be verified. Pompeo was in Seoul on Wednesday to brief South Korean officials on the summit. Speaking to a small group of reporters and asked if he would like to accomplish major nuclear disarmament within Trump’s current term, which ends on January 20, 2021, Pompeo replied: "Oh yes, most definitively. Absolutely ... you used the term major, major disarmament, something like that? We're hopeful that we can achieve that in the 2-1/2 years."
"I am ... confident they understand that there will be in-depth verification," Pompeo said, saying the initial agreement between Trump and Kim had not captured all of what had been agreed by the two sides.
"Not all of that work appeared in the final document. But lots of other places where there were understandings reached, we couldn't reduce them to writing, so that means there’s still some work to do, but there was a great deal of work done that is beyond what was seen in the final document that will be the place that we will begin when we return to our conversations," Pompeo said after flying to Seoul from Singapore.
Trump, who returned to Washington early on Wednesday, hailed the meeting with Kim, the first between a sitting US president and a North Korean leader, as a success that had removed the North Korean threat.
Critics at home said the joint statement by the two leaders was short on detail and that Trump had made too many concessions to Kim. On the way forward, Pompeo said, "I don’t know exactly what the timing will be for our next conversation with the North Koreans. I would anticipate it will be fairly quickly after we return to our home countries."
"I don’t know exactly what form that will take, but I'm very confident that by some time in the next week or so we will begin the engagement."