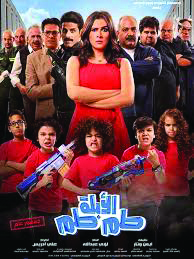 New Release:
Race 3
Cast: Salman Khan, Abhay Deol, Anil Kapoor, Jacqueline Fernandez
**media[888335]**
Race 3 is an internationally mounted saga of a family that deals in borderline crime but is ruthless and vindictive to the core. A world with twists and turns at every nook and corner will take the audience by surprise with its sheer unpredictability. When Shamsher entrusts Sikandar with a high stakes heist along with the family for support, what could possibly go wrong? We discover everyone’s real character as they change with a blink of an eye. We discover that nothing is as it seems. We discover a family on the verge of self-destruction — or is it a ploy by some outsiders. In top gear all the way... Race 3 rushes towards a high-octane climax with betrayals, fast guns, fast cars and sleek action never seen before on the Indian screen. Action and drama that leads to a shocking twist in the climax that takes your breath away.

El Abla TamTam (Egyptian)
Cast: Yasmin Abdulaziz, Hamdy Al-Merghany, Bayoumi Fouad
**media[888337]**
The film revolves around a music teacher working in a private school called Tam Tam, who is known for her weak personality in front of her students, and her reluctance to make decisions, which gets her into trouble.

A small group of former classmates organise an elaborate, annual game of tag that requires some to travel all over the country.

Adrift
Cast: Shailene Woodley, Sam Claflin, Grace Palmer
**media[888332]**
From the director of Everest and based on the true story of survival, a young couple’s chance encounter leads them to first love and then on the adventure of a lifetime as they face one of the most catastrophic hurricane in history.

Hotel Artemis
Cast: Dave Bautista, Sofia Boutella, Jodie Foster
**media[888334]**
As rioting rocks Los Angeles in the year 2028, disgruntled thieves make their way to Hotel Artemis. It’s operated by the Nurse, a no-nonsense, high-tech healer. As the violence of the night continues, the Nurse must decide whether to break her own rules.