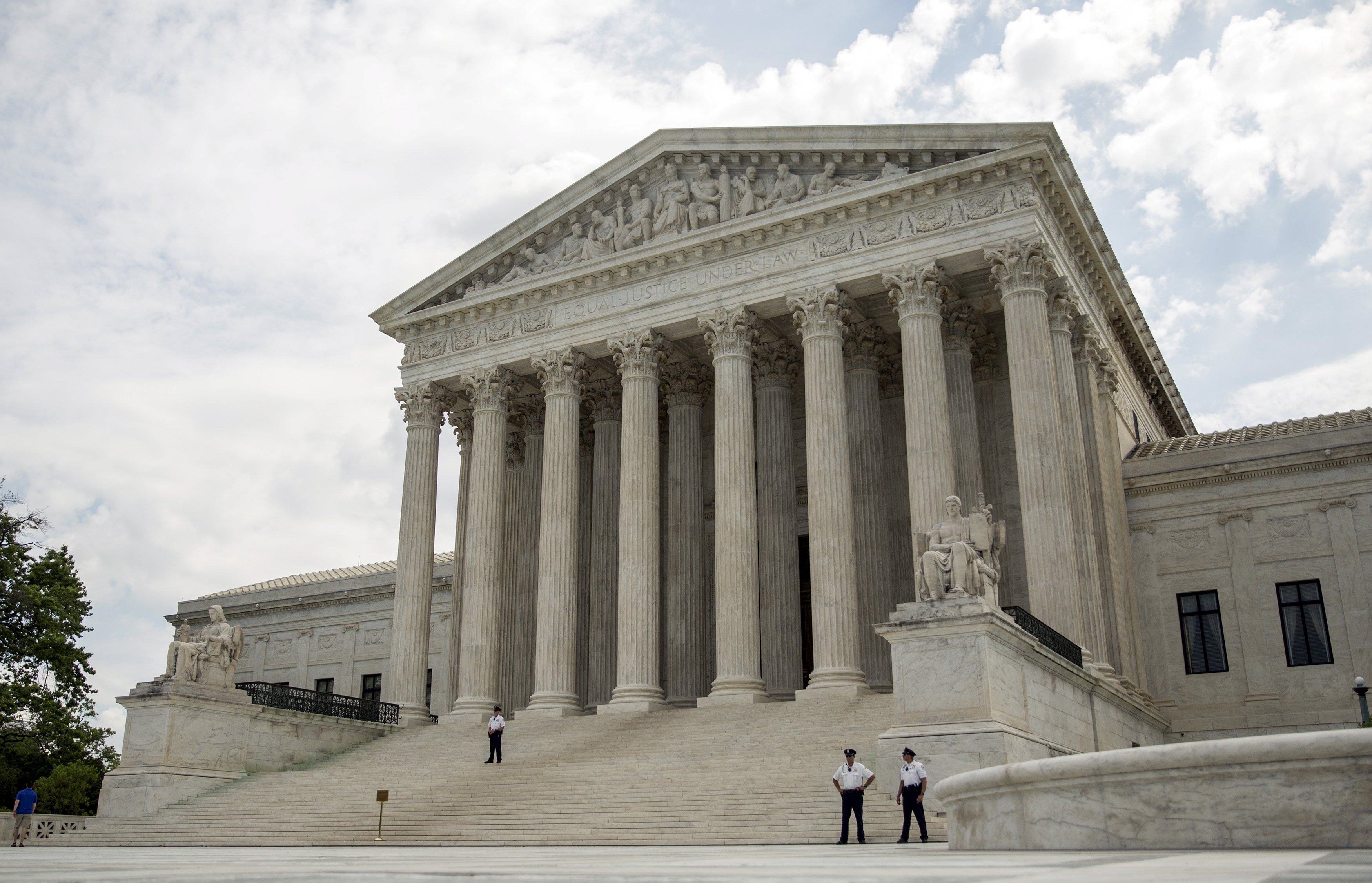 Washington: The US Supreme Court on Monday unanimously upheld the method all states use to draw their legislative districts, rejecting a conservative challenge that could have given more clout to white, rural voters.
The eight justices rebuffed a case spearheaded by a conservative legal activist brought against the state of Texas over the manner in which it carved out voting districts for its state Senate, based on a count of every resident rather than just eligible voters.
They ruled that Texas, in drawing the districts, did not violate the long-established legal principle of "one person, one vote" endorsed by the Supreme Court in the 1960s during the era of the US civil rights movement.
Writing for the court, liberal Justice Ruth Bader Ginsburg stated that elected legislators "serve all residents, not just those eligible or registered to vote." Ginsburg said non-voters, including children, have "an important stake in many policy debates," including education, and sometimes need help navigating government bureaucracy.
A victory for the conservative challengers in the case Evenwel v. Abbott could have shifted influence in US state legislative races away from urban areas that tend to be racially diverse and favour Democrats to rural ones predominantly with white voters who often back Republicans.
The policy of counting all residents and not just those who are eligible voters boosts the electoral influence of locales, typically urban and heavily Hispanic, with significant populations of people ineligible to vote.
People ineligible to vote include legal and illegal immigrants as well as children and certain convicted criminals.
Nina Perales, vice president of litigation with the Mexican-American Legal Defense and Education Fund, described the ruling as a "clear and important victory" that "protects the right of all people across the US to be represented by their officials and be counted when electoral maps are drawn."
Two of the court's conservatives, Clarence Thomas and Samuel Alito, concurred only in the judgment and did not sign on to Ginsburg's opinion.
The court is one justice short following the February 13 death of conservative Justice Antonin Scalia, but the unanimous vote suggested his presence would not have substantially affected the outcome.
At issue in the case was whether equality of legislative representation necessitates equal numbers of all residents in voting districts regardless of whether they are eligible to vote or equal numbers of eligible voters.
Adopting a new approach "would upset a well-functioning approach to districting that all 50 states and countless local jurisdictions have followed for decades, even centuries," Ginsburg wrote.
The ruling does not foreclose states trying different approaches in future.
Two Texas voters, Sue Evenwel and Edward Pfenninger, were recruited by conservative legal activist Edward Blum to file the lawsuit.
Evenwel was a member of the Texas Republican Party's executive committee and Pfenninger worked as a security guard.
Both lived in rural voting districts.
"We are disappointed that the justices were unwilling to re-establish the original principle of one-person, one-vote for the citizens of Texas and elsewhere," Blum said in a statement.
The challengers said the state Senate redistricting map signed into law by a Republican governor in 2013 failed to equally distribute voters, improperly expanding the voting power of urban areas.
They asserted that the state's system violated the guarantee of equal protection under the law under the Constitution's 14th Amendment.
Caroline Fredrickson, president of the liberal American Constitution Society, said the court "wisely rejected an effort to dilute the political representation of minorities and children."
She added that it was important for the court to endorse voting rights at a time when Republican states have enacted new restrictions, including identification requirements, that Democrats say disproportionately affect minorities.
The dispute did not involve US congressional districts.
The Constitution requires seats in the US House of Representatives to be distributed based on a state's total population, not just eligible voters.
The Obama administration supported the Texas plan. Blum's group, the Project on Fair Representation, also orchestrated a lawsuit from Shelby County, Alabama that in 2013 led the high court to invalidate a portion of the 1965 Voting Rights Act mandating federal approval for election law changes in states with histories of racial discrimination.
It also backed another important case heard by the Supreme Court in December, a white woman's challenge to a University of Texas admissions policy that considers an applicants' race among other factors in an effort to enroll more minority students.
The court has not yet ruled in that case.