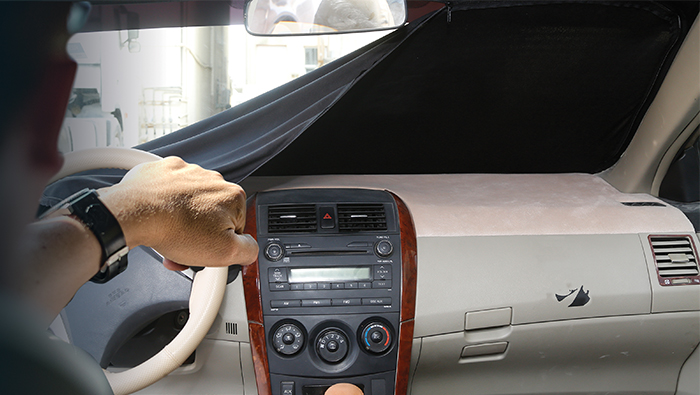 Muscat: The number of accidents on our roads fell by almost 40 per cent in April 2018, compared to the same month last year, as drivers appear to be taking heed of safety warnings, thanks to the Royal Oman Police (ROP).
Read here: Road accidents in Oman down by nearly 40 per cent last month
The welcome news came as ROP traffic officers called on motorists to stop using sun shades while driving, as temperatures start to climb. With temperatures soaring to above 40 degrees Celsius and summer upon us, many drivers use fixed curtains or removable sun shades on the windscreens of their cars. Most use them only when the vehicle is parked, but some put their lives at risk by using them while driving.
One worried expat said: “I keep seeing it. The entire windshield is covered with a shade, except for a gap on the driver’s side that he or she can see through. You see it on the highway a lot. I suppose people think they’ll stay in the same lane and so put the shade up for some added relief from the sun. It’s so dangerous. Every time I see it, I worry for the people in the car, and those around them.”
Ali Al Barwani, Chief Executive Officer of Oman Road Safety Association, said: “Many people do not realise that using a curtain on the windscreen to protect their vehicle does not have a significant effect on reducing heat.”
“There are other methods such as slightly opening the window, parking under the shade and making sure the ventilation system works properly, that will provide better results,” he added.
“If a person wants to drive safely, clear vision through the windscreen is very important to control the vehicle. If a person places anything on the windscreen, even if part of it is open, it means the vision will be limited,” Al Barwani said.
To ensure the safety, a person must be able to see 100 per cent of his/her windscreen; if a material is placed that hinders 10 or 20 per cent, it will affect the driver’s overall vision.
“Hundred per cent vision is always encouraged. Do not limit your vision by adding barriers,” he added. An ROP spokesman said: “The fine for using anything that completely obscures the vision inside a vehicle is OMR10. Anything that blocks or minimises the view in a car is not allowed, with the exception of the traditional tint that does not exceed 30 per cent.”
According to the Public Authority for Civil Aviation, temperatures on June 5 reached 44 degrees Celsius in Buraimi and Samail, 42 degrees Celsius in Ibra and Sur, 41 degrees Celsius in Nizwa and 37 degrees Celsius in Muscat.
The ROP’s latest advisory comes as road accidents in Oman dropped by 39.8 per cent in April this year, compared with 2017, according to statistics provided by the National Centre for Statistics and Information (NCSI) and the ROP.
By the end of April 2018, a total of 797 road accidents were recorded in the Sultanate, down by 39.8 per cent when compared to the 1,323 accidents that took place in April 2017.
“We are trying our best to do better and bring the number of road accidents to zero very soon. It is always painful to see people succumbing to injuries or losing their lives on the road,” said Al Barwani.
“However, it is great to see the number of road accidents going down. This proves that we are on the right track; needless to say, it wouldn’t have been possible without the support and contribution of everyone living in the Sultanate. This indeed encourages us to do more, and I firmly believe that with the right approach and factors, this could be achieved very soon,” he added.
According to Article 33 of the new regulations included in the traffic law that was implemented on March 1, 2018, “No additions shall be made to the vehicle, such as reflective glass, curtains or any additions on the windscreen.”
With the summer heat picking up, drivers may be tempted to try to shade the interiors of their cars. However, motorists should think twice, as doing so is not only illegal, it is also dangerous as it obscures the vision of drivers and puts them and others at risk.
One driver who uses sun shades said, “The price of such materials is low and some believe it is worth it. I like using the curtain, but I only use it when the car is parked. When I am on the road, I ensure it is removed.”
Noora Al Salhi, another driver who uses a curtain to protect the inside of her car, said, “I bought the curtain for OMR3, I use it so my dashboard does not get affected by the sunlight or heat,” she said.
“The curtain is also helpful when I park to order food and I do not want the people outside to look into my car. But I make sure that I keep it completely open when I drive,” Al Salhi added.