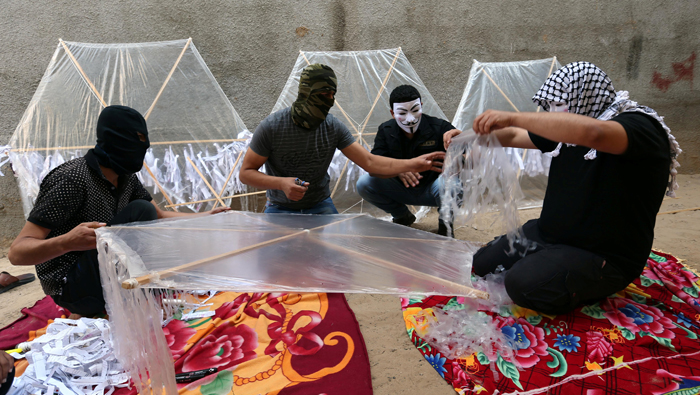 Israel-Gaza Border: Palestinians are sending kites dangling coal embers or burning rags across the Gaza border to set fire to farmland and forests, in a new tactic that an Israeli minister said should be countered with "targeted assassinations".
At least 120 Palestinians have been killed by Israeli troops during mass demonstrations along the Gaza border since March 30 and the men sending the kites over the fence believe they have found an effective new weapon.
"It began spontaneously. We never thought we would achieve such good results," said Shadi, one of five Palestinian teenagers preparing kites with fabric dipped in diesel and lubricant oil in a Gaza field.
"The idea is simple: use the simplest tools to cause damage and losses on the Occupation (Israel)," said Shadi, 19, wearing a "V for Vendetta" mask favoured by protesters in many parts of the world and who, like the others, declined to give his last name.
No one has been hurt by the fires, but some 2,250 acres (910 hectares) of fields and nature reserves, already parched after a dry winter, have been burned by flames stoked by Mediterranean winds, causing $2.5 million in damage, Israel's government said.
Public Security Minister Gilad Erdan said Israeli snipers should shoot the kite flyers. "I expect the IDF (Iraeli army) to handle these kite-flyers exactly as they would any terrorist, and the IDF’s targeted assassinations must also apply to these kite-flyers."
Israel has drafted in civilian drone enthusiasts as army reservists, instructing them to fly their remote-controlled aircraft into the kites, an Israeli general said. "If their drone ends up getting lost in the process, we compensate them," he told Reuters, speaking on condition of anonymity.
The army has also fitted larger surveillance drones with weighted fishing lines or blades that can snag or slash kite strings in mid-air, the general said. But he acknowledged the limitations of such measures, saying: "We'll probably end up having to shoot kite-flyers too."
Daniel Ben-David, a forestry official for Israel's quasi-governmental Jewish National Fund, said some kites had been decorated with Palestinian national colours, but more recently were made of transparent nylon sheeting. Some had leaflets attached.
"Prepare for a scorching summer," read one, in Hebrew. In Gaza, kite-maker Shadi confirmed that transparent plastic was the best material as it made the kites almost invisible against the sky. Even if the protests wind down, he and others will continue to send the kites - some of which carry the photos of Palestinians killed in the demonstrations - he said.
"Each kite costs us 10 shekels ($2.80). We pay it for it out of our own pockets," Shadi said. A senior White House envoy, Jason Greenblatt, described the kites as "not harmless playthings or metaphors for freedom (but) propaganda and indiscriminate weapons".