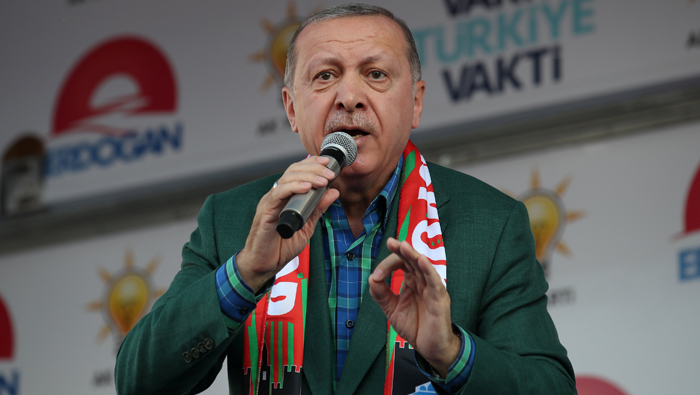 Ankara: Turkey's President Tayyip Erdogan is seen failing to get the majority he needs to win a June 24 presidential election in the first round, but is expected to gain a majority in the second round two weeks later, a survey by pollster SONAR showed on Tuesday.
Turks will vote in both parliamentary and presidential elections later this month after Erdogan, the president, declared a snap election in April. After the vote, Turkey will switch to a powerful executive presidency that was narrowly approved in a referendum last year.
The survey of 3,000 respondents in 26 of Turkey's 81 provinces showed Erdogan receiving 48.3 per cent of votes in the first round, with the main opposition party candidate, Muharrem Ince, seen at 31.4 per cent. The poll was conducted between May 29 and June 3.
More than 53 per cent of respondents said they would vote for Erdogan against Ince in the second round. In the parliamentary vote, Erdogan's ruling AK Party was seen earning 42.2 per cent. Its alliance partner, the nationalist MHP, was expected to garner 7.1 per cent of votes.
The survey showed the rival alliance of the main opposition CHP getting 39.5 per cent. The secularist CHP's alliance partners are the newly founded Iyi (Good) Party and the Islamist Saadet (Felicity) Party.
The pro-Kurdish HDP, whose former leader Selahattin Demirtas is jailed facing up to 142 years in prison, was seen earning exactly 10 per cent, the threshold needed to enter the parliament.
The HDP's performance in the parliamentary polls is important because it does not have an alliance partner. Therefore, if it fails to cross the threshold its seats go to the party that came in second in the election district. That would most likely benefit Erdogan's ruling AKP, which is also strong in the east and the mainly Kurdish southeast.