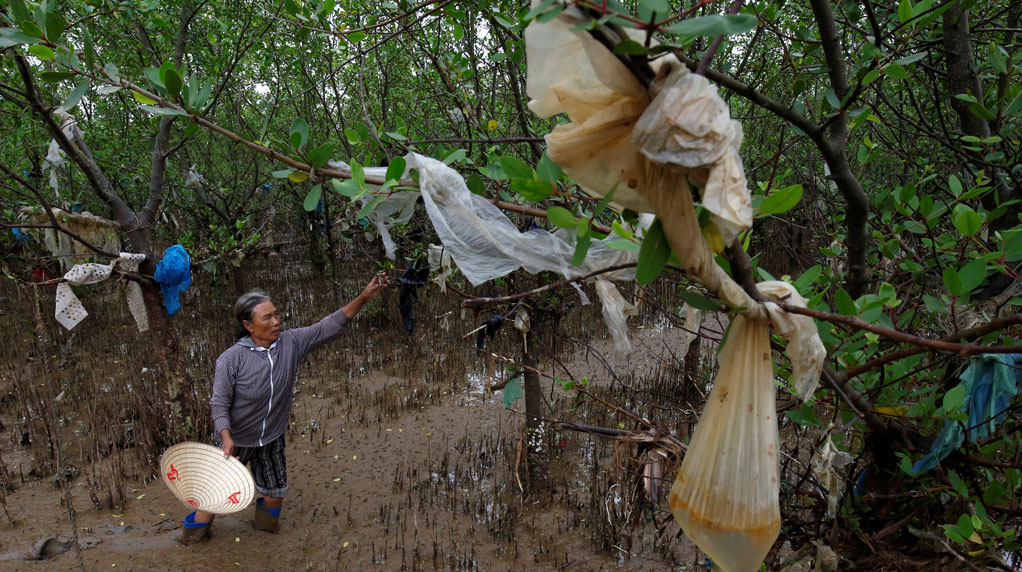 Bangkok: On her lunch break, Bangkok office worker Chinapa Payakha emerges from a 7-Eleven store with two plastic bags.
One holds a Big Gulp soft drink. The other carries her lunch, with a banana in its own plastic wrapper.
"For office life, plastic bags are necessary," said Chinapa, 34, whose shopping habits illustrate the challenges facing anti-plastic campaigners in Thailand, where plastic bags are handed out in abundance on any visit to a shop or market.
As World Environment Day on Tuesday takes place and the United Nations calls for the "biggest-ever worldwide cleanup" of plastic pollution, experts are focused on Southeast Asia, home to four of the world's top marine plastic polluters.
From major cities like Bangkok and Jakarta to beach resorts in the Philippines and Vietnam, plastic bags and bottles are the ubiquitous face of pollution in the region.
Globally, some eight million tonnes of plastic is dumped into the ocean every year, killing marine life and entering the human food chain, according to the U.N. Environment Programme.
Five Asian countries - China, Indonesia, the Philippines and Vietnam and Thailand - accounted for up to 60 per cent of the plastic waste leaking into the ocean, according to a 2015 report by the environmental campaigner Ocean Conservancy and the McKinsey Center for Business and Environment.
The five economies have "generated exploding demand for consumer products", the report said, but lacked the waste management infrastructure to cope with the surge in plastic garbage.
Three years on, a "trash emergency" on the Indonesian island of Bali and the Philippines' decision to close the tourist island of Boracay showed governments are recognising the impact of plastic waste, said Susan Ruffo, Ocean Conservancy's managing director for international initiatives.
"But this is not just a government responsibility - corporations, civil society and citizens all have a part to play," she said, adding that engagement was improving.
In Thailand, where two million tonnes of plastic waste is produced a year, plastic is an "addiction," said Geoff Baker, an anti-plastic campaigner with Grin Green International.
"Everywhere you go they just throw plastic at you," said Baker, who caused a stir on social media in April when he covered himself in 700 plastic bags, walked into a 7-Eleven and stared disapprovingly at people buying plastic-wrapped bananas.
The recent death of a pilot whale in Thailand with 80 pieces of plastic rubbish in its stomach garnered headlines locally, but drew more attention outside the country.
Still, some Bangkok residents say companies are not doing enough to address the problem of plastic pollution.
Watcharapon Prabsangob, a 28-year-old engineer, emerged from a store with a small bag carrying a coffee drink and straw.
He said he tried to refuse the bag but the clerk moved too fast.
He said that businesses should do more to stop customers from taking plastic bags.
CP All, which has over 10,000 7-Eleven stores across the country, said it would launch a campaign on Tuesday to reduce plastic bags in some outlets in the southern province of Satun as part of a green tourism campaign.
It made no mention of the other 76 provinces including Bangkok, where 10 million residents use 80 million plastic bags a day, the capital's administration says.
The food retailer Tesco Lotus said it would offer redeemable points from Tuesday to customers who do not take a plastic bag at check out.
But the scheme runs out at the end of June.
Months after the military seized power in a 2014 coup, the junta made waste management a priority and set goals for 2021.
They included cutting the use of plastic bags and bottles in government agencies and businesses, and plastic bans in tourist destinations.
A tax on plastic bags was also mentioned, along with a target to recycle up to 60 per cent of plastic by 2021.
Baker said he has "yet to see any real change coming from these promises".
But a spokesman from the government said it was committed to minimising plastic use.
"We have been trying to raise awareness. People are so used to the convenience of plastic that they don't think about the consequences," said the spokesman, Weerachon Sukhonpatipak.
Other governments have set ambitious goals too. Indonesia, ranked second behind China in the 2015 study of mismanaged plastic waste from populations living near coastal areas in 192 countries, has pledged $1 billion a year to reduce marine plastic debris by 70 per cent by 2025. There have been several attempts to impose taxes on plastic packaging to help address the waste problem. Industry Minister Airlangga Hartarto has opposed the tax measures, saying in January it would hurt the local food and drink industry.
In the Philippines, the threat to marine life should be a "wake-up call" for people to cut their use of plastic, said Jonas Leones, a senior official in the environmental department.
The Philippines, like its regional neighbours, has not imposed a nationwide ban on plastic bags, but some local authorities regulate their use. Some shopping malls have also replaced plastic with paper bags and encouraged reusable bags.
In Malaysia, the new housing and local government minister, Zuraida Kamaruddin, said in an interview with the local news website Malaysiakini that she wants to introduce a nationwide ban on plastic bags within a year.
Anchalee Pipattanawattanakul, an ocean campaigner with Greenpeace in Southeast Asia, said the region needs a coordinated strategy on plastic waste.
"ASEAN says the problem needs to be addressed," she said, referring to the Association of Southeast Asian Nations.
"But there is no action plan that will actually decrease the use of plastic".