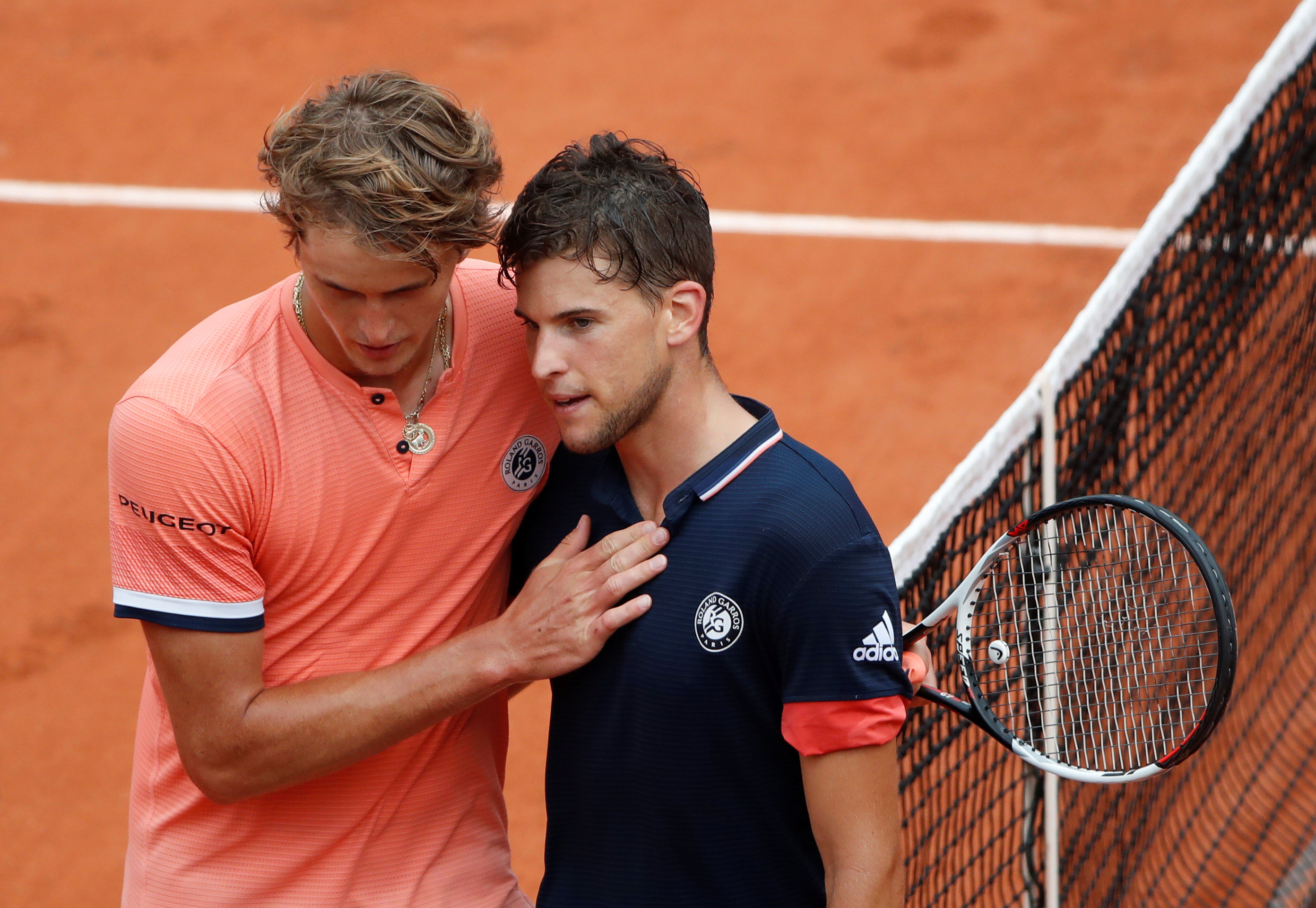 Paris: Austrian Dominic Thiem destroyed a lacklustre and battle-weary Alexander Zverev 6-4, 6-2, 6-1 on Tuesday to reach the French Open semifinals for the third consecutive year.
Claycourt specialist Thiem’s relentless accuracy from the baseline proved too much for second seed Zverev who looked jaded after a gruelling path to his first Grand Slam quarterfinal.
After an even start full of high quality ball-striking, Thiem broke serve at 3-3 and quickly got on top, stretching his opponent all over Court Philippe Chatrier.
Second seed Zverev, 21, needed his left thigh strapped in the second set and looked disconsolate as Thiem widened his advantage with a clinical display of hitting.
Thiem, seeded seventh, needed only 15 minutes to go 4-0 up in the third with Zverev barely running for wide balls.
Zverev began to let rip, snatching one game back, but the outcome was inevitable and Thiem put him out of his misery with a routine backhand winner into a wide-open court.
“It was very tough for him today,” Thiem, who fell to eventual winners Djokovic and Rafael Nadal in the last two years, said on court. “He is one of the fittest guys on Tour but to play three five-setters in a row is tough in Grand Slam.
“I love it here and I will do everything to make one more step this year.”
Thiem, 24, will play either Djokovic or Italian Marco Cecchinato hoping to become the first Austrian to reach a Grand Slam final since Thomas Muster in 1995.
Zverev had needed five sets to beat Dusan Lajovic, Damir Dzumhur and Karen Khachanov and his first-week graft caught up with him on a damp and cool Tuesday.
Thiem lost to Zverev in the Madrid final but is the only player to beat Nadal on clay this year and he oozed confidence from the outset against the tall German.
Striking the ball harder and with more spin and holding serve with ease he always looked the more likely player to make the first move and his chance came in the seventh game.
Forehand error
A forehand error by Zverev offered up a couple of break points and Thiem converted with a dipping crosscourt backhand that left Zverev wrong-footed.
Zverev saved one set point on the Thiem serve at 5-4, racing to dig up a drop volley, but was powerless on the next as Thiem flung down an ace.
The signs were worrying for Zverev as he carelessly conceded serve at 1-1 in the second set, slicing a backhand wide.
Thiem’s first sign of frailty came in the next game when an under-cooked dropshot and double-fault offered Zverev the chance to break back but the Austrian won a superb rally with both players at the net.
Zverev then watched a Thiem lob land smack on the baseline as he fell 3-1 behind and his energy levels dropped.
After dropping serve to trail 4-1 Zverev called for the trainer and had a bandage applied to his left leg - hardly surprising considering the way he had been moved around by his close friend.
Zverev went off court for more treatment at the end of the second set but any chance of him becoming the first player to win four consecutive five-set matches in a Grand Slam during the professional era were over.
With Nadal’s coach Carlos Moya an interested spectator Thiem moved swiftly on to a victory that will not have gone unnoticed by the defending champion.