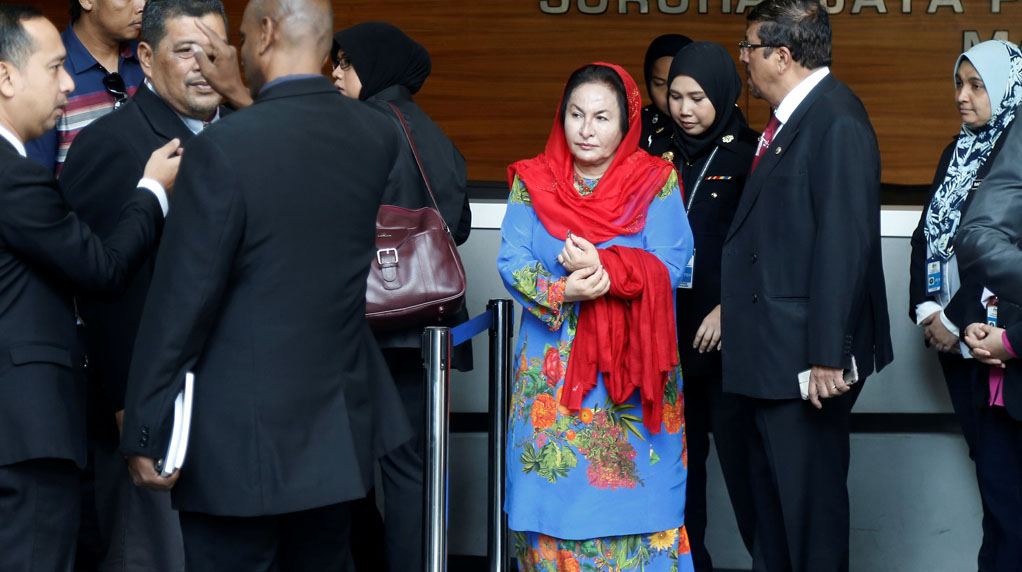 Kuala Lumpur: Malaysians who voted scandal-tainted prime minister Najib Razak out of office last month were treated to the sight of his allegedly high-spending wife Rosmah Mansor submitting herself to questioning at the anti-graft agency headquarters on Monday.
The former first couple were barred from leaving the country following the May 9 election as investigators relaunched a probe into how billions of dollars went missing from a state fund founded by Najib.
Whatever awkward questions Rosmah, 66, faced during a three-hour interview with investigators, she showed no sign of being discomfited as she left the Malaysian Anti-Corruption Commission building.
Wearing a bright blue traditional dress, with a red scarf swept over her head, Rosmah stepped lightly into her Mercedes and waved to the TV cameras, leaving her lawyers to issue a brief statement.
"The over three-hour long process went well," her lawyer K.Kumaraendran said."Our client will extend further cooperation as and when sought by the agency."
Given her penchant for super-expensive handbags, eyes were inevitably drawn to the red bag on her arm when she arrived at the MACC. It appeared to be a Versace, rather than a Hermes Birkin bag, the model that police found scores of during their searches of properties linked to Najib and Rosmah last month.
The bag was instantly trending on Malaysian social media groups, and some identified it as a Versace Demetra estimated to cost about $2,500.
Rosmah's opulent lifestyle and shopping sprees have angered Malaysians who have struggled to cope with rising living costs over the past decade.
Many have compared her with Imelda Marcos, who left behind more than 1,200 pairs of shoes when her husband Ferdinand Marcos was ousted as president of the Philippines in 1986.
She was accompanied by her daughter Nooryana Najwa and her son-in-law Daniyar Nazarbayev, a nephew of the president of Kazakhstan.
Najib, 64, has already made a series of statements to anti-graft investigators tracking the money trail from 1Malaysia Development Berhad (1MDB).
Attention has shifted to Rosmah after police found hundreds of luxury handbags, jewelry and cash totaling 114 million ringgit ($28.6 million) during raids on apartments linked to the family.
Items such as Birkin handbags from Hermes and watches were among the items seized, police said. The police did not say who the bags belonged to.
Birkin bags, favoured by celebrities like Victoria Beckham, can be worth up to hundreds of thousands of dollars.
Designer handbags with brand names like Chanel, Louis Vuitton and Oscar de la Renta were also seized from Najib's private residence, along with luxury watches, local media reports said.
Rosmah gave a statement to anti-graft investigators on Monday in connection with a suspicious transfer of about $10.6 million into Najib's personal bank account that has been traced to the former 1MDB unit SRC International.
The sum is just a fraction of the billions of dollars allegedly siphoned from 1MDB.
He has denied any wrongdoing and was cleared of any offence in an earlier Malaysian enquiry, but on Tuesday the attorney-general who had cleared him was replaced by the new government's nominee, Tommy Thomas.
A changing of the guard also loomed at the central bank, as the government was discussing exit terms for Governor Muhammad Ibrahim and an announcement could be made as early as Wednesday, people aware of the discussions said.
Piling more pressure on Najib, Malaysia's new finance minister Lim Guan Eng revealed plans to report to the anti-graft agency upfront payments of 8.25 billion ringgit ($2 billion) or 88 per cent of the total value of two pipeline projects awarded to China Petroleum Pipeline Bureau (CCPB), although they are less than 15 percent complete.
Earlier on Tuesday, some lawyers representing Najib and Rosmah on the SRC case said they had quit.
M. Puravalen, a lawyer acting for Najib and Rosmah in connection with the SRC investigations, told Reuters he had "ceased acting" for Najib and Rosmah.
He said a second lawyer, Yusof Zainal Abideen, had also quit. News site The Malaysian Insight reported that Puravalen, Abideen and other members of their legal team had walked out because they failed to reach common ground with Najib on several issues.
Abideen could not be reached immediately reached for comment. Najib and Rosmah could also not be reached for comment.
1MDB is also the subject of money-laundering probes in at least six countries, including the United States, Switzerland and Singapore.
The U.S. Department of Justice alleged in civil lawsuits last year that some of the funds stolen from 1MDB were used to buy jewelry for Rosmah: $27 million for a rare pink diamond and another $1.3 million for 27 gold necklaces.
Her son Riza Aziz, Najib's stepson, was also named in the DoJ investigation. He has denied any wrongdoing, but his company, Red Granite Pictures, paid the US government $60 million to settle a civil lawsuit that sought to seize assets allegedly bought with money stolen from 1MDB. Red Granite produced the 2013 film, "The Wolf of Wall Street".