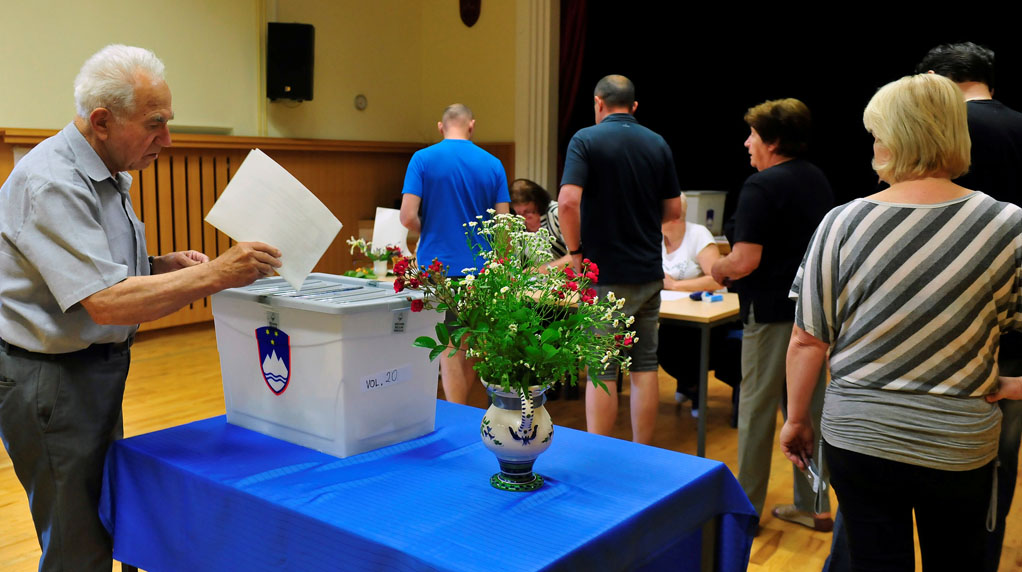 Ljubljana: The head of the anti-immigrant party tipped to win a national election in Slovenia on Sunday said forming a government would not be easy, as he cast his vote in a town in the country's east.
In a highly fragmented ballot for which early returns suggested turnout would be higher than four years ago, the Adriatic state's 1.7 million-strong electorate is choosing between 25 parties.
Latest opinion polls put the centre-right Slovenian Democratic Party (SDS) first on up to 24.5 per cent.
But its hardline stance on immigration means it is short of potential coalition partners, and its leader acknowledged any post-election negotiations would be difficult.
"We will probably have to wait for some time (after the election)... before serious talks on a new government will be possible," Janez Jansa - a two-time prime minister - told reporters after voting in Sentilj pri Velenju.
Marjan Sarec, whose centre-left newcomer party the List of Marjan Sarec (LMS) was running second on up to 18.1 per cent, also expressed hope of taking a share of power.
"We will be pleased ... if we will be able to take part in forming the government," Sarec said after voting in the city of Kamnik, where he is mayor. He has ruled out joining a Jansa government, as have most other parties.
The divided nature of the vote means the SDS would need to ally with at least two other parties to gain a majority in the 90-seat parliament.
The election commission said turnout by 0900 GMT was 17.3 per cent compared to 15.4 per cent in the last election four years ago, when 51.7 per cent of the electorate ended up voting.
Polls close at 1700 GMT when state broadcaster TV Slovenia will publish exit polls, and the election commission is due to issue a preliminary result by 2100 GMT.
The ballot was called in March after centre-left Prime Minister Miro Cerar resigned, weeks before the scheduled end of his term of office, after the Supreme Court ordered a new referendum on a railway investment project championed by his government.
A Mediana poll published by daily newspaper Delo on Friday had Cerar's Party of The Modern Centre running third.
The SDS, which has the open support of Hungary's nationalist Prime Minister Viktor Orban, is firmly opposed to quotas for migrants and says most of the money used to support them should be diverted to the security forces.
"We believe that today a first step will be made towards Slovenia becoming a country that will put the well-being and security of Slovenians first," Jansa said.
Analysts said the SDS would win, but predicting what the future government might look like was hard and another election could not be ruled out. "It seems clear that the SDS will win but everything else about this election is unclear because the question is whether the SDS will be able to form a government coalition," said Meta Roglic, a political analyst with daily Dnevnik.
Otilia Dhand of political risk advisory firm Teneo Intelligence described the election as an open race.
"The real winner will be the party that can form a coalition with a majority of seats in a likely highly fragmented parliament," she said.
Slovenia, which narrowly avoided a bailout for its banks in 2013, returned to growth in 2014.
The outgoing government expects the economy to expand by 5.1 per cent this year.
High on the agenda for the next government will be the privatisation of the country's largest bank, Nova Ljubljanska Banka, which the previous administration agreed to sell in exchange for European Commission approval of state aid for it in 2013.
The next cabinet will also be expected to reform an inefficient state health sector and Slovenia's pension system.
"I want changes for the better, particularly in the health sector and judiciary. I was quite disappointed with the current government so I will not vote for them," said Sonja, a 60-year-old retired teacher who voted in Ljubljana. Others praised the outgoing government.
"I hope we get another centre-left government although I do agree changes are needed particularly in the health sector," said 52-year-old pharmacist Vida.