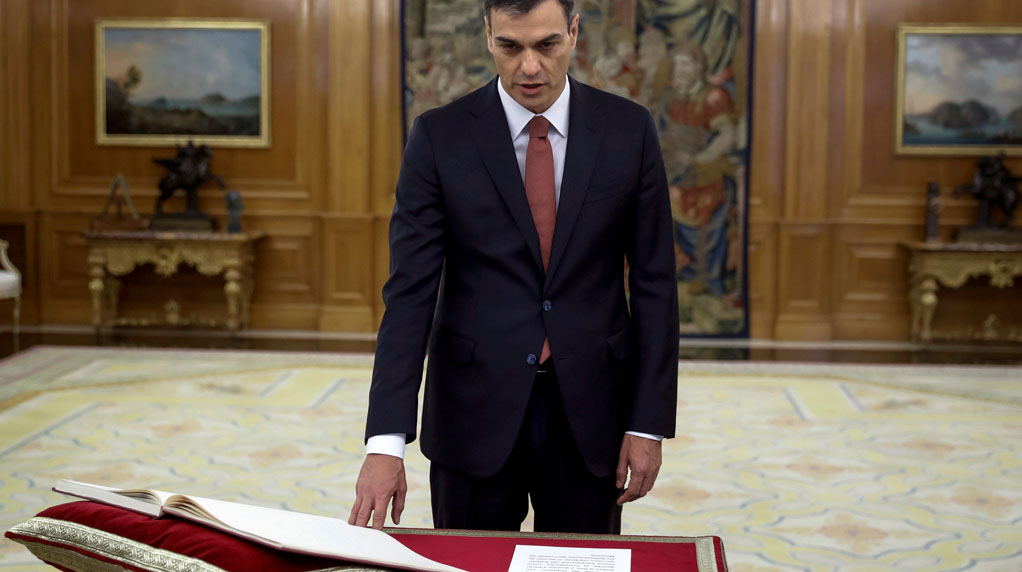 Madrid: Spain's new Prime Minister Pedro Sanchez, propelled to power by an unlikely alliance of rival parties, on Sunday worked on putting together a minority government which a close aide said would not include ministers from the hard-left Podemos party.
The Socialist party leader, a pro-European who is a newcomer to government, says he wants his government to last until mid-2020, when the parliamentary term ends.
Sanchez rose to power unexpectedly as a result of a corruption scandal that toppled conservative Mariano Rajoy.
But with only 84 out of 350 seats in parliament, it is unclear how long a Sanchez government can last.
Podemos, which helped Sanchez to oust Rajoy, said it wants to be in the government.
The anti-austerity party wants generous welfare policies and tougher regulations and taxes on banks.
A single-party Socialist government with 84 lawmakers would be "more unstable than one that includes other political forces," Pablo Echenique, a leading member of Podemos, told reporters.
Asked if there would be any Podemos ministers, Margarita Robles, a close aide and spokeswoman for Sanchez, told Cadena Cope radio: "No, no. Pedro Sanchez' position is clear. It will be a Socialist party government, a minority government."
Jose Luis Abalos, another close aide to Sanchez, told La Sexta TV that the cabinet would be unveiled by the middle of next week, and could include independent candidates who were not Socialist party members.
He stressed that the parties that ousted Rajoy all opposed early elections, although he acknowledged that there would be stiff opposition to the government and there could eventually be an early ballot.
Economic analysts said they did not expect a weak Sanchez government, who also relied on nationalist Catalan and Basque parties in his rise to power, to achieve major policy changes.
"The new government is going to be very weak," analysts from French investment bank Natixis said.
"It risks suffering permanently from the continuous pressure of regional and separatist parties ... the life expectancy of this government might be very short."
While the Catalonian crisis will be a major challenge for Sanchez, he can count on a positive economic cycle, with Spain enjoying one of the highest growth rates in the euro zone.
A senior Spanish banker said the country was not a big worry for international markets, taking into account quarterly growth rates of around 0.7 per cent.
But as local media sized up the chances of Sanchez' government lasting until 2020, even the centre-left El Pais newspaper doubted that would be the case.
"No government without the backing of the ballot box has the legitimacy needed to carry out the regeneration, economic modernisation and political changes needed by Spain. The government that Pedro Sanchez will put together can only be short and transitional," it said in an editorial on Sunday.