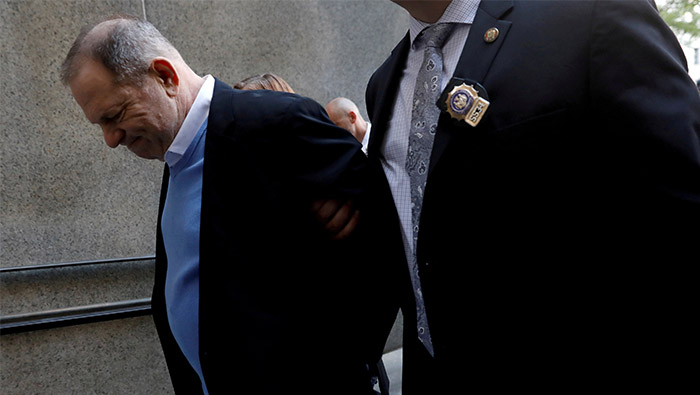 New York: Movie producer Harvey Weinstein was indicted on Wednesday on charges of rape and a criminal sexual act, Manhattan District Attorney Cyrus Vance said, the first case to emerge from a slew of sexual misconduct allegations against him.
"This indictment brings the defendant another step closer to accountability for the crimes of violence with which he is now charged," Vance said in a statement on the charges against the disgraced 66-year-old co-founder of the Miramax film studio and the Weinstein Co.
The grand jury indictment follows his arrest and court appearance last Friday on charges related to two among about 70 women who have accused him of sexual misconduct, all of which Weinstein has denied.
Vance's statement said Weinstein was charged with rape in the first and third degrees and a criminal sexual act in the first degree.
Ben Brafman, the head of Weinstein's legal team, said his client would plead not guilty and defend himself against the charges.
If convicted on the most serious charges, Weinstein could face between five and 25 years in prison.
Earlier on Wednesday, Weinstein declined to testify before the grand jury after a judge denied a request by his lawyers to postpone the appearance. Brafman had argued Weinstein was denied access to information about the case and lacked preparation time.
"Mr. Weinstein intends to enter a plea of not guilty and vigorously defend against these unsupported allegations that he strongly denies," Brafman said in a statement after the indictment.
"We will soon formally move to dismiss the indictment and if this case actually proceeds to trial, we expect Mr. Weinstein to be acquitted."
The grand jury indictment spares the prosecution the step of having to go before a judge to demonstrate there is enough evidence to bring Weinstein to trial.
The indictment follows a months-long investigation with the New York Police Department. Police have not identified the two women, but said the crimes took place in 2004 and 2013.
Weinstein remains out on $1 million cash bail ordered by a judge last Friday. Weinstein surrendered his U.S. passport and agreed to wear a monitoring device that tracks his location, confining him to the states of New York and Connecticut.
Some of the allegations date back decades. Weinstein has denied ever having nonconsensual sex.
The accusations, first reported last year by the New York Times and the New Yorker, gave rise to the #MeToo movement, in which hundreds of women have publicly accused powerful men in business, government and entertainment of sexual misconduct.
Actresses who have publicly accused Weinstein of sexual misconduct include Uma Thurman, Ashley Judd, Rose McGowan and Salma Hayek.