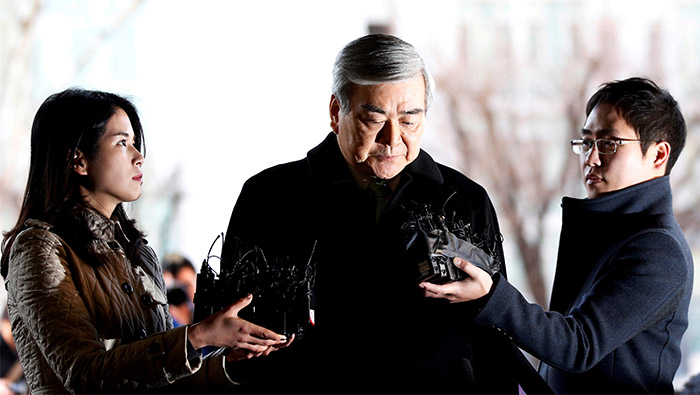 Seoul: South Korean prosecutors raided the headquarters of Korean Air Lines Co Ltd on Thursday over suspected embezzlement, tax evasion and breach of trust by members of its founding family, a prosecution official told Reuters.
The investigation is the latest involving the flag carrier's controlling family, which came under increased scrutiny in April after the chairman's daughter, Cho Hyun-min, allegedly threw water at an attendee of a business meeting.
Cho Hyun-min is the younger sister of Heather Cho. The elder Cho was jailed in 2014 for demanding a Korean Air Lines plane return to its gate at a New York airport, after losing her temper over the way she was served nuts in a first class cabin.
The younger sister's tantrum re-ignited public resentment toward the perceived unchecked behaviour of conglomerates' powerful family-owners, with the latest incident spawning probes by various agencies into the Cho family.
A lawyer for the younger daughter, Cho Hyun-min, could not be reached for comment.
The Seoul Southern District Prosecutors' Office is also tracking suspicious money flows within accounts of Cho family members and associates, the prosecution official said.
The prosecutor's office began investigating suspected tax evasion after the tax agency questioned whether Chairman Cho paid tax on overseas assets inherited from his father, Yonhap News Agency reported earlier on Thursday.
A Korean Air Lines spokesman told Reuters an investigative team was at the headquarters but declined further comment.
Chairman Cho earlier this month stepped down from the post of co-chief executive at Jin Air Co Ltd, shortly after authorities considered cancelling the budget affiliate's licence because Cho's younger daughter had been a board member despite being a U.S. national, a potential contravention.
Separately, South Korean police on Thursday sought an arrest warrant for Chairman Cho's wife, Lee Myung-hee, for charges including assault, Seoul Metropolitan Police Agency said.
The police has secured testimony from 11 people claiming to have been assaulted or verbally abused by Lee, a police agency official told Reuters.
Shares in Korean Air Lines fell as much as 1.1 per cent in Thursday trade, compared with a 0.6 per cent rise in the wider market. Shares in Jin Air fell as much as 2.1 percent.
"Due to the uncertainty concerning the founding family, Korean Air shares are undervalued," said analyst Choi Chi-hyun at Meritz Securities. "Once the governance risk passes, the attractive valuation will come to the fore."