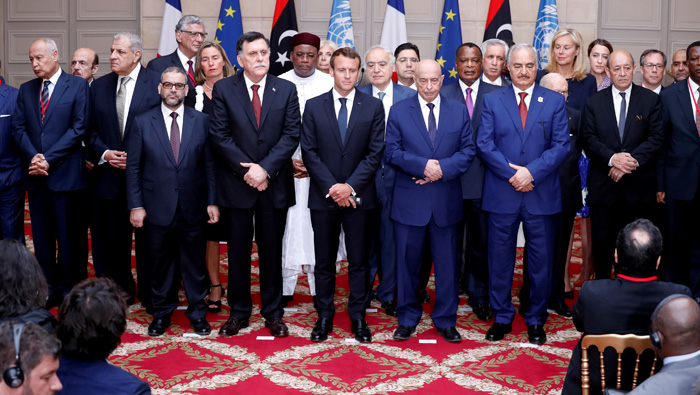 Tunis: A commitment by key Libyan actors to hold elections in December faces multiple obstacles, including the lack of a legal framework for polls and escalating conflict in parts of the country.
French President Emmanuel Macron called the agreement reached in Paris on Tuesday a historic step towards reunifying and stabilising Libya, which has been in turmoil since a NATO-backed revolt toppled Muammar Gaddafi in 2011.
Tripoli Prime Minister Fayez Al Seraj, eastern commander Khalifa Haftar and the leaders of two rival parliamentary assemblies endorsed - but did not sign - an eight-point statement that set the date for parliamentary and presidential elections on December 10, with a commitment to establish the constitutional and legal basis by September 16.
But the question of how such a basis will be set - whether by a vote on a constitutional draft, a new election law, or an adaptation of Libya's post-uprising constitutional declaration - was left open.
The issue is central because opponents of Haftar, the dominant figure in eastern Libya and a possible candidate for president, want to ensure that presidential and civilian powers over the military are clearly defined before polls are held.
Haftar's rivals suspect that, given the chance, he would return the country to authoritarian rule. They also blame him for destroying parts of Benghazi and displacing large numbers of residents in a three-year campaign for control of Libya's second-largest city.
Haftar says he is ridding Libya of extremists and is committed to the electoral process. As the meeting in Paris took place, Haftar's Libyan National Army (LNA) pressed on with a campaign against extremists and other opponents in the eastern city of Derna, where the United Nations says fighting is having a "devastating" impact.
Conflict has also flared in recent weeks in the southern city of Sabha, on the dividing line between two loose alliances that have supported rival political camps in Tripoli and the east since disputed elections in 2014.
There was no mention of the fighting in the Paris statement, though Seraj told reporters he had "appealed for an end to combat in all of Libya - enough blood has been spilt".
Analysts say the conflict and the several hundred thousand people displaced by it could skew the outcome of an election. Some Libyans have said the country is too divided to cope with a national vote.
Security is another challenge. Suicide attackers targeted the offices of the electoral commission in Tripoli in May, killing at least 12 people. Libya has no national security forces to oversee polls, or effective national institutions that can settle legal challenges.
There is no consensus over how to unify the security forces and other divided bodies including the central bank - a further goal set out in the Paris statement.
Suspicion is visible on both sides. Some west Libyan armed groups, including from the key military power base of Misrata, see France as too close to their rival Haftar and stated their opposition to the Paris talks before they began.
A senior LNA source stressed that Haftar had not put his signature to any deal. "Sitting does not mean agreeing, and no agreement was signed at the Paris meeting," he said.
More than 40 eastern members of parliament issued a statement supporting pledges referenced in the Paris declaration to move parliament to Benghazi and to encourage a military unification dialogue in Cairo, a process seen to favour the LNA.
"It's very easy to get Libyans to agree to agree to something but when it comes down to hashing out the details that's when the squabbles tend to start," said Tarek Megirisi, a visiting fellow at the European Council on Foreign Relations.