Cyclone Mekunu: One step at a time as Dhofar unites to rebuild 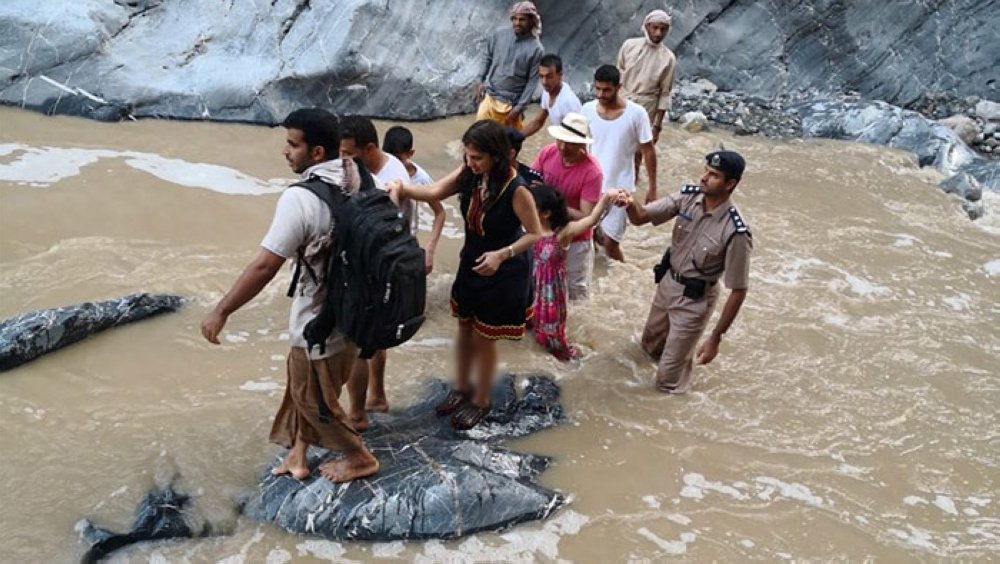 Muscat: A police officer guides a child across a river as he helps rescue a party of expat tourists in the wake of Cyclone Mekunu. Knee-deep in water, the Royal Oman Police officer is only concerned with the safety of the visitors.
Across Dhofar, emergency services crews and civilians have united to keep people safe. A team of civilians and officials from the ROP, Public Authority for Civil Defence and Ambulance helped rescue a group of foreign tourists stuck in Wadi Bani Auf in the Wilayat of Al Rustaq.
In a statement online the ROP said, “Tourists of British nationality were rescued from Wadi Bani Auf on Tuesday evening. This was done in co-operation with the Public Authority for Civil Defence and Ambulance and the people of Wadi Bani Auf.”
**media[881456]**
When Abdullah Al Rawas waded through the raging waters left behind by Cyclone Mekunu to save those trapped in their cars, he wasn’t doing it for personal glory.
He was doing it simply because it was the right thing to do.
Rescuing people
In the aftermath of Mekunu and the damage it caused along the Dhofari coast, Al Rawas led a group of four volunteers, who set out with the intention of rescuing people stranded as a result of the cyclone.
His fellow Omanis along with him would end up rescuing a total of 18 people during and after Mekunu, and towing 15 vehicles to safety in the towns of Raysut and Sahnoot.
“This is our national duty,” said Al Rawas, speaking exclusively to the Times of Oman. “To be honest, it was very risky as the situation was very dangerous. We even asked the authorities to close some roads, as many motorists risked their lives and ventured into flooded wadis and roads.”
Despite Al Rawas and his friends being hungry and thirsty, as a result of their fast during the Holy Month of Ramadan, they selflessly made their way across dangerous roads and through treacherous waters to help those who needed their aid.
“We risked our lives to save these people. We spent hours, all the way from the afternoon until dawn the next morning,” he admitted. “We sometimes missed our suhoor just to rescue these people,” he said.
Al Rawas and his friends used five 4x4 vehicles, that were fully equipped and well-stocked with tools to rescue and tow vehicles that were found in the wadis and swamps. All of those who were rescued were Omanis. “Many people broke their fast inside their vehicles,” he explained.
Flooded wadis
“Some of the motorists who entered flooded wadis put our lives and rescue teams in trouble. I saw death before my eyes some days ago when we went to rescue a vehicle that was stuck, and we saw the sea waves coming towards us. Thank God we are still alive. If our cars could speak, we would thank them for saving us.”
Al Rawas and his friends convinced some of the drivers to leave their stranded vehicles until the late hours of the morning.
Cyclone Mekunu hit Oman on Friday, after weeks of build-up in the Indian Ocean, although its effects could be felt from Thursday onwards. Mekunu reached its zenith at around 11pm on Friday, characterised by wind gusts at speeds of 180kph, torrential rains, thunderstorms and eight-feet-high waves.
Timely preparation from Oman’s National Committee for Civil Defence, which began its emergency plan two weeks ago, meant just six people lost their lives during the category one cyclone. However, roads have been damaged, some homes have been flooded, and trees and communication poles have been toppled by the cyclone.
To deal with the restoration of the affected areas of the Dhofar Governorate, 6,000 volunteers – with the same zeal that Al Rawas and his friends showed – are already on the way to Salalah, while donations have been pouring in since Mekunu began to die down on Saturday.
More than 15 private businesses from Northern Batinah, Muscat, Al Wusta and Dhofar have donated to the Mekunu relief fund, via various Oman Chamber of Commerce and Industry (OCCI) branches. “We have received a lot of aid from many businesses in the private sector. Since food was not scarce in Dhofar, we have been encouraging donations such as equipment that can help in the clearing up of roads,” said Ahmed Al Hooti, board member of OCCI.