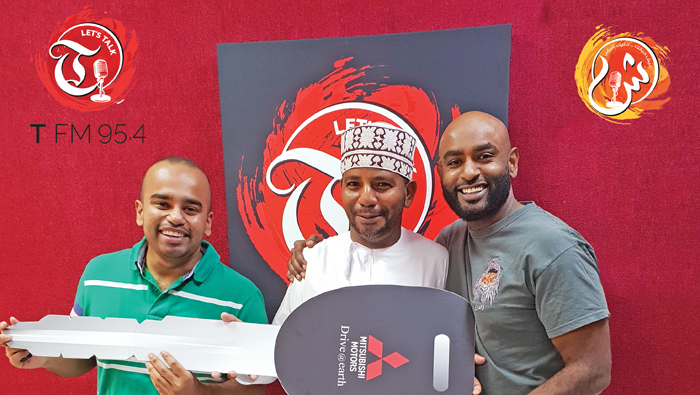 Muscat: The winner of the Times of Oman’s radio station, TFM 95.4, has only one person to thank after winning the station’s first Mitsubishi Pajero as part of their Spread More Smiles Ramadan campaign.
Ibrahim Salim Hamood Walad Dhawi thanked god after winning the brand new four-wheel drive, which was awarded to him at the TFM radio studios in Al Khuwair on Thursday evening. Three more cars are to be announced with daily cash prizes on T FM 95.4. “I never expected to win such a big prize,” said Ibrahim, speaking to Times of Oman. “I’m grateful to the Almighty and I thank the T FM team for this.”
The studio was filled with eagerly awaiting RJs and at the strike of 9pm, that one fate changing call was finally made. At first, Ibrahim thought it was a prank call, but after realising that the call was genuine and the T FM team was on the other end of the call, and that he had actually won the car, his excitement knew no bounds. He was on top of the world. “Inching close to successfully completing week one with giving away daily cash prizes, we were all super excited at the Studio to finally announce our very first winner of the car! This campaign means a lot to us, more so because through making others win, we are helping those in need in Oman,” Garima Bhandari, T FM radio station manager, said.
“Making others happy by doing our little bit is what we at T FM 95.4 strive for,” she added.
“We are going to continue with the campaign till the end of the holy month and hope that we are able to raise enough money
to donate.
T FM 95.4 launched the campaign supported by Mitsubishi Pajero and Omantel giving a chance to its listeners to win a daily cash prize of OMR100 and a Mitsubishi Pajero every week.
The paramount of the initiative is to raise a substantial amount of money through the SMSs sent and contribute a part of the money towards Dar Al Atta’a at the end of the Ramadan.
To win, SMS ‘TFM’ to 90018.
The team at T FM 95.4 is committed towards helping the underprivileged in the Sultanate by running this initiative, to Spread More Smiles across the Nation.