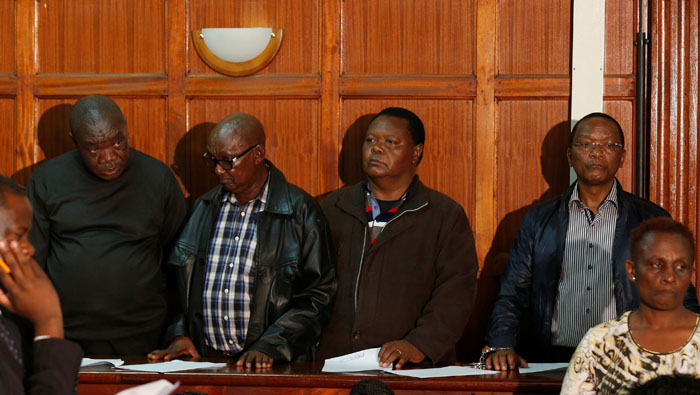 Nairobi: Kenyan authorities brought 24 civil servants and business people to court in handcuffs on Tuesday to hear charges against them amid an investigation into the theft of nearly $100 million of public funds.
The suspects who included the public service ministry's principal secretary pleaded not guilty to magistrate Douglas Ogoti of charges that relate to stealing at the government's National Youth Service (NYS).
It is rare for prosecutors to bring such a large group of public officials to court to answer corruption charges. President Uhuru Kenyatta pledged to stamp out graft when he was first elected in 2013 but critics say he has been slow to pursue top officials and ministers.
The chief prosecutor Noordin Mohamed Haji on Monday named 54 people, 40 of them government officials, as due to face charges on counts including abuse of office and conspiracy to commit an economic crime. Some of those charged remained at large.
The NYS is the state agency that trains young people and deploys them to projects ranging from construction to traffic control.
Haji said on Monday the investigation by his office and the police revealed that funds were stolen through fictitious invoices for goods such as firewood and stationery and multiple payments on one supplier invoice.
"Investigations reveal that there was no procurement whatsoever," he said, adding that the next stage of the investigation would target the alleged role of banks in facilitating illicit cash transfers.
Kenyan media have reported on more than a dozen corruption scandals involving state agencies and officials since Kenyatta took power but there have been no convictions of high profile figures, according to a Reuters tally. The scandal follows one three years ago at the same agency.
Earlier this year, a court acquitted nearly two dozen NYS officials after a trial over the alleged theft of 48 million Kenyan shillings ($470,000) in 2015.
On Tuesday, local human rights organisations said a woman who has been using social media to organise a demonstration on Thursday against corruption is missing.
The National Coalition of Human Rights Defenders said the woman had sent a text message on Tuesday morning to her lawyer saying that she had been detained by plainclothes men. Her phone was then switched off. The police spokesman did not respond to a request for comment.