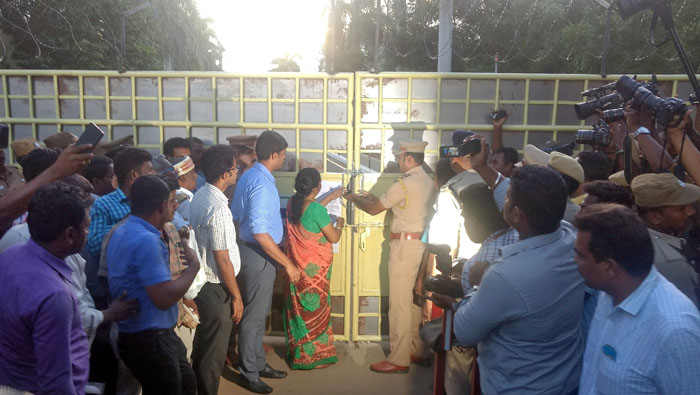 New Delhi: Vedanta Resources is working on a legal challenge to an Indian state's closure of one of its copper smelters, but it will not proceed until tensions over the deaths of 13 people during protests last week have eased, two sources told Reuters.
The southern state of Tamil Nadu ordered the permanent closure of the smelter on Monday after police fired on protesters demanding its closure on environmental grounds.
London-listed Vedanta, majority owned by billionaire Anil Agarwal, considers it is now left with no other option than to file a writ petition challenging the Tamil Nadu government's decision in the Madras High Court or the Supreme Court in New Delhi, the two sources close to the company said.
"They have not presented a single (piece of) evidence against the company," said one of the sources, both of whom declined to be named.
"Vedanta is confident that it has a strong case legally. It has not violated any law." However, the sources said that with local tensions running high over the deaths of the protesters, the resources company was holding off for now from filing the legal challenge.
A Vedanta spokesman did not respond to requests seeking comment. The company earlier said it had broken no rules, and hoped soon to reopen the plant and double its capacity to 800,000 tonnes a year at a cost of more than $700 million.
The chief of Vedanta's India copper business, P. Ramnath, told Reuters on Friday the company would legally fight any attempt to close the plant. D. Jayakumar, a senior Tamil Nadu minister, said the smelter was closed mainly in response to the demands of residents of the coastal city of Thoothukudi, and that the state government would defend itself in court.
"We've closed the plant based on various violations raised by the pollution control board. They will of course say that they have not violated any rule," Jayakumar, who speaks for the state government, told Reuters.
"People are totally against the plant. We're with the people only. We go by their demand and the law." He declined to give details of the violations.
D. Sekar, a senior official with the Tamil Nadu Pollution Control Board, also declined to explain the reasons, saying only that the closure was a "policy decision".
The plant, India's second-biggest copper smelter known as Sterlite Copper, has been shut since late March for maintenance and pending a renewal of its licence, as residents continued largely peaceful protests demanding it be shut for good.
Residents and environmental activists have long demanded a shutdown of the copper smelter, which has annual production of more than 400,000 tonnes, citing air and water pollution. Vedanta denies the accusations of pollution.
The opposition escalated last week when thousands of people marched towards a government office on the 100th day of the protest. Ten people were killed in police firing that day, while three more died in subsequent days, piling pressure on the state government as protests spread elsewhere in the state.
Minister Jayakumar said his government has been opposed to the smelter since 2013, when a suspected gas leak led to its closure for more than two months. The plant was allowed to reopen after a court-appointed team of experts found no instance of emissions beyond set limits.
In recent weeks, however, Tamil Nadu has cancelled a decision to allocate a plot of land to Vedanta for a doubling of the plant's capacity and cut its electricity connection and water supply, he said.