Force was not with "Solo: A Star Wars Story" at the box office 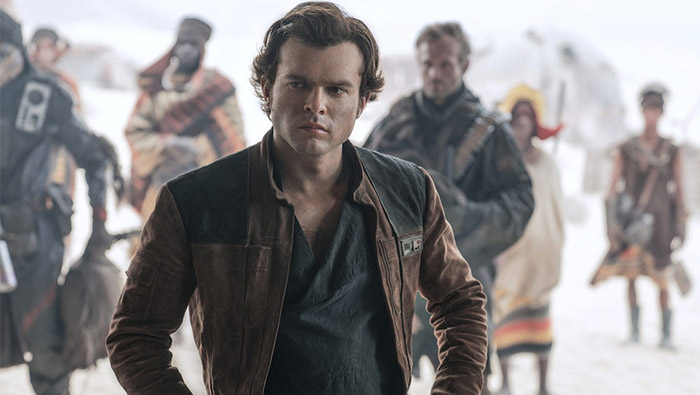 Los Angeles: "Solo: A Star Wars Story" struggled over the Memorial Day weekend, securing $103 million in 4,381 North American locations over the four-days, according to Monday estimates. It came in way under projections, opening with $84.7 million over three days, and just $148 million globally.
"Solo" represents the lowest opening for a "Star Wars" film since Disney took over the franchise starting with 2015's "The Force Awakens". As the first film in the sequel trilogy, "The Force Awakens" launched with a massive $248 million three-day total. A year later, "Rogue One" debuted with $155 million, while the most recent installment prior to "Solo" - "The Last Jedi" - bowed just five months ago in December 2017 with $220 million.
"Solo" did help land the best domestic Memorial Day weekend since 2014 when "X-Men: Days of Future Past" was the top film. However, it wasn't enough to land the highest Memorial Day opening. That title still belongs to "Pirates of the Caribbean: At World's End", which debuted with $139.8 million in 2007.
The second standalone "Star Wars" anthology film has received mixed reviews. It currently holds an A- CinemaScore, along with a 71 per cent rating on Rotten Tomatoes.
"Solo" was the only wide release this weekend, meaning the rest of the North American box office consists of a series of holdovers.
"Deadpool 2" slid to No. 2, where it made $55 million from 4,349 screens over four-days. That brings its domestic total up to $219 million.
In third is another heroic blockbuster, "Avengers: Infinity War". The Marvel and Disney title's scored $21.2 million in 3,768 locations. In five weeks, its domestic tally has topped $626 million, while globally it has made $1.9 billion.
"Book Club" landed in fourth during its sophomore outing. Paramount's latest comedy took in $9.5 million for the three days on 2,810 screens. Its domestic total now reads $34.2 million after earning $12.5 million for the four-day weekend.
That leaves Warner Bros' "Life of the Party" at No. 5, with $6.9 million from 2,937 locations for the four days. Its three-day total was $5 million, while its three-week domestic grosses lands at $40.9 million.
Also in the top 10 is the little documentary that could "RBG". The title centered on the life and career of Supreme Court Justice Ruth Bader Ginsburg made $1.5 million on just 415 screens over the four-day weekend. In four weeks, the Magnolia and Participant Media film has grossed an impressive $6 million.
"Solo" still boosts the domestic box office 23.1 per cent compared to Memorial Day weekend in 2017, according to comScore. Meanwhile, the year-to-date box office is up 7.6 per cent.