Donations pour in for cyclone-hit Dhofar and Al Wusta 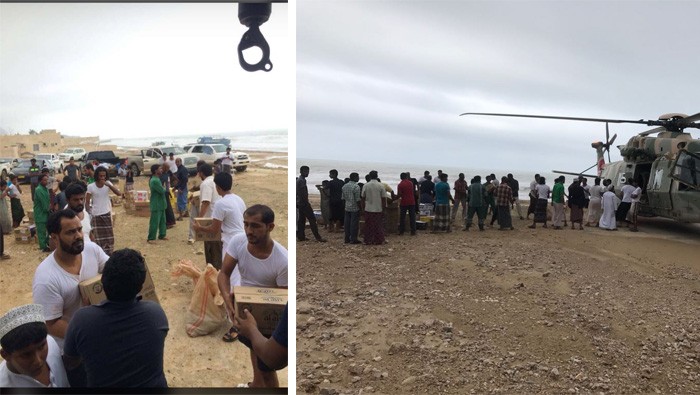 Muscat: The devastation caused by Cyclone Mekunu that hit Dhofar could be felt throughout the Sultanate. In response to this, numerous public and private businesses provided financial aid and equipment to help ease the lives of those affected.
Their contribution towards helping Dhofar could be attributed to the sense of social responsibility and national duty that many businesses felt; as a result, bodies such as Oman’s Chamber of Commerce in Muscat and Dhofar, the municipal council, and charities received tremendous aid from all the members of society.
Salalah Airport donated OMR100,000 to help the people in Dhofar affected by cyclone Mekunu. Oman Airports announced that the financial aid is in accordance with the commitment of Salalah Airport towards ensuring the safety of the people of Dhofar, following cyclone Mekunu.
In a statement online, Oman Airports said: “Through Salalah Airport, we are pleased to make a financial contribution of OMR100,000 as a part of our national duty and social responsibility.”
On the other hand, more than 15 private businesses from Northern Batinah, Muscat, Al Wusta and Dhofar have donated to the Mekunu relief fund, via various Oman Chamber of Commerce and Industry (OCCI) branches. “We have received a lot of aid from many businesses in the private sector. Since food was not scarce in Dhofar, we have been encouraging donations such as equipment that can help in the clearing up of roads,” said Ahmed Al Hooti, board member of OCCI.
On Saturday, Omantel announced that it will be allocating OMR100,000 to help families affected by Mekunu in Dhofar and Wusta.
There have been companies that opted to donate hardware rather than funds, and provided buses to transport people, equipment to clear the residue from the cyclone, and trucks filled with bread.
“We are waiting for authorities such as the Royal Oman Police to tell us what equipment they need so that we can support them in any way we can,” Al Hooti added.
“Iftar and Suhoor meals for families in shelters were provided by Bank Dhofar in cooperation with the Oman Charity Organisation,” according to OCCI. In addition, military forces and locals also provided food.