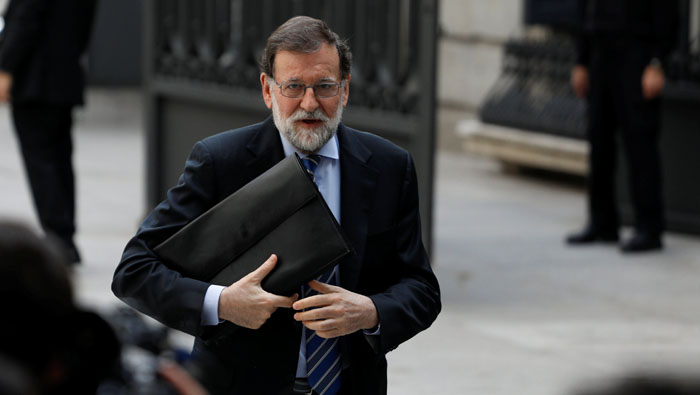 Madrid: Spanish Prime Minister Mariano Rajoy will face a vote of confidence in his leadership on Friday as corruption convictions handed down to dozens of people linked to his centre-right People's Party (PP) threatened his six-year rule.
Spain's parliament agreed on Monday that the debate and vote would take place on Thursday and Friday, although the opposition Socialists who proposed the vote may struggle to garner enough support in the fragmented legislature to unseat Rajoy.
News of the no-confidence vote helped drive the Spanish government's borrowing costs to 2-1/2 month highs, while the blue-chip stock index, the IBEX, turned lower.
Opposition parties are taking advantage of Rajoy's weakness after 29 people linked to the PP were convicted last Thursday of crimes including influence-peddling and falsifying accounts, in the culmination of a long-running corruption trial.
The PP has closed ranks behind Rajoy, who said on Friday he intended to serve out his four-year term and that the corruption convictions did not affect a single member of his government. The 63-year-old survived a no-confidence vote last June.
"We are deeply sorry that there were people who used the PP for self-enrichment," party spokesman Pablo Casado told a news conference on Monday, adding that the no-confidence vote was irresponsible and put Spain's economic stability at risk.
Spanish borrowing costs relative to Germany's rocketed to their widest differential since the start of the year, though they were also hit by concerns over political uncertainty in Italy.
Ciudadanos (Citizens), a liberal party ahead in opinion surveys and the most likely to win a snap election, urged Rajoy on Monday to call an early poll, saying his government was weak and tainted by corruption. The Socialists have proposed their leader Pedro Sanchez as a replacement for Rajoy.
The party, with just 84 seats in parliament, must get at least 176 votes to carry its proposal. Leftist party Podemos, with 67 seats, has said it will support the motion, but that would not be sufficient.
The Socialists would also have to seek backing from small regional parties who would attach politically difficult conditions in return for their support such as the freedom of Catalan politicians from custody.
Ciudadanos said on Saturday it would be willing to work with the Socialists to support a neutral candidate to oust Rajoy, whose minority government has been damaged by a crisis sparked by Catalonia's independence vote.
However, Ciudadanos leader Albert Rivera said on Monday he was not prepared to seek pacts with "regional nationalists and populists" to oust Rajoy and that elections in the autumn would be preferable.