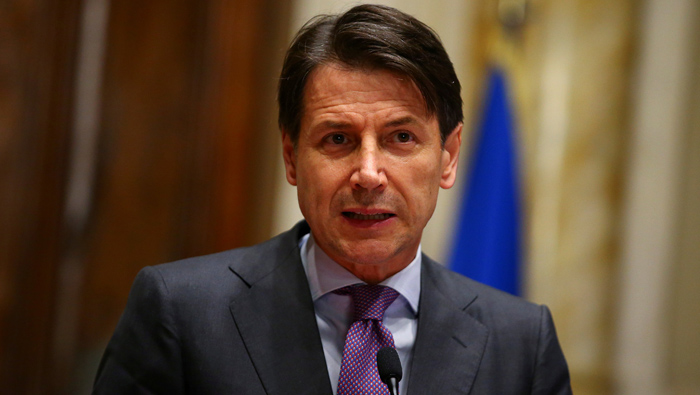 Rome: Italy's prime minister-designate's efforts to put together a cabinet remained stymied on Saturday as his political backers pushed for a eurosceptic economy minister who the president has so far refused to accept.
The possible appointment of the 81-year-old economist Paolo Savona has rattled financial markets. In a further blow to the nascent government, Moody's on Friday threatened to downgrade the country's sovereign debt rating.
President Sergio Mattarella on Wednesday gave Giuseppe Conte, a law professor and political novice, a mandate to form a coalition government with the backing of the anti-establishment 5-Star Movement and the far right League, two rivals, more than 80 days after an inconclusive election.
Conte met the president on Friday without resolving the deadlock over Savona, who has questioned Italy's membership of the euro and attacked Germany for trying to dominate Europe economically.
After the meeting, League leader Matteo Salvini said he was "truly angry" in an apparent reference to the president's veto of Savona. On Saturday, Salvini did not back down, saying the League had already taken enough "steps backward".
He would give Conte a list of the party's possible ministers later in the day. Asked if he was concerned about a split with the president's office, he said: "The only risk I see is that the people are further distanced from the palaces of power."
Though Savona's possible nomination has worried financial markets, he has distinguished academic and professional credentials with high-level experience at the Bank of Italy, in government as industry minister in 1993-94, and with employers' lobby Confindustria.
"To veto the economy minister, despite Savona's excellent resume, I find as a citizen to be absolutely unacceptable," Alessandro Di Battista, a top 5-Star politician, said on Facebook.
Mattarella has not spoken publicly about Savona, but through his aides he has made it clear he does not want an anti-euro economy minister and that he would not accept the "diktat" of the parties.
Conte, whose choices for his cabinet must be approved by Mattarella, appeared to be unable to negotiate an alternative as his backers, the League and 5-Star, held the line. "We're working," Conte said when asked about his progress as he entered the lower house of parliament on Saturday.
If Conte were to fail to come up with a cabinet that gets the blessing of both the coalition and the president, it could force another election later this year.
Meanwhile, the prospect of Italy's government going on a spending spree with promised tax cuts and welfare increases by hiking up its already massive debt, worth 1.3 times annual output, roiled markets last week.
On Friday, the closely watched gap between the Italian and German 10-year bond yields, seen as a measure of political risk for the euro zone, was at its widest in four years at 215 basis points.
The chance that the new government will weaken public finances and roll back a 2011 pension reform prompted Moody's to say after markets had closed on Friday that it may downgrade the country's sovereign debt rating.
Moody's has a 'Baa2' long-term rating with a negative outlook on Italy. A downgrade to 'Baa3' would take the country's debt to just one notch above junk. Italy will test investor demand for its debt next week, offering bonds at auction.
Despite the recent surge, Italian yields are well below the peaks they reached during the euro zone crisis of 2011-2012, thanks mainly to the shield provided by the European Central Bank's bond buying programme.
At the height of that crisis the spread between Italian and German 10-year bonds stood above 550 basis points.