Mekunu: We salute the heroes who ran towards the storm 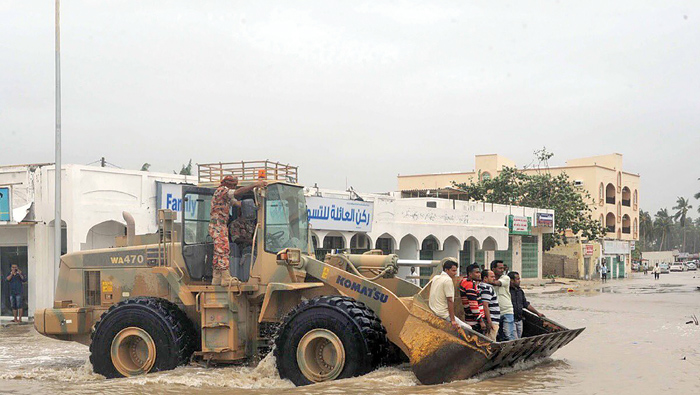 Follow this live blog for Times of Oman's comprehensive coverage of Cyclone Mekunu
Muscat: When faced with danger, it is only natural for some of us to take shelter in our homes, wait out the storm and, once it has passed, go about our normal lives once again. There are those, though, whose job it is to stand in the face of danger, and provide the security and safety that we take for granted.
Read here: Death toll from cyclone Mekunu in Oman rises
While Oman’s National Committee for Civil Defence had instructed all inhabitants of the Dhofar Governorate and surrounding areas to stock up on supplies, go home and hunker down, so to minimise Cyclone Mekunu’s damage, it had also set in motion a plan to ensure safety. Thousands of emergency servicemen and first responders – the unsung heroes of efforts to weather Cyclone Mekunu – stood fearlessly in the face of torrential rain, deafening thunderstorms and eight-foot-high waves that crashed onto the Dhofari coast.
**media[879353]**
These brave men and women were risking their lives so that we wouldn’t have to.
Video: Roads flooded in Salalah after Cyclone Mekunu strikes
Whether they were uniformed officers from the Royal Oman Police, who had erected barricades outside areas that could pose a danger, selflessly standing next to potential landslides, rescue teams from the Public Authority for Civil Defence and Ambulance, who selflessly and ceaselessly rushed to the aid of those who needed it the most, or doctors and paramedics who stayed up through the night to treat the wounded, all of Oman’s emergency and security services pooled their resources for the collective good so that the best resource this nation has – its people – could be looked after during troubled times.
In pictures: Relief and rescue efforts in the wake of Cyclone Mekunu
Not that there were many casualties to report: government figures show that three people unfortunately lost their lives. A 12-year-old girl fell from a parapet in the build-up to Mekunu, while a man died when he was stranded in his vehicle during the cyclone. The third, an Asian expat, was discovered after he drowned in Raysut.
The government had drawn up a series of emergency plans to ensure that Oman stood firm in the face of Mekunu, which at its peak, sent wind gusts of up to 180kph capable of inflicting great harm on the unprepared.
Oman was prepared however. Preparations had begun days ago, as shelters were set up, and a continuous stream of manpower, materials and vehicles were sent southward. While fire engines, ambulances and search and rescue vehicles drove the length of Oman to bolster the services in Salalah, choppers from the Royal Air Force of Oman made their way to the Hallaniyat Islands, the first in a series of evacuations that would take place along the Dhofari coastline.
Oman’s government ensured that everyone was taken care of: at hospitals in Salalah, patients were being moved on to medevac helicopters that would ferry them to Muscat, so they could continue to receive care.
Further inland, back-up power generators were sent to rural areas, as workers in desalination centres and power plants took measures to ensure that the critical facilities they tended to would continue to provide vital electricity and water supplies to those who needed it the most.
In the interest of public safety, any roads that would be impacted by the cyclone were closed, while Mwasalat, the Sultanate’s national transport service, temporarily ceased operations on Thursday afternoon. Salalah’s international airport was shut, but is to be reopened at midnight on Sunday, May 27.
As midnight struck on Friday, the cyclone reached its zenith. The rain lashed down on Dhofar, the wind furiously howled through the streets, and people waited with their loved ones indoors, fervently hoping that the storm would pass. There was precious little sleep that night.
In the end, Oman was forewarned, and forearmed to deal with the devastating effects that Mekunu could potentially have had.
Thanks to the efforts of Directorate General of Meteorology at the Public Authority for Civil Aviation, emergency services across Dhofar, as well as planners in Muscat and Duqm, where impacts of Mekunu were felt to a lesser extent, could track the progress the cyclone was making, thereby knowing where and when the most urgent attention was needed.
Senior officers and control centre operators were up all night, coordinating with their comrades in Dhofar to streamline rescue efforts, and have kept the public aware of the state of Mekunu through dedicated online updates and social media broadcasts.
PACDA, meanwhile, continued to execute search operations, rescuing a total of 190 people. It was the collective efforts of people in Dhofar and the rest of the Sultanate that made sure Oman’s unity during the storm kept it strong, and as Mekunu continues to slacken, rebuilding efforts have already begun.
His Majesty Sultan Qaboos bin Said has issued a Royal Decree stating that all private and public organisations will receive three days off to recover from the cyclone.
Mwasalat has issued 10 buses for 500 volunteers from the National Youth Commission who will be sent to Salalah forthwith, and that’s just the tip of the iceberg. As Salalah recovers from Mekunu, Oman’s brave servicemen are still out there, ensuring that all of us are safe and secure.