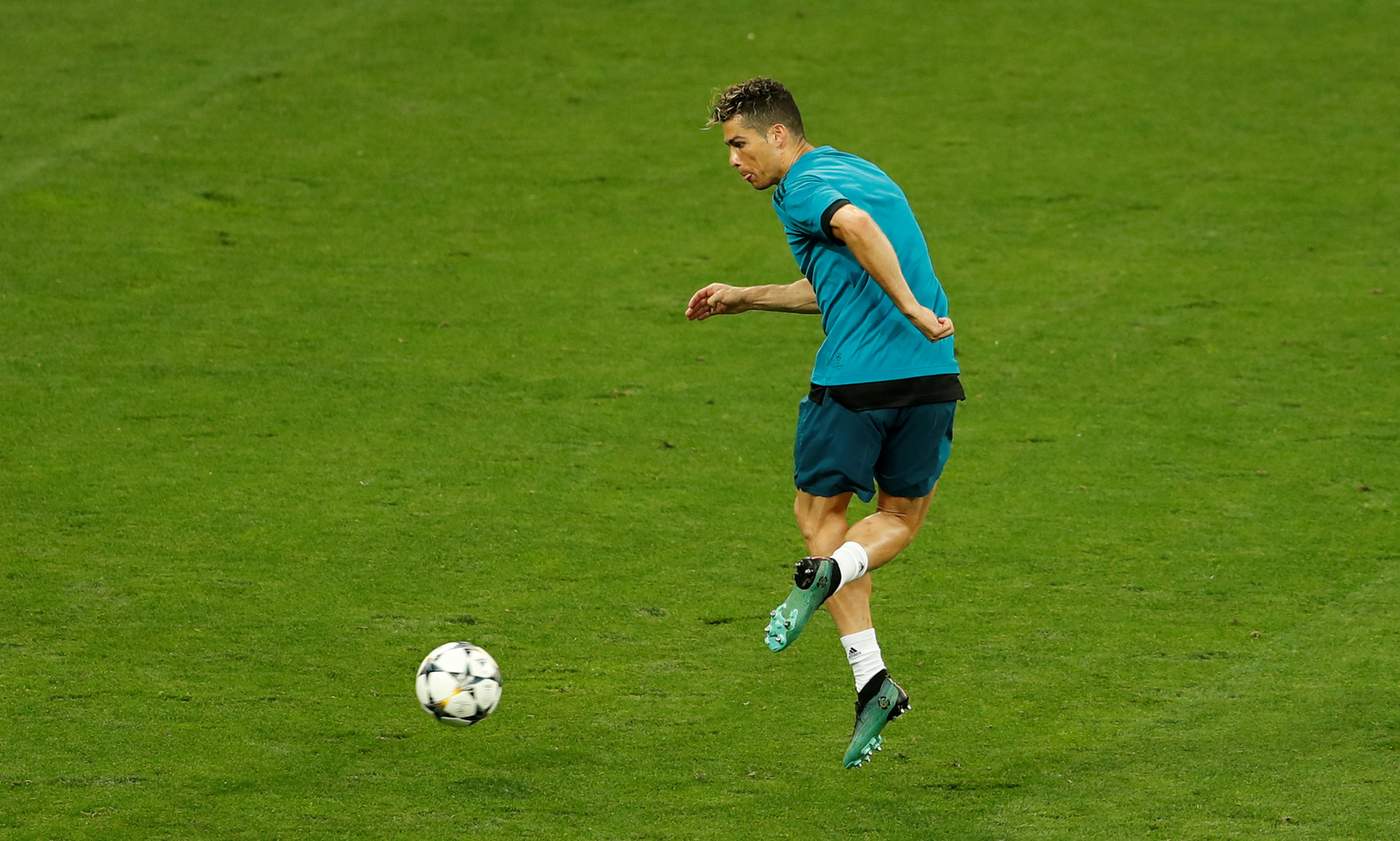 Kiev: Cristiano Ronaldo responded to his worst run of domestic form at Real Madrid with a record-smashing scoring streak in the Champions League and in Saturday's final he can join the club's iconic forward Alfredo di Stefano on five European Cup triumphs.
Ronaldo, 33, leads the competition's scoring charts for a remarkable fifth year in a row and a goal against Liverpool in Kiev will see him surpass Di Stefano and become the only player to score in four European Cup finals.
Slowed down by a five-game suspension for pushing a referee in the Spanish Super Cup against Barcelona back in August, Ronaldo endured a barren spell of only four goals in the first half of the Liga season as Madrid fell way behind runaway leaders and eventual champions Barca.
Ronaldo continued to reign supreme in Europe's top club competition, however, and goes into Saturday's final with 15 goals in 12 games this season.
He became the first player ever to score in all six matches in a Champions League group stage in December and with further strikes against Paris St Germain and Juventus in the knockout rounds he set yet another record in the competition by scoring in 10 consecutive games in the same season.
He recovered his domestic form, too, finishing the Liga campaign with 26 goals, only trailing Lionel Messi who finished top scorer with 34.
Ronaldo's outrageous bicycle kick against Juventus in Turin was widely hailed as the greatest goal in the competition's history.
He also showed nerves of steel to strike the decisive injury-time penalty in the second leg at the Santiago Bernabeu to pull Madrid through to the semis 4-3 on aggregate.
"I've had an amazing season in the Champions League," said Ronaldo, who has scored a record 120 goals in the competition overall.
"You need to be up for it and in this club you can never let up, let alone in this competition, with the history this club has in it. On a personal level it motivates me a lot."
Ronaldo struck for Manchester United against Chelsea in the 2008 Champions League final and hit the last goal from the penalty spot in Real's 4-1 win in extra-time over Atletico Madrid in the 2014 final.
'Making history'
He could not score against Atletico in the 2016 final although he buried the final penalty in their shoot-out win, while he netted twice in last year's 4-1 win over Juventus in Cardiff.
"I want to be fine on Saturday, play well, to score if I can, but the important thing is to win - it doesn't matter who scores, what matters is making history," Ronaldo added.
Ronaldo is bidding to join a group of players who have won the European Cup five times, including former Real great Di Stefano. Former Real winger Paco Gento holds the record with six European Cup winners medals.
Ronaldo's preparations for the Kiev final hit a snag when he sprained his ankle while scoring against Barca on May 6, although he played and netted in their final Liga game of the season against Villarreal last Saturday.
"I can see that he is feeling very good, he'll be at 150 percent although if he is 149 percent that's ok," Real coach Zinedine Zidane said of his talisman on Friday.
"He lives to play games like this."

Can Real handle liverpool out wide?
liverpool’s attacking threat hinges largely on their ability to attack in pairs down the flanks with speed and directness that several teams have found impossible to handle this season.
In the knockout phase of this year’s Champions League, liverpool have put five goals past both Porto and AS Roma in single legs while their three goals in 19 first-half minutes in the quarter-final, first leg against Manchester City effectively decided that tie.
On the left, Andy Robertson powers forward from fullback to give support to the lightning quick Sadio Mane, meaning it could be a busy night for Real right back Dani Carvajal.
On the liverpool right, Trent Alexander-Arnold can quickly provide a double-threat with the prolific Mohamed Salah.
What makes that pairing particularly dangerous to the Spanish side is that Real’s left back, Brazilian Marcelo, is brilliant going forward but often absent from defensive duties.
While Juergen Klopp will hope his team’s ability down the wings will create scoring opportunities, it could also have the valuable side-effect of restricting the forward forays of Carvajal and Marcelo, who are so important for Zinedine Zidane’s formation in providing width to Real’s attacks.
The reverse also applies of course -- if Real’s wide-men can be effective that could pin back Alexander-Arnold and Robertson and leave Salah and Mane more isolated.
So often games are decided in midfield - this one could well be decided on the wings.

Is liverpool’s defence capable of neutralising Ronaldo?
Much has been written and spoken about the improvement in liverpool’s previously frail central defence since the arrival in January of Dutchman Virgil van Dijk, who has formed an impressively solid pairing with Croatian Dejan Lovren.
There is no doubt that the days of hesitation and confusion at the heart of Klopp’s back four have gone but will Van Dijk and Lovren be able to keep out the well-established and highly effective strike pairing of Karim Benzema and Cristiano Ronaldo?
The pair make up for a lack of devastating pace with a great understanding and a very effective use of space.
There has been some talk in the Spanish media of Zidane opting for Gareth Bale ahead of Benzema, but while the Welshman would ask different questions of the liverpool defence, there are few strike pairings in world football that have as good an understanding with each other as the Portuguese and Frenchman.
This final will be a supreme test of liverpool’s new-found defensive strength.

Will Kroos and Modric be able to control midfield?
While liverpool may feel they have the edge out wide, Real will be hoping that their evident superior quality in central midfield will prove to be decisive.
liverpool’s James Milner and Jordan Henderson have won plaudits for their hard-working displays but Real possess two world class creative midfielders in Toni Kroos and Luka Modric, who are capable of dominating possession and providing ammunition for the Spanish side's attack.
If Zidane’s team can find a way to slow the game down and concentrate the game in the centre of the field they will have gone a long way to nullifying liverpool’s strengths.

How will Real’s defence cope with liverpool's pressing
Real’s backline may not be as shaky as some suggest but they are not used to playing against the kind of aggressive pressing that Klopp’s team deliver.
It will be fascinating to see how they cope. A key element in handling liverpool’s relentless harassment of defenders on the ball is having a good escape route. Holding midfielder Casemiro will have to provide that out-ball and his effectiveness in that duty will be crucial.

He who laughs last, laughs loudest
The final 10 minutes are likely to be even more decisive than usual in this final.
Real have a habit of playing modestly and then winning with a late goal - as in their last-gasp win over Juventus in the last eight. liverpool are sometimes vulnerable late in games after dominating earlier, as they showed in conceding two late goals against AS Roma in the semi-final, second leg.
Don’t think this match is over until referee Milorad Mazic blows the final whistle.