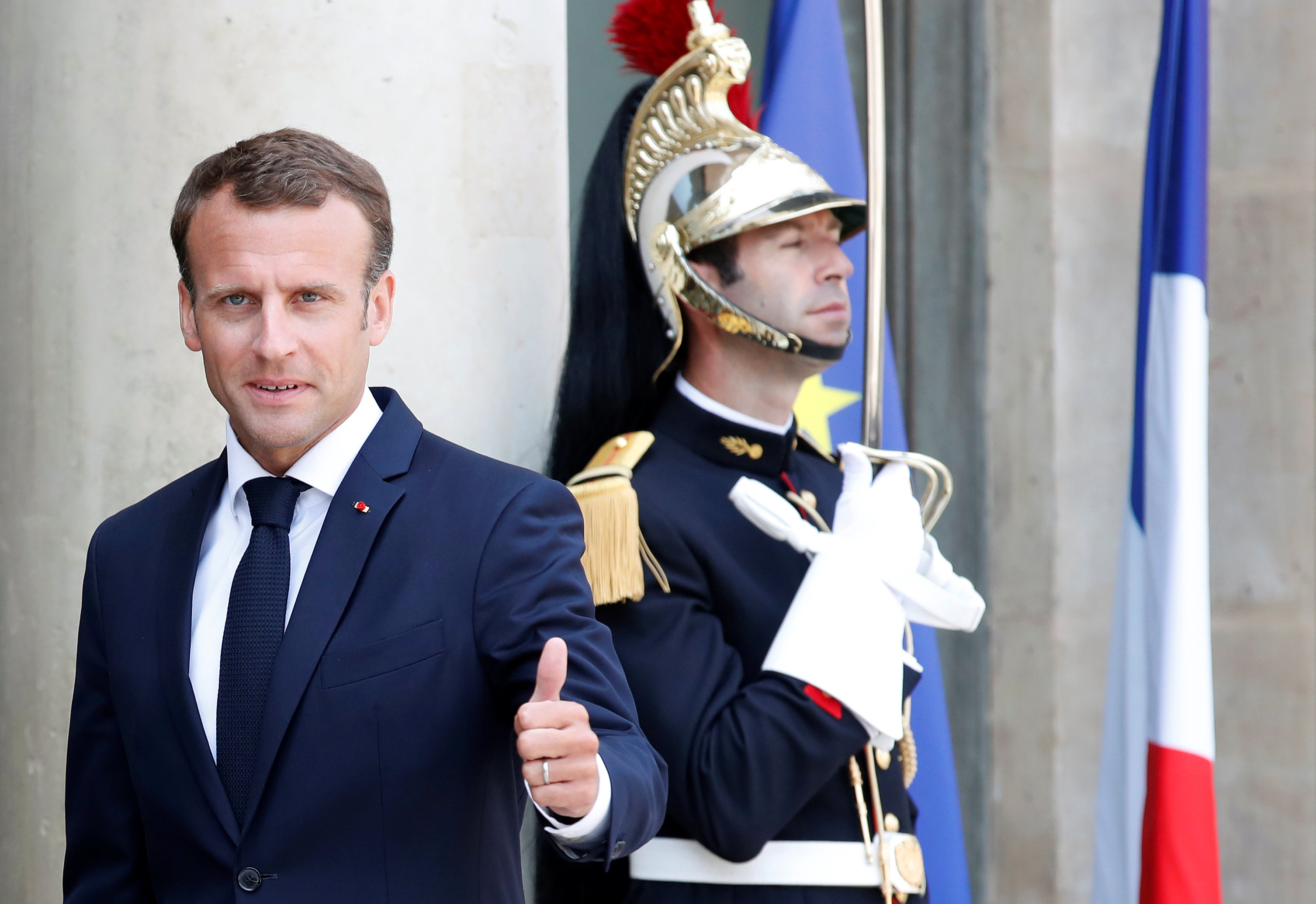 Paris: Emmanuel Macron heads to St Petersburg on Thursday seeking to win concessions from Vladimir Putin, but with Europe-US ties strained over Iran, the Russian leader may have little incentive to offer the French president a diplomatic success.
A year after hosting Putin in the regal halls of the Chateau de Versailles, Macron will seek common ground on Syria and Ukraine during a two-day visit and Moscow's help in salvaging the Iran nuclear deal abandoned by US President Donald Trump.
"The weakness of the transatlantic relationship does not give Macron sufficiently strong positions to counter Putin," said Tatiana Kastoueva-Jean, director of the Russia centre at the Paris-based Institute for International Relations.
"Putin knows that there are differences in the Western camp and as soon as someone shows weakness he exploits it."
Macron has banked on nurturing relationships with awkward leaders such as Putin, appearing engaged on the world stage but remaining non-committal and trying to mediate among opposing sides without unsettling anyone.
That policy is now being tested after Trump shunned Macron and other close allies and imposed extraterritorial sanctions on Iran, having already pulled out of the global climate pact and threatened the EU with tariffs on metals.
The US move has left Paris, London and Berlin scrambling to rescue the nuclear deal knowing their interests are not necessarily aligned with the two remaining signatories - Russia and China.
Macron hopes to entice all sides into a grand bargain that would tackle Tehran's nuclear programme and also address fears over its ballistic missile activity and regional influence as a means to bringing the United States back into the fold.
"We must have a frank dialogue with Russia, but also a demanding dialogue," Foreign Minister Jean-Yves Le Drian told France Inter radio.
A senior French diplomat was more direct: "A lot needs to be done to convince the Russians because it has interests in the Middle East, especially Syria, and its stance towards the West is aggressive."
Rather than confronting Putin directly in public, Macron has favoured private dialogue and pushed for a restoration of business and cultural ties despite European Union sanctions on Moscow.
Invited as guest of honour to an economic forum at which French firms including Total, Societe Generale and Sanofi will be present, Macron will on Friday trumpet improved trade ties that have seen French exports steadily recover after a drop in 2015.
But his broad strategy has shown its limits. Over the last year Moscow has not shifted on Syria, where it continues to back President Bashar Al Assad militarily, or in Ukraine, where last week Putin again excluded the restoration of Crimea, annexed in 2014.
Yet even after Britain accused Russia of orchestrating a nerve-gas attack on its soil - further souring EU-Russia ties - Macron has stressed that ostracising Moscow would not yield results.
"I felt the eagerness of this dynamic young and ambitious man to quickly find concrete solutions, but alas in life it is a little more complicated. The solution in Syria as in Ukraine depends not only on us or the French, but other actors," former Russian ambassador to France Alexander Orlov told Reuters.
"Nevertheless there is this positive approach on the part of President Macron... and he is ready to cooperate with Russia to find solutions."
Few see any likelihood of a breakthrough on Ukraine. However, French diplomats hope the risk of a direct confrontation between Israel and Iran in Syria and the lack of a Syrian political transition process will encourage Putin to yield some ground.
But highlighting just how one-sided Macron's efforts have been, he sent at least two letters to Putin - one last summer and one at the end of the year - outlining concrete areas in which he believed Putin could pressure Assad to ease humanitarian access in the war-torn country.
Neither letter drew a response.
"Beyond France's prestige and commercial opportunities, an effective French diplomacy must ask what levers it can use vis-à-vis recalcitrant actors," said Jalel Harchaoui, a geopolitics researcher at Paris 8 University. "It seems this basic question is no longer being asked in Paris.
"When you conduct foreign policy without a carrot or a stick, that's what you get."