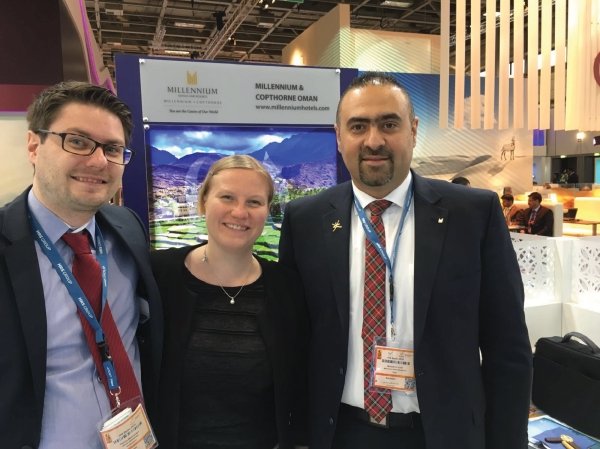 Mussanah: The Millennium Resort Mussanah concluded its participation in the 50th Internationale Tourismus-Borse (ITB), the world’s leading tradeshow, where it showcased its world-class facilities and amenities for over 180,000 visitors.
Held in Berlin over the course of five days, the resort’s delegation, led by Mustafa Al Jundi, director of Sales and Marketing, reported a strong response from attendees, which looks set to further drive the growth of tourism in Oman.
**media[372132]**
Millennium Resort Mussanah’s booth attracted a number of international travel agencies, operators, and market-based representatives from Europe in addition to tourism-related organisations. The resort’s booth showcased the Zayna Spa, diving centre, family-friendly activities and some of the world-class sporting events it has held over the years. As a result, charter companies from France and Poland have confirmed their interest in the Millennium Resort Mussanah, with future talks scheduled to discuss the project further.
Started in 1966, ITB began as a small event in Berlin that has since grown to become the largest and most important trade show in the world. This year the event welcomed more than 5,000 journalists from 80 countries, 124 delegations, four royal houses, 48 ministers, 87 ambassadors, and 10,000 exhibiting companies. Business conducted during the annual tradeshow reached 7 billion Euros for the first time.
The Millennium Resort Mussanah provides a world-class gym, health-fitness and fitness club. Other leisure activities include three beach football pitches, a beach volleyball court, tennis courts, and an 18-hole mini golf course perfectly suited for families. Not to mention the ultra-fun kids club that keeps the little ones busy during their stay. The resort retains a number of cutting edge sporting facilities, including five swimming pools, counting a ladies-only pool, two infinity pools, and an Olympic sized leisure pool. From its very own 54-berth private Marina, guests can relish an array of aquatic activities. Sailing, scuba diving, snorkelling, dolphin watching, diving, and trips to the stunning Ad Dimaniyat Islands.
Developed by Omran, the leading tourism-related investment‚ development and management company in Oman, Millennium Resort Mussanah is operated and is part of Millennium and Copthorne Hotels Plc.
The Group is an owner-operator of high quality branded hotels in diverse locations attractive to business and leisure guests, with a particular focus on significant gateway cities and Asian emerging markets. The company was launched in the Middle East in 2001 with more than 12 managed hotels in Middle East and North Africa, including more than 4,000 rooms in the region.