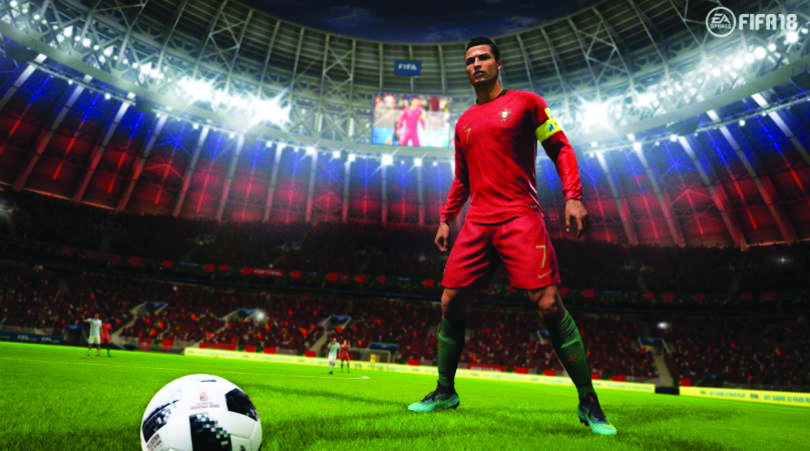 The 2018 FIFA World Cup – football’s largest showpiece to date – kicks off on June 15, less than a month from now, and in keeping with this massive spectacle on the horizon, EA Sports, those purveyors of the world’s finest football games, will be releasing a World Cup update for FIFA 18 very soon.

FIFA 18’s World Cup update for PC, Xbox and PlayStation is being released on May 29, and is available to download for free for all existing users of the game, which contains cutting-edge graphics, updated gameplay, and all 32 teams and stadiums, which will be featured at Russia 2018. New users who purchase the game will also gain access to this exclusive content.

Sure, club football is a lot more exciting to watch. You’ve got your favourite players pitted against — or sometimes alongside each other — and the competition is a lot more intense. But there is no greater honour than playing for your country. It is, in many ways, the great unifier of the beautiful game, simply because a World Cup can do things that no other tournament in the world can do. Once every four years, a ball and a goal drastically changes the world. It closes schools, it closes shops, it closes cities. It even stops wars. A simple ball fuels the passion and pride of nations. It gives people, everywhere, something to hope for. It gives countries respect, where respect is in short supply, and achieves more than politicians ever could.

The World Cup brings with it fond memories like no other, and with FIFA’s latest addition to its already long list of excellent games, you could relive the moments that have given the World Cup that sort of intangible power that courses through everyone, making them stand up with national pride and joyous fervour, at the end of an emotional rollercoaster of elation, sadness, despair, fear, hope, and even destiny.

Lionel Messi may have never won the World Cup (maybe he will this time around), but perhaps you can chart a course for Argentina that ensures you inspire them to global glory. This is sure to be Cristiano Ronaldo’s final big tournament, and you can ensure he exits the international stage much like the champion he is, and picks up the one trophy that has eluded him all his life.

There are, those of you, however, who might fancy a different challenge. You might want to unleash Egyptian Mohamed Salah’s searing pace on unsuspecting rivals, or guide Medhi Benatia’s imperious Moroccan defence to unprecedented, unexpected glory. You might prefer an even more unfancied team — Japan is kind of nice, Australia has a decent group of players, as well — and who knows, with you at the helm they could go all the way. And then there’s that ‘what if’ moment, that perfect moment that idealists dream of. What if you, a young manager ready to take on the world, headed to far away New Zealand and promised to make them world champions, only for the rest of the globe to politely remind you that you were not playing rugby, but football?

The world’s finest — Neymar, Griezmann, Lewandowski, Muller — battered your team, but you stayed strong and, slowly but surely, won the world over and earned their respect, to see your tiny team, full of nothing more than hopes and dreams, become the greatest in the world. To some, it might be wishful thinking.

To others, it has made waiting for May 29 just that much harder.

The Short and Skinny
Name: FIFA 18 World Cup Update
Genre: Sports
Produced By: EA Sports
What it’s about: The FIFA World Cup – the world’s biggest sporting competition, is just around the corner, and you can chart your own course to glory in FIFA 18’s latest instalment, which is just a few weeks away
Platforms: PC, Xbox, PS 4, Nintendo
Where to buy*: Origin, Xbox Marketplace, PS Store, EA Sports website, Amazon
*Available as free-to-download
IGN Rating: 8.1//10