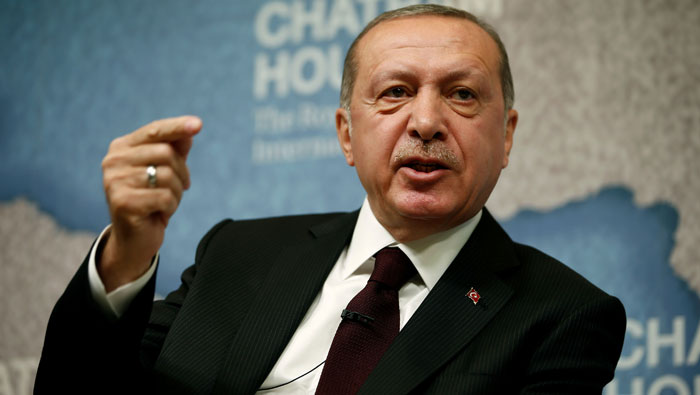 Istanbul: Turkey's Tayyip Erdogan said he plans to take greater control of the economy after presidential elections next month and the central bank will have to take note of what the president says and act accordingly.
His comments helped pushed the ailing lira to a fresh record low of 4.3990 against the dollar, bringing its losses this year to more than 13 per cent.
In an interview with Bloomberg Television broadcast on Tuesday, Erdogan said the central bank was independent but it cannot ignore signals from the head of the executive once the switch to a presidential system is complete.
"I will take the responsibility as the indisputable head of the executive in respect of the steps to be taken and decisions on these issues," he said in the interview, made during a visit to Britain.
Turkey has called snap presidential and parliamentary elections for June 24 and polls show Erdogan as the strongest candidate to win the presidential vote. Turks narrowly backed a switch to an executive presidency in a referendum last year. That change is due to go into effect after June polls.
Erdogan said that citizens would ultimately hold the president responsible for any problems generated by monetary policy.
"They will hold the president accountable. Since they will ask the president about it, we have to give off the image of a president who is effective in monetary policies," he said.
"This may make some uncomfortable. But we have to do it. Because it's those who rule the state who are accountable to the citizens," he added.
Erdogan is a fierce critic of high interest rates, seeking lower borrowing costs to boost the economy. On Friday called them the "mother and father of all evil".
In the interview, he reiterated his view that high interest rates cause inflation.
"The interest rate is the cause and inflation is the result. The lower the interest rate is, the lower inflation will be," he said.
Erdogan also said that Halkbank executive Mehmet Hakan Atilla, who was found guilty by a U.S. court of helping Iran evade US sanctions, was innocent and Turkey wanted his acquittal.
"If Hakan Atilla is going to be declared a criminal, that would be almost equivalent to declaring the Turkish Republic a criminal," he said.