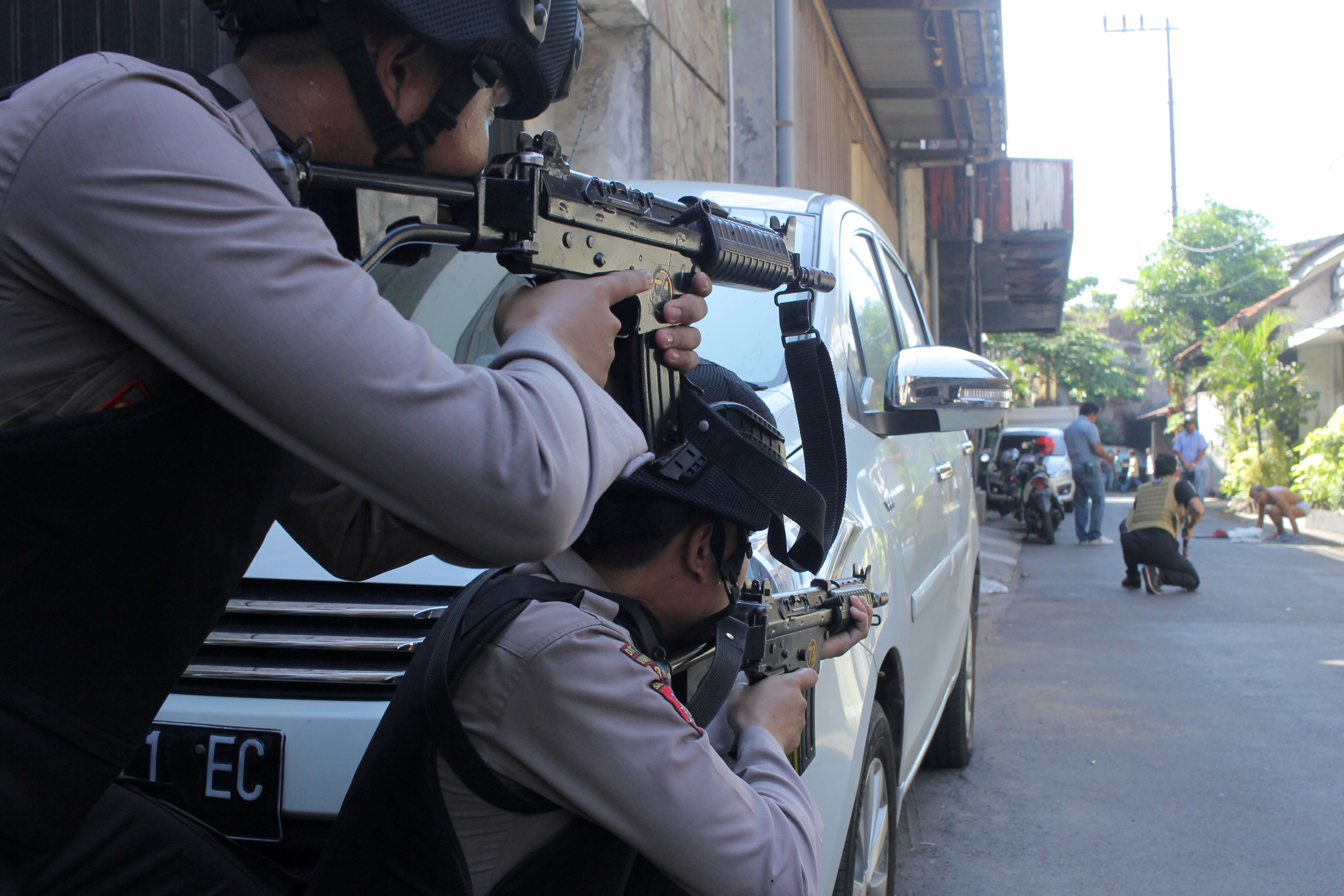 Surabaya (Indonesia): A family of militants in Indonesia carried an eight-year-old into a suicide bomb attack against police in Surabaya on Monday, a day after another militant family killed 13 people in suicide attacks on three churches in the same city.
The suicide bombers rode two motorbikes up to a checkpoint outside a police station and blew themselves up, Tito Karnavian, the police chief in Indonesia's second-largest city, told a news conference.
He said the child survived the explosion, and CCTV footage showed a child stumbling around in the aftermath.
Four officers and six civilians were wounded in the attack, East Java police spokesman Frans Barung Mangera said.
President Joko Widodo branded the attacks in Surabaya the "act of cowards", and pledged to push through a new anti-terrorism bill to combat militant networks.
After some major successes tackling militancy since 2001, there has been a resurgence in recent years, including in January 2016 when four suicide bombers and gunmen attacked a shopping area in central Jakarta.
Police suspected Sunday's attacks on the churches were carried out by a cell of the IS-inspired group Jemaah Ansharut Daulah (JAD), an umbrella organization on a US State Department terrorist list that is reckoned to have drawn hundreds Indonesian sympathizers of IS.
"In the case of Surabaya, they escaped detection, but once it happened we moved fast to identify their network," Karnavian said.
The father of the family involved in those attacks was the head of a JAD cell in the city, the police chief said.
Earlier, police said his family was among 500 IS sympathizers who had returned from Syria, but the police chief said that was incorrect.
During the hunt to for the cell, police shot dead one suspect and arrested four others.
The police chief said the JAD cell may have been answering a call from IS in Syria to "cells throughout the world to mobilize."
He said the imprisonment of JAD's leader, Aman Abdurrahman, could be another motive, and cited clashes with prisoners at jail near Jakarta last week in which five counter-terrorism officers were killed.
In another incident in Sidoarjo, south of Surabya, Karnavian said police recovered unexploded pipe bombs an apartment where an explosion killed three members of a family alleged to have been making bombs.
Three children from the family survived and were taken to hospital.
In all, 25 people have died since Sunday in attacks, including 13 suspected militants, Karnavian said.
CCTV footage of the blast outside the police station on Monday morning showed two motorbikes arriving at a checkpoint next to a car followed by an explosion as officers approached.
Security experts said it was the first time in Indonesia that a child had been used by militants on a suicide mission.
"The objective of using a family for terror acts is so it is not easily detected by the police," said Indonesian terrorism analyst Stanislaus Riyanta.
He said that families could also avoid communicating using technology that could be tracked.
Indonesia's chief security minister said on Monday that police backed by the military would step up security across Indonesia.
President Widodo said he would issue a regulation in lieu of a new anti-terror law next month if parliament failed to pass the bill.
Police have complained that current laws do not allow them to detain suspects to prevent attacks.