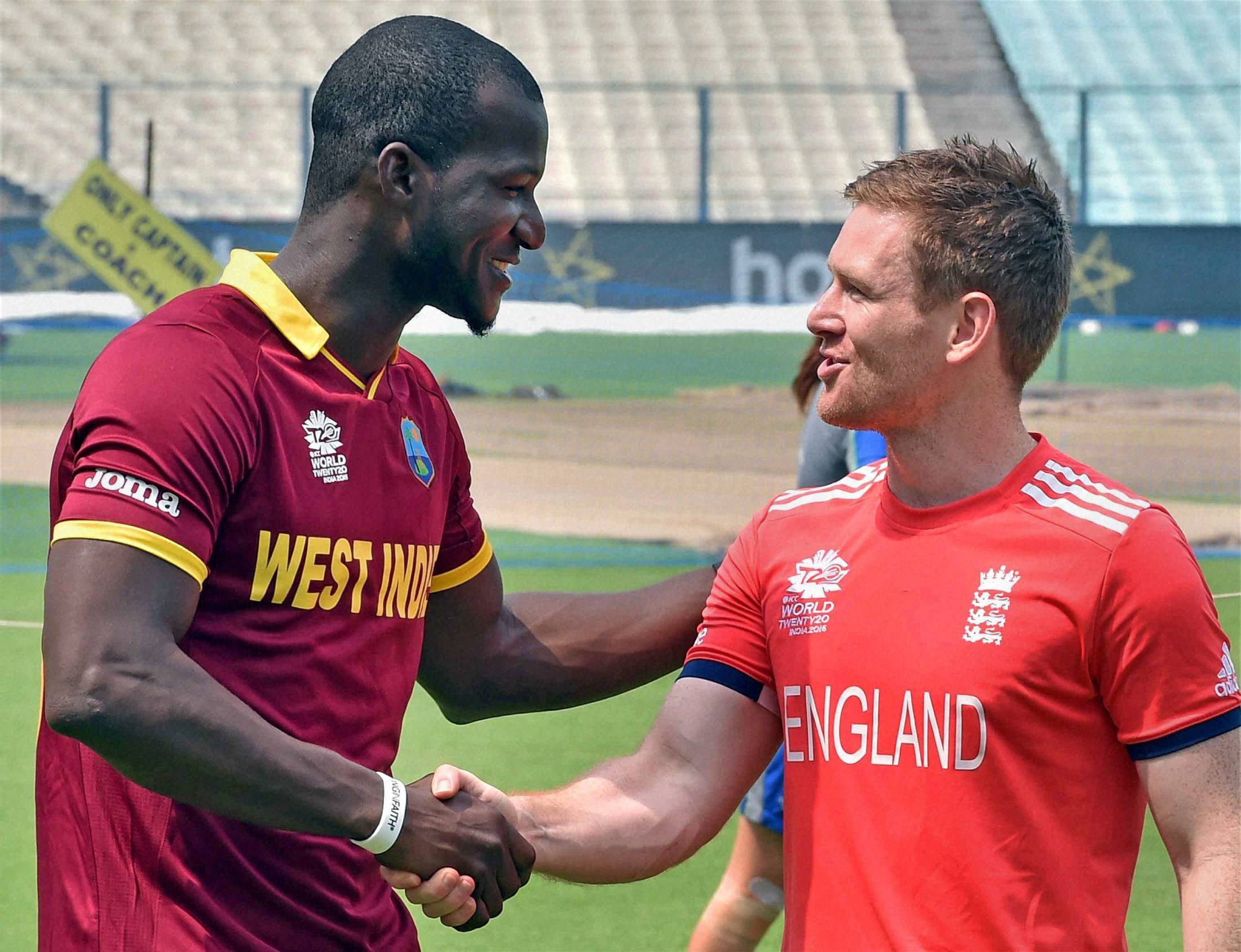 Kolkata: West Indies' rag-tag army of short-format mercenaries will be hoping they have the weapons to overcome a fearless England in Sunday's World Twenty20 final as both sides target the honour of being the first to claim a second title in the tournament.
For a group of players who nearly boycotted the event over a contractual dispute with their board, Darren Sammy and his troops have waltzed into the Kolkata final displaying all the Caribbean flair that has earned them global admiration.
If Twenty20 cricket is essentially about power-hitting, no team does it better and more unabashedly than the West Indies.
England have first-hand knowledge of that destructive potency, having been blown away by Chris Gayle's 47-ball century in a Super 10 shellacking in Mumbai a fortnight ago.
Revenge may be regarded as a dish best served cold but Eoin Morgan's men would probably like nothing more than to exact it in the heat of a World Cup final.
A task easier said than done against a West Indies outfit packed with swashbuckling players who ply their trade in lucrative Twenty20 leagues around the globe.
What makes the job doubly difficult is that Sammy's men have proved in India that they are more than just a one-man army who bank on Gayle to punch holes in their opponents.
Marlon Samuels, Lendl Simmons and Andrew Russell have stepped out of their illustrious team mate's shadow and made their own mark in the last month.
"We said this before the tournament that Chris is under pressure," Sammy said after the exhilarating semi-final victory against hosts India.
"He is our best Twenty20 player but we have 15 match-winners in this side," he added.
The ever-smiling all-rounder is seeking to become the first captain to lead a team to a second World Twenty20 title but West Indies are anything but infallible.
Peaking England
They showed two extremes to their game in the last couple of outings, slumping to an embarrassing defeat to qualifiers Afghanistan before silencing a raucous home crowd in Mumbai as they knocked out favourites India.
Also, the England they will face on Sunday is not the same team they thumped by six wickets in the group stage last month.
Morgan's side have peaked gradually in the tournament since that defeat and seem to have found the right rhythm and combinations.
They accomplished a high-scoring chase against South Africa, recovered well to subdue an upset-minded Afghanistan, held their nerve to edge out Sri Lanka and stunned the previously unbeaten New Zealand with a near-perfect game in the semi-finals.
Their batsmen -- especially Jason Roy, Joe Root and Jos Buttler -- have batted with refreshing freedom and their catching has been extraordinary.
Equally, if not more impressive, has been their bowling at the death.
Ben Stokes appeared to have ice in his veins in the final over against Sri Lanka to thwart Angelo Mathews's audacious bid to pull off a sensational victory as England secured their place in the last four.
Against New Zealand, Stokes and Chris Jordan pacified the Black Caps in the final four overs, which cost only 20 runs and garnered five wickets, to restrict them to a total that England could chase down with 17 balls to spare.
Morgan has freed his batsmen from the weight of expectation and it is showing in the team's performance.
"That's the way a lot of us play," Roy said of England's aggressive batting after his 44-ball innings of 78 set the foundations for victory over New Zealand.
"The whole team has got that kind of licence, that kind of opportunity to go out there and do what they want and be free with their skills."