EU plans to step up relations with Oman 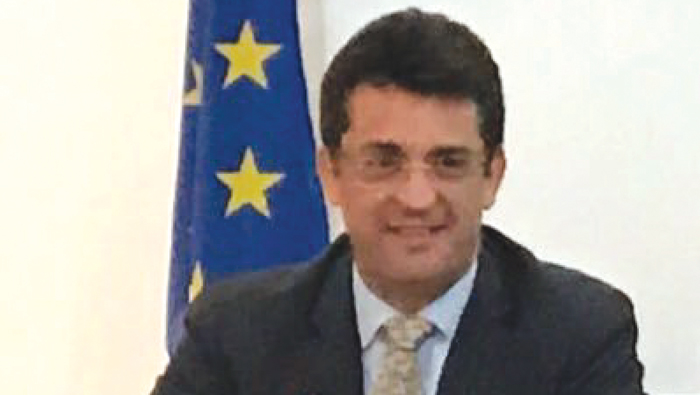 Muscat: The European Union considers Oman an important partner in the Gulf and aims to step up the bilateral engagement for multidimensional cooperation covering political dialogue, economy and trade, sectoral and regional cooperation, Head of the EU delegation to the Sultanate, Ambassador Michele d’Urso Cervone, said.
On the occasion of Europe Day, which the EU celebrates on May 9, the ambassador said the EU was working closely with Oman on regional issues and working jointly in supporting the UN and inclusive political processes in the region.
“The EU considers Oman an important partner in the Gulf; it is an independent and prosperous country with a widely acknowledged tradition of promoting regional peace and stability. Oman plays an important role within the GCC and as upcoming Presidency coordinates closely with Kuwait and the GCC General Secretariat,” he said.
“Our ambition is to step up our bilateral engagement with Oman, to have a comprehensive and multidimensional cooperation covering political dialogue, economy and trade, sectoral and regional cooperation. We can further build on the existing mutual trust, to widen our scope of cooperation,” he added.
The EU is also one of the main economic partners for Oman; it is the third largest trading partner of Oman and the largest source of Foreign Direct Investment.
Reform programmes
The ambassador said, “During the last decade, the Omani Government has laid down significant reform programmes aimed at developing and diversifying the economy. The EU intends to support these reforms by sharing its best practices and through information-sharing in different fields, through projects of technical assistance.”
“Recently, the EU participated in the Tanfeedh laboratories, contributing with expertise in financing large projects on a commercial basis via public-private partnership and privatisation. This cooperation was the first step in EU’s efforts to further support the economic diversification efforts in Oman. EU is also ready to mobilise European investors with an interest in the region, to take part in the relevant project.”
The EU, the ambassador said, planned to enhance people-to-people relations with Oman with programmes such as the Jean Monnet call and Erasmus Mundi Plus that allowed exchanges between university students since education was the key in building bridges between cultures.
“Another important topic is education and research, where we would like to see more Omani students attending European universities through the tools that we offer, namely the Erasmus Mundus exchange programme. Education is a very important building block in diversification efforts, especially when the aim is to build a knowledge-based society. These exchange programmes furthermore enable building closer partnerships between younger generations from both regions,” he added. “The EU and Oman share interest in the stability and security of the broader Gulf region and can mutually support each other,” the ambassador added.
Europe Day
The EU celebrates Europe Day on May 9, marking the anniversary of the Schuman Declaration of 1950, setting up a European joint authority to oversee production of coal and steel.
“Since the birth of the European Communities in 1957, the citizens of our Member-States have enjoyed more than six decades of unprecedented peace, prosperity and security, after two catastrophic wars in Europe between 1914 and 1945, which left millions dead, and a continent devastated, divided and prostrated.
For countries that had long been at war, European integration has been the most successful peace project in our history, it is also a common story of prosperity, equality, well-being and sustainability, a shared success-story,” the envoy said.