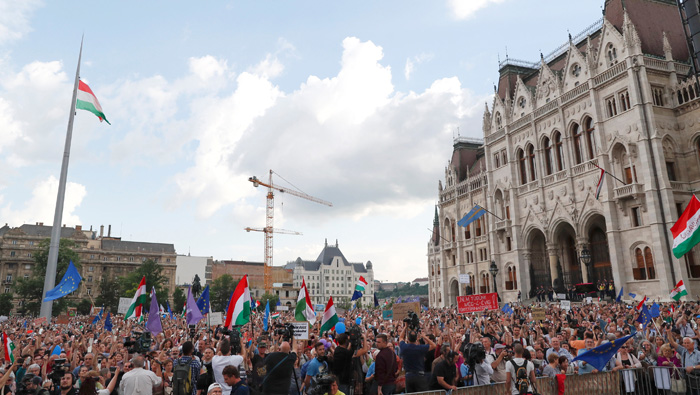 Budapest: Hungary's parliament convened on Tuesday for its inaugural session after an election landslide gave Prime Minister Viktor Orban a third straight term, while around 1,000 people protested outside against what they call his authoritarian rule.
Right-wing nationalist Orban has increased his control over the media and put allies in charge of formerly independent institutions. His hostility to accepting migrants into Hungary has put him in conflict with the EU, but proved popular in last month's vote, particularly in rural areas.
Orban is due to be elected prime minister on Thursday in a vote expected to be a formality, and address parliament.
The protesters in Budapest, waving national and EU flags, said Orban had stifled the media and manipulated election rules in ways that favoured his party. "I regard this government as illegitimate," said demonstrator Edit Glasz.
"By modifying the election law he secured another two-thirds majority in parliament." Protesters chanted "Democracy, democracy!" and put up a banner outside parliament reading "The Constitution is Illegitimate".
Orban's economic policies have put the central European country on track for economic growth of four per cent.
His Fidesz party holds 133 of 199 parliamentary seats. Orban is the longest-serving premier in post-communist Hungary.