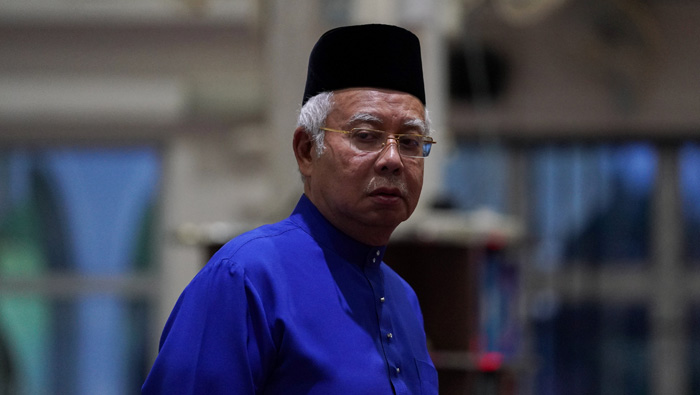 Kuala Lumpur: Malaysian Prime Minister Najib Razak's ruling coalition has lost more ground in the lead-up to Wednesday's general election, but it could still win enough parliamentary seats to cling on to power, a survey by an independent polling firm said.
Scandal-hit Najib, whose Barisan Nasional (BN) alliance has ruled Malaysia for more than six decades, is pitted in a fierce contest against his 92-year-old former mentor, Mahathir Mohamad.
The eve-of-poll survey published by Merdeka Centre on Tuesday showed Najib's coalition would win just 37.3 percent of the popular vote in peninsular Malaysia, which accounts for nearly three-quarters of the seats in parliament, down from the 40.3 percent the firm had predicted last week.
The Mahathir-led opposition alliance's support also fell slightly to 43.4 per cent from 43.7 per cent, it showed.
The Islamist Parti Islam se-Malaysia (PAS), which is not part of Mahathir's bloc, saw support increase by 3.3 percentage points to 19.3 per cent.
The polling of the popular vote did not cover the Borneo states of Sabah and Sarawak, which have historically been pro-BN, although there have been recent signs of a swing away from the government in Sabah.
The survey predicted that Najib's coalition would win 100 of the 222 seats in parliament, while Mahathir's alliance would win 83 seats, with contests in 37 constituencies too close to call.
The winning party needs to get at least 112 seats to form a government. The ruling coalition won 133 seats in the 2013 election, despite losing the popular vote.
In his final campaign speech, broadcast live on state media, Najib offered last-minute promises, including an income tax exemption for people aged 26 and under, two extra public holidays and waiver of road tolls for five days around the Muslim festival of Eid, which marks the end of Ramadan.
Mahathir, who was livestreaming his speech to a rally in his constituency on the island of Langkawi at the same time, urged voters not to fall for "bribes". "Don't let a bit of money make you pawn the country forever," Mahathir said, who led the Southeast Asian nation from 1981 until 2003.
"This is what will happen if Najib stays on as prime minister."
Merdeka said in a statement that this would be "one of the most contested elections ever in the country's political history".
"The high number of marginal seats (37), implies that voter turnout will be a critical factor in determining the outcome of many seats on election day," the pollster said in the statement, adding that it predicted BN would retain federal power.
Najib's coalition failed to win the popular vote in the last election in 2013, getting 47.3 per cent of the votes in what was seen as a setback for the ruling alliance even though it retained power.
Najib faces far greater risks this time than in any previous election, and analysts have warned a weak performance could trigger an internal revolt against the 64-year-old premier.
Merdeka's estimated tally of seats per state showed BN winning only seven out of 26 parliamentary seats in Johor, the birthplace of Najib's United Malay National Organisation (UMNO), with the opposition getting 14.
Five seats in the bellwether state were too close to call, it said. The ruling alliance would win all but three parliamentary seats in Kelantan state in the northeast, which is governed by the conservative PAS, the survey predicted.
In an interview on pro-government television late on Monday, Najib said he was confident of winning the election. "Our political base is still strong and intact. That is why I am confident, because we actually have strength," said Najib, whose popularity has taken a hit from rising living costs and a graft scandal at state fund 1Malaysia Development Berhad (1MDB).
Najib has consistently denied any wrongdoing over the billions of dollars allegedly siphoned off from the state fund, which he founded, and he has been cleared of any offence by Malaysia's attorney general.
In the election run-up, opposition leaders and civil society groups have complained that measures such as gerrymandering have tilted the poll in BN's favour. The Human Rights Commission of Malaysia, SUHAKAM, on Tuesday urged the election panel to avoid actions seen as partisan and selective. "SUHAKAM believes the level playing-field is affected with instances of questionable disqualification of candidates and money and gifts being distributed," it said in a statement.