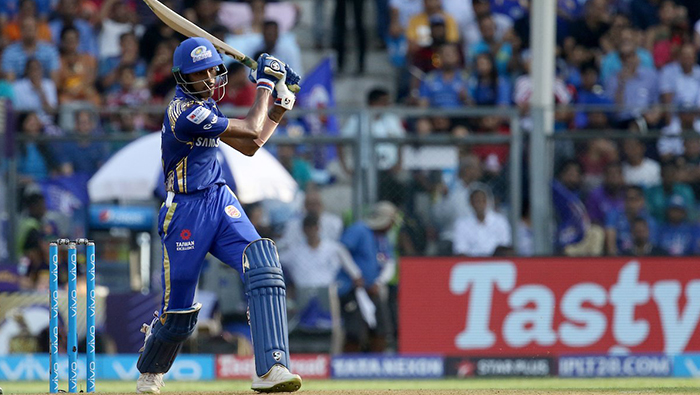 Mumbai: Perennial slow starters Mumbai Indians are on course for a trademark late-season charge into the Indian Premier League (IPL) playoffs, thanks largely to some impressive performances by all-rounder Hardik Pandya.
The defending champions, owned by India's richest man Mukesh Ambani, lost their first five matches but still reached the 2014 playoffs before completing a fairytale tournament victory a year later after losing their opening four fixtures.
The 2016 edition saw the Rohit Sharma-led side win one out of their first four matches before they appeared to shed the tardy-starter tag last season, going on to win their third IPL title after 10 wins in 14 group stage games.
The lack of victories at the start of the campaign returned to haunt them again this season as Mumbai lost five of their opening six games, appearing doomed to miss out on the playoffs as their title defence faltered.
They have, however, managed to arrest the slide with three wins in four matches as Pandya's all-round abilities came to the fore in his side's turnaround.
Pandya stole the show in Mumbai's 13-run win over the Kolkata Knight Riders on Sunday with an unbeaten 35 off 20 balls and then dented the opposition's seemingly comfortable chase with figures of two for 19.
The double strike means the seamer has claimed 14 victims to become the leading wicket-taker in the tournament as Mumbai moved up to fifth in the eight-team standings, two points behind the fourth and final playoff spot.
"Really, really happy for him," Hardik's elder brother and team mate Krunal said after Sunday's win over KKR.
"He has been bowling really well and he has transformed himself as a bowler. He has improved over a period of time and that's a great sign for a cricketer.
"The way he's batting also, he's in touch. And everybody knows he is a gun fielder. I am happy that everything is coming out good for him."
The 24-year-old seamer and hard-hitting batsman cemented his spot in the Indian side last year in all three formats of the game and is considered the team's cleanest striker of the ball.
On Sunday, he kept the KKR batsmen in check with smart changes of pace during his four-over quota, including an 18th over that went for only six runs.
"As a team, we believe we can do it. We have done it in the past though obviously it's difficult," Pandya said at the post-match press conference when asked if his team can once again go all the way.
"I don't like anything which comes easy. I like difficult things. This is a challenge and I will love to take it."