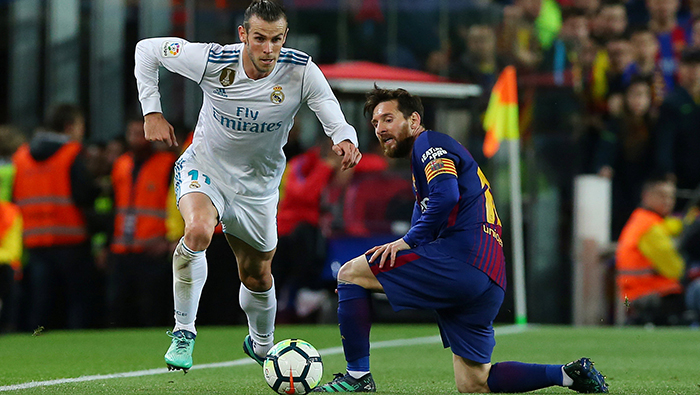 Barcelona: Real Madrid forward Gareth Bale lashed home to deny La Liga champions Barcelona victory in an ill-tempered 'Clasico' which finished 2-2 at the Nou Camp on Sunday after the home side had Sergi Roberto sent off at the end of the first half.
Luis Suarez volleyed unbeaten Barca into the lead after 10 minutes following a gut-busting run and cross from Roberto while Cristiano Ronaldo levelled for Champions League finalists Real five minutes later from close range.
However, the Portugal forward's ankle was trodden on by Gerard Pique in the process and he was substituted at halftime. Coach Zinedine Zidane said the injury was "a small thing" and Ronaldo will be fit for the Champions League final.
Bale had risked getting sent off for raking his studs against Samuel Umtiti's leg but escaped without a booking on that occasion and Roberto was sent off moments later for hitting Marcelo following an off-the-ball tussle.
Lionel Messi scored a mesmerising, record-extending 26th Clasico goal to put 10-man Barca back in front after 52 minutes but Bale, who had contributed little, silenced the Nou Camp with a thumping strike from the edge of the area in the 72nd.
Champions Barca have 87 points while Real are third in the Liga standings with 72 after 35 games. Atletico Madrid, who lost their unbeaten home record in a 2-0 defeat by Espanyol erlier on Sunday, are second on 75 but have played one game more.
"This was a Clasico with nothing at stake but we saw a great game," Zidane told reporters. "We both went out to play well and win. We both played a great game and football is always the most important thing, not the controversy."
Eight yellows
This was the first 'Clasico' in a decade which had no bearing on the title race but the game was still played with all the usual passion and tension which makes it the most famous club fixture in Europe.
Referee Alejando Hernandez Hernandez showed a total of eight yellow cards as well as the straight red for Roberto.
Bale was eventually booked as was the usually even-tempered Messi, who made an uncharacteristically aggressive challenge on Sergio Ramos after the Real captain had an ugly confrontation with Suarez which led to both players getting yellow cards.
Suarez appeared to have fouled Raphael Varane in the build-up to Messi's goal and the Uruguayan forward had a goal ruled out for offside three minutes later.
"Clasicos should be played like this, it was a beautiful game," Suarez told reporters.
"We wanted to win it, Sergi's sending off damaged us, especially against a team like Real Madrid. But a draw also isn't a bad result for us given how the game went."
Both sides pushed for a winner and Real could have had a penalty when Jordi Alba caught Marcelo but Barca clung on to remain unbeaten in the league with three games to go.
Barcelona's players remained on the pitch after the game to celebrate their double success with the home fans, having clinched the title last week at Deportivo La Coruna and won the King's Cup final against Sevilla on April 21.
Real refused to offer the traditional guard of honour to the champions before the game so Barca defender Gerard Pique asked the Catalan club's coaching staff to form two lines either side of his team mates as they left the pitch.