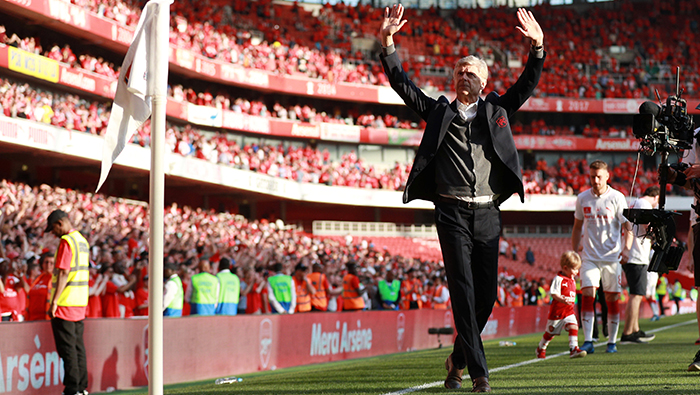 London: Arsenal manager Arsene Wenger signed off in style as they thrashed Burnley 5-0 in his last Premier League home game on Sunday with the kind of dominant performance he would have wanted after 22 years in charge.
Wenger was given a guard of honour from both teams and the match officials before kickoff, and received roars of support throughout the match from the home fans, most of whom had donned their complimentary red "Merci Arsene" T-shirts.
Arsenal's January record signing, Gabon striker Pierre-Emerick Aubameyang, opened the scoring in the 14th minute at The Emirates, racing into the area to guide home Alexandre Lacazette's cross with the outside of his right foot.
France striker Lacazette then doubled the lead for the Gunners just before halftime, volleying in a low ball from Hector Bellerin on the right side of the goal.
**media[869339]**
Second-half strikes from Sead Kolasinac, Aubameyang again and Alex Iwobi put the game well beyond Burnley's reach.
Burnley, who narrowly avoided relegation last season but are now preparing for their first season of European football since 1967, with qualification for the Europa League, had been hoping before the game to pull level on 57 points with Arsenal.
Instead, the result means the Gunners will finish the season in sixth place, with Burnley one place behind them in seventh.
The visitors suffered an early setback when Ashley Barnes, their joint top-scorer this season, crashed into the back of Arsenal's Granit Xhaka and walked slowly off the field minutes later, cradling his left arm, to be replaced by Sam Vokes.
Arsenal's emphatic victory, which matched their best result this season, was little consolation for the midweek loss in the Europa League semi-final to Atletico Madrid, however, which meant they miss out on Champions League football next season.
"Merci, Arsene"
After the game the Arsenal team and staff formed another guard of honour to say farewell to Wenger and captain Per Mertesacker, who will manage the club's academy next season.
The German central defender came on briefly at the end of the match and drew huge cheers every time he touched the ball.
Former Arsenal and Scotland goalkeeper Bob Wilson then led the tributes to Wenger on the pitch, backed by huge letter-boards spelling out "Merci Arsene".
"He has built the Arsenal that we know and love today. He has changed the face of football in this country. Hundreds of players owe their careers to him," Wilson told the crowd, all standing for the occasion.
Pat Rice, Wenger's assistant throughout his years at the club, then presented the 68-year-old Frenchman with the gold "Invincibles" trophy given to the club after their 2003-04 season, when the team won the league without losing a match.
Wenger first expressed his best wishes for his old rival, former Manchester United boss Alex Ferguson, who was taken into hospital on Saturday after suffering a brain hemorrhage, before bidding his own farewell to the fans.
"Thank you all for having me for such a long time - I know that's not easy," he said, drawing a laugh from the crowd.
"Above all I am, like you, an Arsenal fan," Wenger said to warm applause before saying farewell.