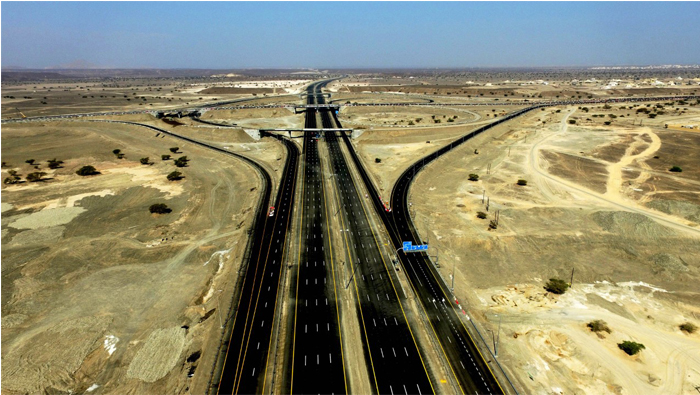 Muscat: The new Al Batinah Expressway will have a speed limit of 120km per hour and incorporates world-class safety features, according to a senior transport ministry official.
The Ministry of Transport and Communications will open Al Batinah Expressway to traffic today. Salim Mohammed Abdullah Al Naimi, Undersecretary of Transport and Communications, said, “The road has been designed with the latest international safety standards and specifications.”
While the road has a speed limit of 120km per hour, the entire stretch is covered with state-of-the-art cameras to ensure a safe driving experience for visitors and residents.
“The Al Batinah Highway project is considered to be one of the infrastructure projects, which has created large and diverse business opportunities for small and medium enterprises (SMEs) and local companies,” said Al Naimi.
“The ministry is continuing its procedures on the implementation of a number of important links between Al Batinah Road and Al Batinah Expressway.”
The new expressway is part of the Public Transport Strategy unveiled by Transport Minister Dr. Ahmed bin Mohammed bin Salim Al Futaisi last year. Since then, Oman’s mega-road project has been completed, adding 270km to the Sultanate’s new road network.
The road runs from Barka to Shinas. Safety has been built into all aspects of the new road, to be unveiled this morning by Al Futaisi.
“It is considered a safer road as it includes four lanes and 11,400 lighting poles, in addition to 250,000 high-quality road reflectors. It also includes 1,106 concrete culverts, 17 flyovers, 25 wadis crossing bridges and 12 underpasses,” Al Naimi added.
Speaking to the Times of Oman, Ali Al Barwani, CEO of the Oman Road Safety Association, said, “The most important thing for all of us is to reduce the loss of life. We have cameras all over Oman’s roads now to improve safety and security, and we must always ensure that our roads follow international standards.”
“When it comes to saving lives, no effort is too much, because the person who is driving the car on the road may be someone’s mother or father. He/She may be someone’s child or brother or sister, and we don’t want a situation where the last time you see them is when they are leaving to go to their car and end up never coming back. That is a very sad situation and you would never want anyone to suffer that,” he added.
“There are some people who think they can do anything on the roads, and to them, I say that the laws are there for a reason. There might be those who may not agree with these laws, but these laws are there to benefit everyone. Not everyone is an expert driver. Some people are just starting to drive, others are still learning, so we must never forget this, and make sure the roads are safe for everyone,” he said.
An official from the Royal Oman Police added, “There are cameras to ensure that every kilometre keeps road users safe at all times.”
The Ministry of Transport and Communications will be continuing to add to the Sultanate’s extensive road network, with over 100 more roads to be added before the end of 2018. They include the completion of the Sharqiyah Expressway, as well as new roads linking Ibri-Yanqul, Barka-Nakhl, and Adam-Thumrait.
According to recent data released by the police, in 2017, a total of 3,845 accidents occurred, down from 4,721 the previous year. Some 640 deaths occurred in 2017, compared to 692 in 2016. And 3,134 people were injured in 2017, compared to 3,261 people in 2016.
Most of the accidents took place during the day in 2017, with 2,124 accidents, compared to 2,584 in 2016. The number of accidents that occurred at night in 2017 stood at 1,721, compared to 2,137 in 2016. As many as 417 Omanis lost their lives in 2017, 89 of them females.
The number of expats who lost their lives in road accidents stood at 223. While 2,353 Omanis were injured in road accidents in 2017, the number was 841 for expats.
Fridays saw the most deaths from road accidents in 2017, with 109 deaths resulting from 532 accidents.
Saturdays came next with 106 deaths, followed by Tuesdays, which recorded 101 deaths from 590 accidents.
November recorded the highest number of accidents in 2017, with 387accidents. June saw 382 accidents and July saw 361 accidents.
Speeding was still the most common cause of accidents (2,261 in 2017, down from 2,499 in 2016). Negligence (552 compared to 672) and improper behaviour (521 compared to 705) were also leading causes of accidents and deaths on the roads.