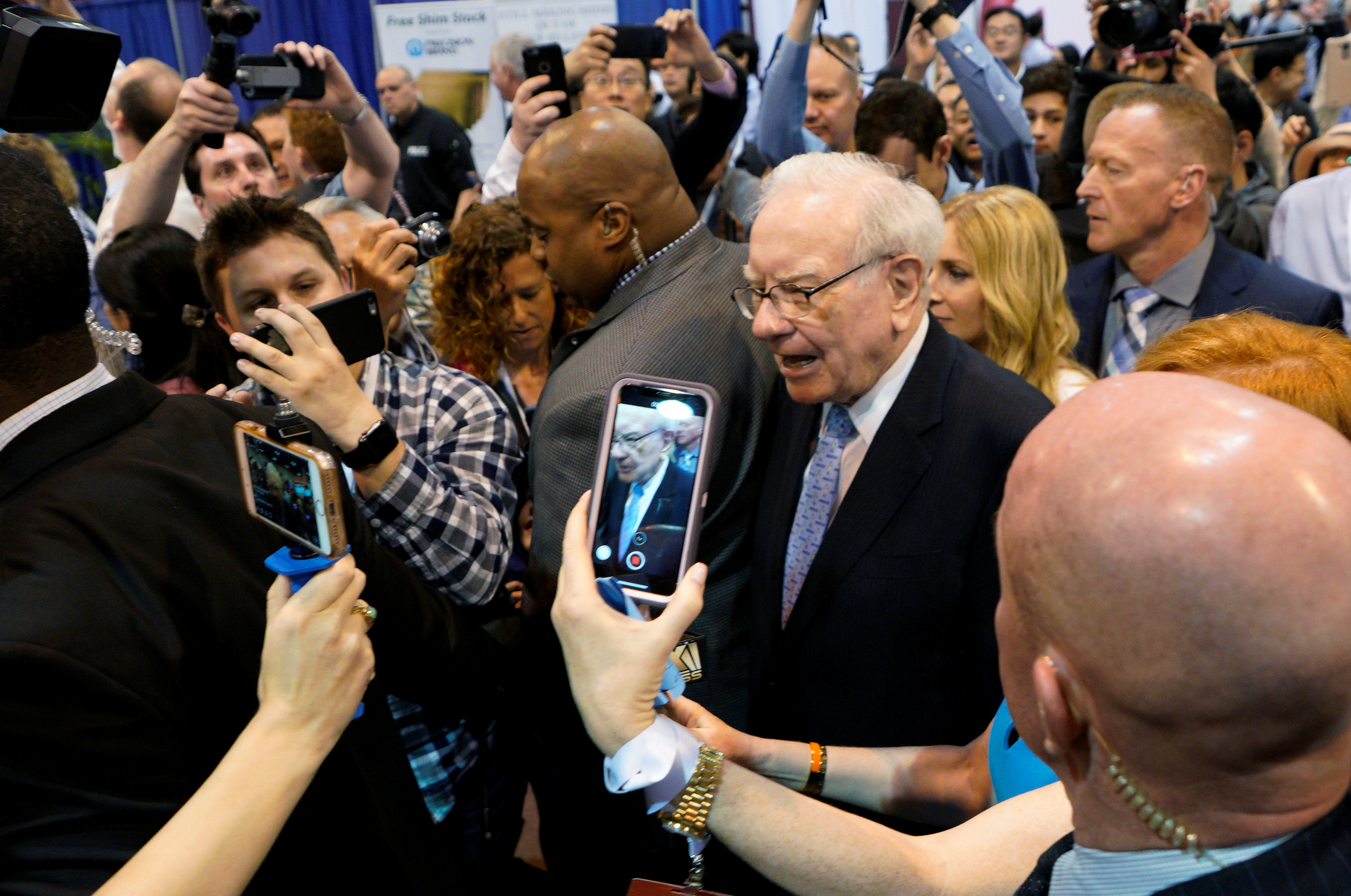 Omaha: Billionaire Warren Buffett has been buying a boatload of Apple Inc shares and on Saturday suggested he would buy even more shares at the right price.
At Berkshire Hathaway Inc's annual shareholder meeting, Buffett credited Apple with developing "extremely sticky" products to which consumers become attached and endorsed Apple's decision to buy back its own stock, saying it was the technology company's most productive use of cash.
"We would love to see Apple go down in price," Buffett said. Berkshire is now Apple's third largest shareholder, behind Vanguard Group and BlackRock Inc.
"I'm delighted to see them repurchasing shares," Buffett said, just two days after he revealed having bought 75 million additional Apple shares, and four days after Apple said it may repurchase $100 billion of stock. At the end of 2017, Berkshire had owned 165.3 million shares.
"I love the idea of having our 5 per cent, or whatever it is, maybe grow to 6 or 7 per cent without our laying out a dime."
And Buffett described it as a mistake that he never thought Alphabet Inc's Google and Amazon.com Inc made sense as investments for Berkshire.
Buffett, 87, and his longtime partner and fellow billionaire Charlie Munger, 94, also took pointed questions on China, Wells Fargo & Co, guns, healthcare and their investment choices from shareholders, journalists and analysts at the more-than-six-hour meeting in Omaha, Nebraska.
The questions also elicited views on politics from the "Oracle of Omaha" and Munger.
Buffett said it was unlikely that the United States and China would come to loggerheads on trade and believed the countries would avoid doing "something extremely foolish."
"The United States and China are going to be the two superpowers of the world, economically and in other ways, for a long, long, long time," Buffett said, and that any tensions should not jeopardise the win-win benefits from trade.
"It is just too big and too obvious... that the benefits are huge and the world is dependent on it in a major way for its progress, that two intelligent countries (would) do something extremely foolish," he said. "We both may do things that are mildly foolish from time to time."
The Trump administration has drawn a hard line in trade talks with Beijing, demanding a $200 billion cut in the Chinese trade surplus with the United States, sharply lower tariffs and advanced technology subsidies, people familiar with the talks said on Friday.
Buffett suggested US President Donald Trump should be an "educator-in-chief" on the invisible benefits of trade.
Munger, meanwhile, answered a question on steel tariffs imposed by the White House by acknowledging that US producers are hurting.
"Even Donald Trump can be right on some of this stuff," he said.
Asked why Buffett was willing to do business with gun makers, he retorted, "I do not believe in imposing my political opinions on the activities of our businesses."
The billionaire investor said US corporate tax cuts were good for shareholders but cautioned that the long-term effects of economic choices could be hard to gauge.
And Buffett predicted "bad endings" for cryptocurrencies, such as bitcoin, and said long-term US government bonds were a terrible investment because inflation would consume their returns.
Buffett defended Wells Fargo and its chief executive, Tim Sloan, when asked when Berkshire would ditch the bank, one of its largest common stock holdings. Many shareholders applauded the question.
Buffett said the bank had committed the "cardinal sin" of incentivizing employees into "kind of crazy conduct." US regulators imposed $1 billion of fines last month over lending abuses.
But he maintained that the bank was not "inferior," as an investment or morally, to its main rivals.
Berkshire owned $25.2 billion of Wells Fargo stock as of March 31, down 14 per cent from year end as a series of scandals weighed on the bank's reputation.
Wells Fargo investors last week gave strong backing to the bank's directors and executives on Tuesday, indicating confidence in its overhauled leadership to rebound.
Buffett addressed his alliance with another banker, JPMorgan Chase & Co's Jamie Dimon, and Amazon's Jeff Bezos to tackle healthcare.
Buffett said US healthcare costs are a tapeworm on the economy, and he said the venture partners expect to name a chief executive within a couple months.
Buffett faces a challenge investing Berkshire's more than $108 billion of cash and equivalents, including for acquisitions, saying his "phone is not ringing off the hook with good deals."
Shortly before the meeting, Berkshire ended its more than year-long stretch of falling operating profit, while a new accounting rule caused the conglomerate chaired by Warren Buffett to suffer an overall net loss. Buffett said the net results were not representative of the business.
The accounting change required Berkshire to report unrealised losses in its equity portfolio, which totaled $170.5 billion at year end, regardless of whether it planned to sell those stocks.
Berkshire's net loss was $1.14 billion, compared with profit of $4.06 billion a year earlier.
But operating profit, which excludes investment and derivative gains and losses, rose 49 per cent to a record $5.29 billion, or about $3,215 per Class A share, higher than the $3,116 per share analysts had expected, according to Thomson Reuters I/B/E/S.
Shareholders have been enthusiastic about Berkshire, which sent out slightly more tickets to this year's extravaganza than in 2015, when an estimated 42,000 celebrated Buffett's 50th year at the helm. An even larger audience likely watched online via Yahoo Finance.
Outside the convention centre, Berkshire shareholders lined up for prime seats in the middle of the night.
William Robertson, a Scotland native who fights fires and does forestry work in Switzerland, said he lined up at 11:30pm on Friday, 7-1/2 hours before doors opened. This year's meeting is his third.
"It gets me first place in the queue, I think when people go to so much effort it shows Warren how important he is for us," Robertson said.