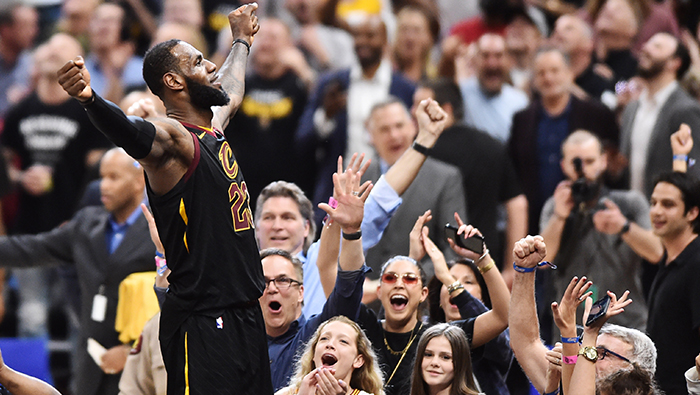 Cleveland, Ohio: LeBron James banked in a running floater as time expired to cap off a 38-point effort, and the Cleveland Cavaliers took a commanding 3-0 series lead with a dramatic 105-103 victory over the visiting Toronto Raptors on Saturday night at Quicken Loans Arena.
Kevin Love recorded 21 points and 16 rebounds as fourth-seeded Cleveland defeated Toronto for the ninth straight time during the postseason. Kyle Korver made four 3-pointers while scoring 18 points, George Hill had 12 points and Jeff Green tallied 11 for the Cavaliers.
Kyle Lowry had 27 points and seven assists for the top-seeded Raptors, who are one defeat away from being eliminated by Cleveland in the playoffs for the third straight season. Sidekick DeMar DeRozan had an off night with just eight points on 3-of-12 shooting and didn't play in the final quarter.
Game 4 of the Eastern Conference semifinal series is Monday in Cleveland.
On the decisive play, James received the inbounds pass with eight seconds left under the opposite basket. He drove the length of the floor, headed slightly to the left of the lane and smoothly kissed the midrange jumper off the glass.
"Tie game, down 1 or whatever the case may be, I live for those moments," James said. "Like I told y'all in the Indiana series, that mental clock of being a kid and kind of telling myself, '3, 2, 1' and making the noise of the net, that 'woosh' sound, I've been doing that since I was 6, 7, 8 years old. Maybe even before that."
James added seven assists, six rebounds and three steals in his latest stellar effort.
"It's my job in the fourth (quarter) to close it," James said in a postgame interview with ESPN. "We could play so much better, but it was a gutsy win."
OG Anunoby scored 18 points and CJ Miles added 13 for Toronto, which committed 17 turnovers. Serge Ibaka had 11 points, eight rebounds and four blocked shots, and Jonas Valanciunas added 10 points and 11 rebounds for the Raptors.
Toronto recovered from a 17-point, third-quarter deficit to make it a one-possession game. Anunoby drained a 3-pointer to tie it at 103 with eight seconds remaining before James reached into his extensive bag of tricks.
James opened the second half with a dunk to give Cleveland a 57-40 lead before Toronto answered with 12 consecutive points to move within five.
The Cavaliers again pushed the lead back into the double digits, and Love's three-point play made it 73-59 with 3:21 to play. Love scored nine straight Cleveland points, including two free throws that accounted for a 77-61 edge.
The Raptors trailed by 14 entering the final stanza, but Lowry's 3-pointer and ensuing layup helped cut the Cavaliers' lead to 85-80 with 8:12 left. James scored the next five points to push the Cleveland lead right back to 10 points.
The Raptors eventually trimmed their deficit to 97-95 with 2:52 remaining thanks to Anunoby's 3-pointer and Lowry's two free throws.
James scored 15 first-half points as the Cavaliers established a 55-40 advantage.
Cleveland led 16-4 less than seven minutes into the game as the Raptors missed 10 of their 12 shots. The Cavaliers later finished the half with a 16-2 surge to take the 15-point lead into the break.
DeRozan, who averaged 23 points per game in the regular season and was producing 25.8 points per game in the playoffs, never got going.
He said of sitting out down the stretch, "It was extremely hard. Extremely hard. I never want to be over there watching, especially the competitor I am. I just want to be out there helping my team way more than anything. So it definitely sucks to be watching.
"We've got to give credit to (the Cavaliers). We fought hard and gave ourselves a chance to win."