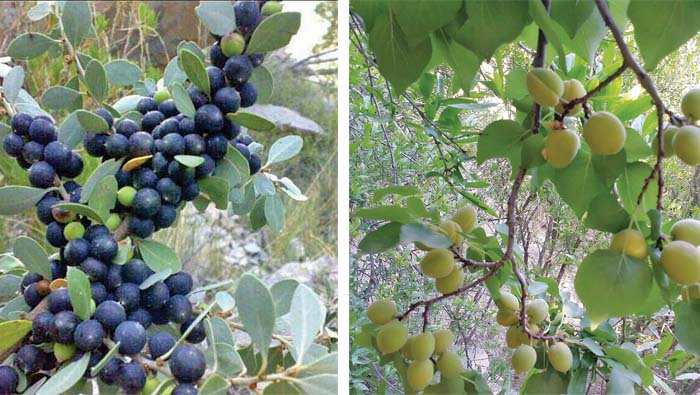 Nakhal: Farmers in Wadi Mastal in the Wilayat of Nakhal in the Governorate of South Al Batinah, are harvesting the fruits of apricot trees and mountain berries in the villages of the valley.
The valley hosts various types of agricultural crop, whether in the mountains or the green oases that are frequented by tourists and visitors.
Al Qoura Village is one of the villages in Wadi Mastal, in addition to a number of other villages, such as Al Hajjar, Wakan, Misfat Al Qoura, Al Shis, Al Aqar, Haddish, Al Khadad, Al Khadra, Ardh Al Shawaa, Al Misfat and Al Dhahir, all of which are archaeological and agricultural villages in Wadi Mastal, in the Wilayat of Nakhal.
Wahab bin Zahran Al Riyami, a villager from Al Qoura said that the village has a number of seasonal crops, such as grapes, garlic, pomegranates, apricots, figs, bergamot orange, peaches, and berries, and is watered by Falaj Al Aqar, Falaj Al Mafra, and Falaj Al Wasta’a, which start at the top of the mountain.
About apricot harvesting Al-Riyami added said: “The season started this year with the appearance of apricot flowers in mid-March and was harvested in mid-April and lasts only for two weeks. It is marketed in the Souq of Nakhal and other neighbouring markets in the Governorate of South Al Batinah.
On the first day of the crop the price of one kg could reach OMR17, and gradually decreases with the increase of supply to about OMR5. As for the mountain berries, the harvest season starts in April each year and lasts for about two months.
The price of a pail (about 6 kg) starts at about OMR50. After increasing of the supply and availability of it in the market it goes down to OMR20. The harvesting of mountain berries starts at dawn until the afternoon.
Rauf bin Mohammed Al Hadhrami, a resident of the Wilayat of Nakhal, said, “This season could be better exploited, especially if it is promoted in the Gulf and the region, and the development of crops growing in these mountain villages, in addition to a tourist programme for companies coinciding these crops and coordination with the villagers to pack in special baskets and display in a healthy and organised manner for sale as the good marketing is one of the most important attractions.”
He added that crop seasons are more concentrated in the summer, which starts from April to August, the time to harvest the fruits of apricots, berries, grapes, bergamot orange and pomegranate. The winter season, which starts from December to February, is the harvest of the green bean, which is sold in the market of the wilayat.
The residents of Wadi Mastal villages in the Wilayat of Nakhal, especially the village of Wakan and Al Qoura Village, pay attention to these crops, especially with the beginning of apricot fruits, where these crops are sold in the market of the wilayat almost daily from early morning.
The green hills in the Wilayat of Nakhal, where many rare wild plants grow on the ranges adjacent to Al Jabal Al Akhdhar on the one hand, lie behind the Sumail mountain ranges in the governorate of A’Dakhiliyah, which is a point of convergence between the rocky canyons of the West Hajar mountain ranges.
Al-Riyami added the Village of Wakan is one of the beautiful villages that tourists visit throughout the year. It is registered with the Ministry of Tourism as a tourist station in the Governorate of South Al Batinah and receives a large number of visitors daily.