Argentina shocks currency back to life with rate hikes 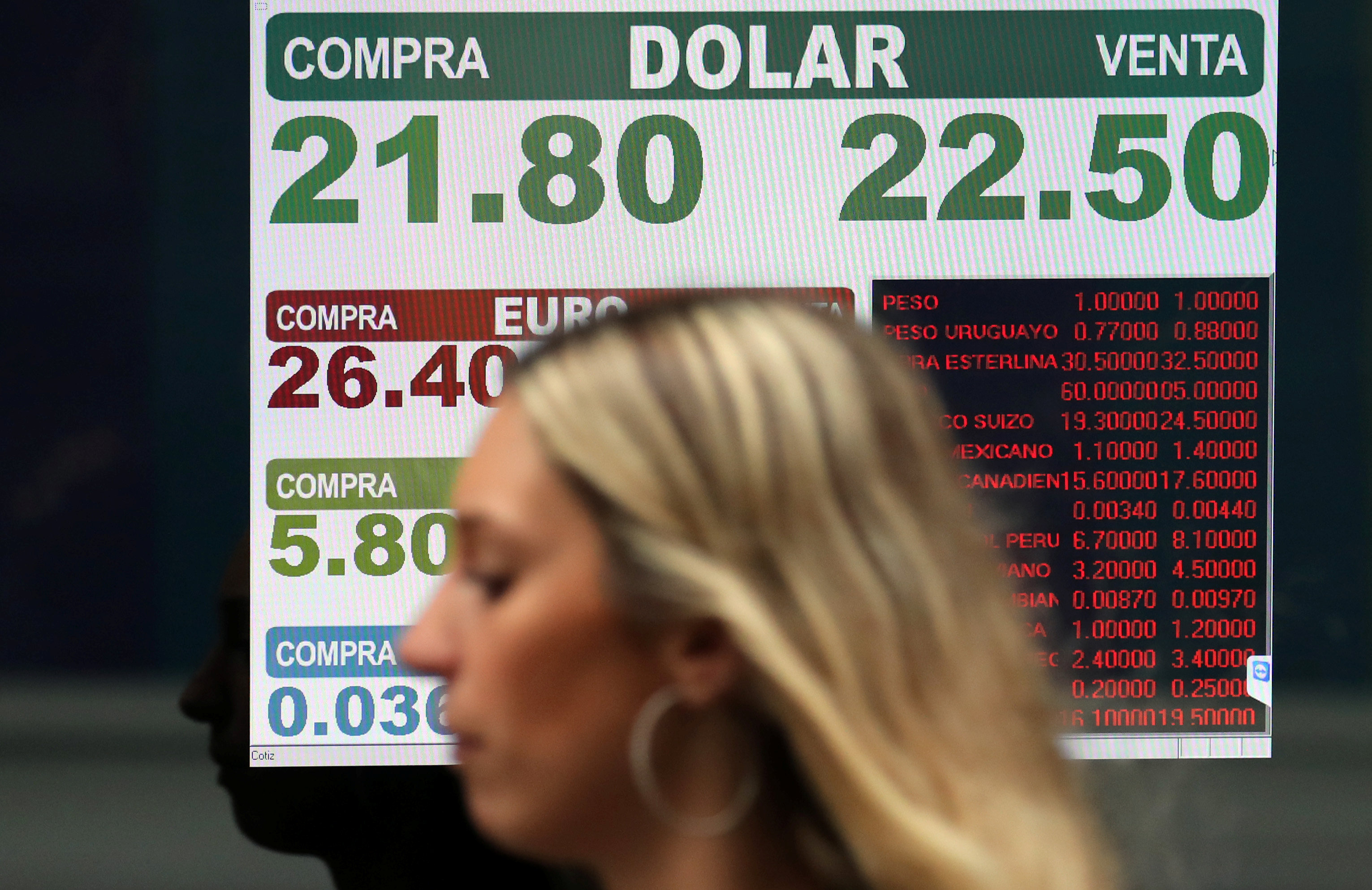 Buenos Aires: Argentina's government and central bank jolted the country's battered peso currency back to life on Friday with a set of announcements intended to restore confidence in the president's ability to deliver sustainable growth while cutting inflation.
The central bank sharply raised its monetary policy rate to 40 per cent, sparking a 5.12 per cent jump in the local peso to 21.88 per US dollar. The government meanwhile sought to sooth investors' nerves by cutting its fiscal deficit target to 2.7 per cent of gross domestic product (GDP).
The moves followed a week of dramatic weakening in the peso, which sank 7.83 per cent just on Thursday.
The central bank said in a statement it would keep using all tools at its disposal in its effort to reach the country's 15 per cent inflation target for this year, a goal that many private economists dismiss as unrealistic.
Fitch Ratings revised its outlook on Argentina's 'B' rating to "stable" from "positive," reflecting "high inflation and economic volatility" and "political headwinds that have intensified beyond Fitch's prior expectations."
President Mauricio Macri, for example, has been criticised by the opposition for imposing higher utility bills on average Argentinians when he cut the generous subsidies that were a hallmark of the previous administration. The action has helped Macri control government spending but at the cost of higher inflation.
Treasury Minister Nicolas Dujovne told reporters the government stood by the 15 per cent target and supported the central bank's efforts. The bank has increased its key interest rate three times - on April 27, then on Thursday and again on Friday, yanking it up from 27.25 per cent.
On the fiscal front, investors had complained about the slow pace of progress in narrowing the primary deficit, which does not include interest payments on debt. The deficit target was 3.2 per cent of GDP before Dujovne tightened it to 2.7 per cent.
Speaking about the 0.5 percentage point cut in the deficit target, Dujovne said "... part of the cut comes from greater than expected resources at our disposal, because tax collection is evolving better."
The rest will come from an increased effort at generating savings, the minister added. The government expects 3 per cent economic expansion this year, including the risk presented by a drought that has shriveled the harvest of Argentina's main cash crop, soy, and could itself shave 1 percentage point off growth.
Dujovne acknowledged that jacked-up interest rates will be a drag on the economy, but said he hoped that the bank's tight monetary policies would be "transitory."
The government has adopted pro-growth policies ahead of Macri's expected 2019 re-election bid. The perception of political pressure on the bank to grease economic activity by keeping the money tap open had cast doubt on its willingness to raise interest rates.
The three rapid-fire rate hikes appeared to dispel those doubts.
"The rate hikes and new deficit target are positive developments," said Gabriel Zelpo, chief economist at local consultancy Elypsis.
"They needed to calm the market before there was a run on the peso," Zelpo added. "This is still an economy that is not stable and needs a lot of reform. They're doing everything they can."
A spike in the US dollar over the last three weeks and expectations of accelerating US inflation have soured investor appetite for emerging markets. The specifics of Argentina, stymied by one of the world's highest inflation rates, have made it stand out as particularly vulnerable to investment losses.
Consumer prices in Argentina rose 2.3 per cent in March, putting the 12-month inflation rate at 25.4 per cent.
The markets had given Macri the benefit of the doubt for more than two years after taking power in late 2015. Soon after his inauguration, Macri ditched the previous government's foreign exchange and trade controls and helped the farm sector by cutting grains export taxes.
Macri also brought the country back into the international capital markets by settling protracted lawsuits brought by the holders of defaulted sovereign bonds left over from the country's 2001 financial meltdown.
Market confidence lasted until interest rates started climbing globally and the government, looking for money to help narrow the deficit, slapped a new tax on international investors last week.
Macri has long promised to "normalize" the troubled Argentine economy where memories of an economic crisis and bank run in 2001 still haunt older Argentinians.
Monica Osorio, who lives in the town of Quilmes on the outskirts of Buenos Aires, said she was struggling to make ends meet. "Honestly I would like to buy dollars, but I cannot buy anything because I have not been able to save," the 59-year-old said.