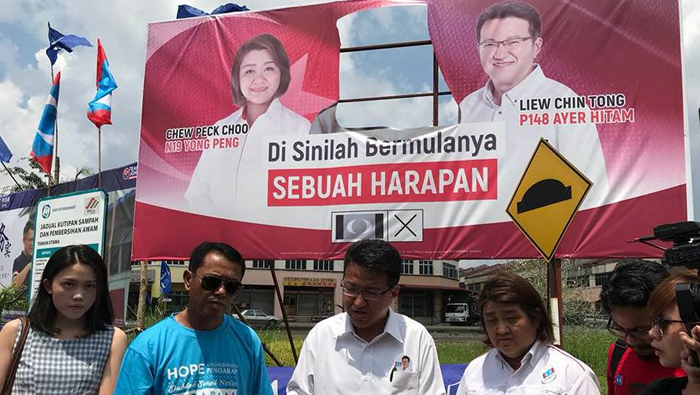 Kuala Lumpur: The road to Malaysia's May 9 general election is getting thornier for opposition leader Mahathir Mohamad: officials are cutting out or painting over his image on some billboards and police are investigating him for spreading "fake news".
Mahathir and other opposition leaders say the moves are intended to further help the prospects of Prime Minister Najib Razak, whose ruling coalition already enjoys a near-monopoly of coverage in newspapers and on television and radio.
"I have never seen an election like this. It hasn't yet begun but efforts to cheat are already underway," Mahathir, 92, said at an election rally on Thursday.
"You can see that this time Najib is so afraid, he is afraid of even a picture." Najib's Barisan Nasional (BN) alliance dismissed the allegations. "Every election we hear the same complaints," Communications Minister Salleh Said Keruak said in response to Mahathir's comments.
Najib has said the opposition has subjected the government to a "tsunami of slander".
BN, which analysts say is facing its toughest election since it took power when Malaysia became independent six decades ago, has previously said the opposition claims are an effort to win sympathy votes and smear the reputation of the Election Commission.
Malaysia's longest-serving prime minister, Mahathir was once a mentor of Najib but turned against him and joined the opposition over a multi-billion-dollar financial scandal that has plagued the government since 2015.
Pictures of Mahathir have been removed from billboards in a constituency in Johor state, an opposition MP has said.
The Election Commission said that was done to comply with new guidelines regulating the use of images of party officials on campaign materials. Mahathir said his allegations of "cheating" also referred to the redrawing of electoral boundaries just weeks before the poll, which his camp says will favour the government.
The Election Commission said the redrawing of the electoral map in March was free from political interference, and says its rules on campaign materials are being applied equitably.
A recent report by political risk consultancy Eurasia Group said that although support for the opposition appeared to be gaining momentum, it had only a 15 per cent chance of winning.
"Najib has placed too many obstacles in their way and there is too little time before the vote on May 9 to overcome those," said Eurasia's Asia director, Peter Mumford.
A BN spokesman said the government had placed no such obstacles.
"The opposition are preparing excuses for when they lose, but Malaysians - whose free and fair votes will determine the result - know better," the spokesman said.
In April, Najib's government passed an anti-fake news law seen by critics as a move to suppress dissent and free speech.
Within four weeks of the introduction of the law, Mahathir was under investigation for spreading "fake news" over claims his plane was sabotaged in the run up to elections.
"Go ahead and charge me," Mahathir said on Thursday.
The opposition also says BN has stifled publicity for its candidates and campaigns, which get negligible coverage on national television, radio or newspapers, most of which are state-linked or seen as supportive of the government.
There are no laws stipulating equal broadcast airtime for political parties in Malaysia, though in recent years this has become less of a disadvantage for the opposition because of the growing importance of social media.
Elections in Malaysia have mostly been seen by international observers as lopsided and in favour of BN, including under Mahathir, who was prime minister from 1981 to 2003.
A US State Department human rights report released in April said opposition parties in Malaysia have been unable to compete on equal terms with BN because of "malapportionment" of parliament constituencies and government control over traditional media outlets.
"The lack of equal access to media was a serious problem for the opposition in national elections," the report said.
"News about the opposition was restricted and reported in a biased fashion in print and broadcast media."