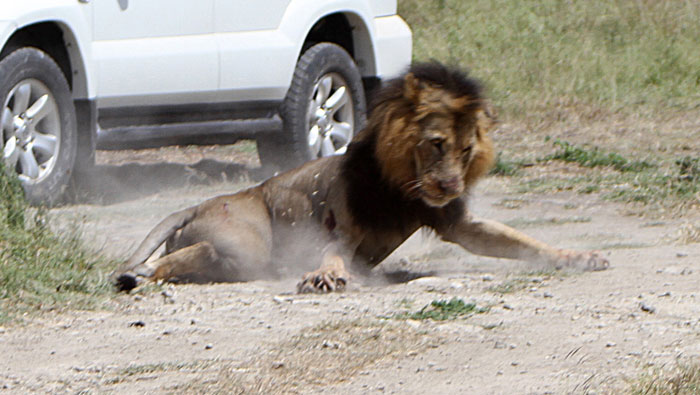 Nairobi: A new road and rail project cutting through a nature reserve on the outskirts of Nairobi threatens wildlife, livestock and people, conservationists said on Friday, after two lions were killed this week.
Kenyan wildlife rangers shot dead a male lion named "Mohawk" on Wednesday after it strayed from Nairobi National Park and attacked and injured a resident.
The next day rangers found the body of another lion outside the reserve, speared to death in a township south of Nairobi.
Conservationists said construction work on the transport projects was affecting animal behaviour and leading more big cats to try to escape in search of quieter hunting grounds.
"Before construction started in the park, the lions were not escaping, so there are indications that the noise and blasting is affecting their movements," said Robert Ndetei, species conservation manager at World Wildlife Fund's Nairobi office.
"If you don't plan properly, if you don't do proper environmental-impact assessments, then you are doomed to fail, and at the Nairobi National Park this could lead to more lions and other animals coming into contact with a growing human presence," Ndetei told Reuters.
Nairobi National Park is home to about 35 lions. There are about 2,000 left in the whole of Kenya.
Kitili Mbathi, director general of Kenya Wildlife Service, agreed that the construction work was to blame for the increasing number of lions straying from the park.
"Yes, it has been disruptive but we are trying and they (the contractors) are trying to minimise the disruption," he told Reuters by phone.
He said the road was nearly complete, while the main construction work on the railway should be finished in June, restoring some calm.
"We have a temporary fence in certain places there, so now we will be able to put in a permanent electric fence. Eventually, when all the construction is finished, from that side of the park, we don't expect any more disruptions," he said.
Mbathi said the wildlife service had increased patrols along the perimeter of the park.
"A key concern is that the developer is not taking proper care to ensure there is less disturbance of the habitat while also not securing the perimeter fencing," said Lucy Waruingi, acting secretary of the Conservation Alliance of Kenya.
Human settlements and activity have long been encroaching on the Nairobi National Park, which was established in 1946 and gives visitors the chance to see lions, giraffes, zebras and other wildlife against a backdrop of high-rise buildings.
The road under construction will link Nairobi airport with the city centre, while the new railway line will connect the capital with port city Mombasa.
Kenya's economy is expected to grow by 5.9 per cent this year and by 6 per cent in 2017, increasing pressure on the environment and exacerbating conflicts between humans and wildlife. Wildlife tourism is an essential foreign revenue earner for East Africa's largest economy.